There was a large contingent of American football players from the NFL’s Las Vegas Raiders in attendance at the Apex Center in Las Vegas. UFC Fight Night featuring Thiago Santos versus Johnny Walker provided an entertaining evening as usual. Without further ado, let’s get into it!

Thiago Santos and Johnny Walker are both southpaws from Brazil. It is rare that two fighters featured in the main event have that much in common, but the two light heavyweights were selected for more than just their commonalities. Both men are known to possess massive knockout power. No one would place a bet on the fight going the distance. Everyone was wrong.

This was a fairly even fight, but it did not contain the type of excitement that warrants a rematch. It is not out of the question that these two men will fight again but the matchup will not be in high demand. Both men had so much respect for the other’s power that it made each fighter cautious, sometimes even bordering on downright timidity.

In round one, Walker outpointed Santos by being the more active of the two fighters. Neither man attempted a closed fist strike in the entire round but Walker made sure to score on an abundance of calf kicks.

In rounds two and three, Santos became the aggressor. He had a nice sequence where he executed a left kick, immediately followed by a closed fist left hook, He also controlled the center of the octagon with calf kicks.

In round four, Walker evened the fight. His best moment of the night came with a side left body kick with his left leg, followed by a lefthanded overhand strike. Round five was fairly even; neither man showed the typical desperation normally affiliated with the final round of an even fight. Santos owned the biggest moment of the round with a resounding overhand left that drew oohs and ahs from the crowd. Ultimately, the judges’ scorecards were unanimous in favor of Santos. I can’t help but think that his overhand left in round five single handedly gave him the decision.

Kevin Holland entered the octagon with a cockiness that is dangerous for a fighter to possess. No matter how confident a fighter is, they should never be dismissive of their opponent. In the world of combat sports, any man is capable of inflicting damage on the other. Kevin Holland found out the hard way.

Kyle Daukaus was all about business coming into the fight. From the opening bell, he was the aggressor and attempted a takedown. Kevin Holland was forced to back into the cage. In an effort to minimize Daukaus’ efforts, Holland began openly talking to Daniel Cormier, who was the ringside announcer for ESPN. Eventually the struggle against the cage looked pointless and the referee separated the two men.

Then karma decided to rear its ugly head. While both men attempted a strike, there was a clash of heads. Holland absorbed the worst of it, instantly being dazed and falling face forwards into the canvas. Capitalizing on the moment, Daukaus then put Holland in a rear chokehold and caused him to tap out.

After an extensive review session, the fight was ruled a no contest. The decision was based on the fact that Holland was dazed due to the clash of heads, and that led to the chokehold and subsequent tap out. Normally, I wouldn’t protest such a ruling because it is inline with the rule book. However, Holland’s conversation with the ringside announcer rubbed me wrong. If you’re being pinned to the cage by your opponent, you should be focused on getting out of his grasp, not trying to send a subliminal message that he’s not affecting you. In my book, Holland got his butt whooped tonight and he deserved it. I don’t care what the official scorecard says.

Alex Oliveira is known for walking to the octagon with a smile on his face and joking with his team before fights. Tonight, as he emerged from the locker room, there were tears streaming down his face and he looked very somber.

Niko Price scored a takedown early in round one. He held Oliveira on the mat and maintained dominant position for the entire round, mixing in timely strikes along the way. Alex Oliveira responded by making round two a complete reversal of round one. After scoring an early takedown, he maintained the dominant position for the rest of the round no matter how desperately Price struggled to get free.

In round three, both fighters looked fatigued. Both Price and Oliveira attempted wild swings that failed to connect. With 20 seconds left in the round, Price scored a big takedown. He wound up winning a unanimous decision at the end of the fight. Ultimately, it was his third round takedown that gave him the victory.

Misha Cirkunov and Krzysztof Jotko both started round one very cautiously. Although Cirkunov scored an early takedown, Jotko was able to fight to his feet and avoid being dominated on the mat. Jotko was able to execute a good number of calf kicks later in the round. He was also able to nullify another takedown attempt by Cirkunov.

In round two, Cirkunov attempted several takedowns to no avail. Jotko continued to put together combinations, this time using both his hands and his feet to score points. In round three Jotko, kept applying pressure. Cirkunov was able to interrupt the onslaught with a takedown but Jotko eventually freed himself. The round was stopped with about a minute and a half left because Cirkunov had been poked in the eye. When the fight resumed, Jotko remained aggressive and even scored a takedown of his own.

Jotko won via a split decision. The only question I have is, who voted in favor of Cirkunov and what fight were they watching?

Mike Breeden missed the 156 pound weight limit for lightweights; he weighed in at 158 1/2 pounds. Alexander Hernandez’s camp agreed to take the fight anyways.

Hernandez waisted no time in going to work. He started round one with a left hook, followed by a straight right hand, left uppercut and an overhand right. The overhand right knocked Breeden out cold. It was a first round knockout victory and an easy night for Alexander Hernandez.

After watching the epic battle that Alexander Volkanovski and Brian Ortega put on last week, I was disappointed in Santos versus Walker. However, there’s a reason Volkanovski and Ortega were on pay-per-view; they are better performers who are deserving of a better platform and a bigger payday. As a fight fan, last week was so entertaining that it spoiled me. This week’s main event brought me back down to earth.

UFC Fight Night returns to the Apex Center in Las Vegas next week with a slew of fights headlined by Mackenzie Dern versus Marina Rodriguez. As always, we’ll have all the latest updates on the outcomes of the fights, as well as in depth analysis available right here at World In Sport! 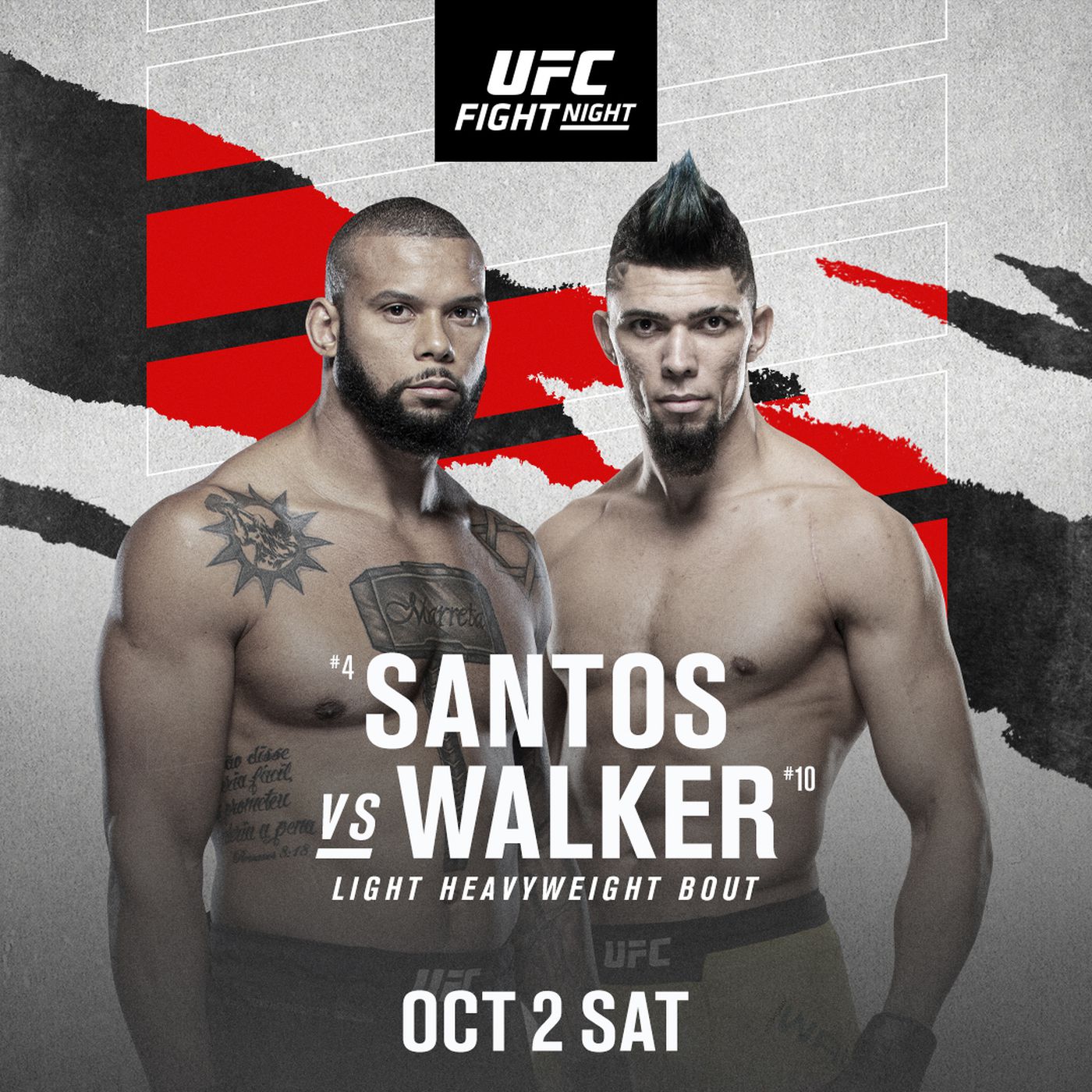