The Modern Premier League football has become ever so intense nowadays, it’s a lot of running, people judge the players on the metrics and statistics, the players are assessed based on no. of tackles or interceptions they make during the game, this also has changed the perception of players to focus more on the Athletic part of the game then the technical part.

It’s hard these days to find a classy flair Iniesta-Esque player who slows the game down and breaks the opposition or looks for a long ball it’s more about dribbles, pace, prowess maybe our academy systems are to blame for this.

But Anyways, today we’re going to take a look at the top 5 naturally gifted players to grace the Emirates Stadium in the last decade. And by ‘Naturally talented’ I mean the real ballers, who make the game look beautiful, easy, and simple and are equally good at finishing off chances gracefully without any fuss on it.

Regarded as the Silent Genius, the German was is widely known for technical skills, creativity, agility, and finesse. He can play an exquisite pass out of the blue. He was brought on from Real Madrid for a club record of £42.30m with high expectations and why not he’s scored 27 goals and further laid down 81 assists in 159 appearances for the Galacticos and revered as being one of the world’s best talents.

His time at Arsenal was no less than an immense success he directly contributed to 111 goals(44 goals and 77 assists) in 254 appearances over 6 seasons at the club. He won 4 FA Cups and reached the Europa League final 2018-19 season in Baku, where we suffered an embarrassing 4-1 defeat to Chelsea. It’s a shame that we never won a Premier League title during his stay we came close in 2015-16 season when Leicester won it, In that Ozil did create the most number of chances in the premier league by a mile, only for Giroud to Underperform his Xg poorly and results in less number of goals.

The timing and creativity of his passes are exceptional, The quality on the ball and the vision, his quick thinking, and quick execution of passes is a rare thing in modern days. Described as “The Sorcerer’s Apprentice” by Cristiano Ronaldo, Ozil can drift in and out of the game but when he gets going in flow he can produce magic.

Like all good sorcerors, the trick is in the deceit. On the pitch, Ozil has the equivalent of immensely ingenious sleight of hand. When he makes a pass, receives the ball, or makes a run, he has the knack of making it look like he has moved a split-second too late, when in fact he has timed it to perfection. When he plays through-balls his body rarely gives any clues as to the direction and power of the pass – the ball simply jumps off his foot and into the right place. The accuracy of his weighted passes and free kicks has a different kind of Romanticism.

His decision-making ability and in-game intelligence to deliver decisive passes are arguably some of the best in world football. The end was not that we as fans wanted it to be but it’s a good argument that people see his laid-back approach as laziness as this isn’t the case. Anyways, For many historians or veteran Gunners, he may be just one of the greats but for us young fans he’s a Legend.

Plenty of Arsenal fans still remember the talent of Alexis Sanchez despite the Chilean’s form falling off the proverbial pinnacle since leaving the Emirates. On pure ability, he was up there as one of the best wingers of his time at Arsenal.

The Chilean forward was a superstar during his time with the Gunners, having signed from Barcelona in 2014 for a rumoured £35million.
At the time it was considered as a big coup, as he was regularly playing for the Blaugrana’s it’s only due to the much-anticipated arrival of Luis Suarez to Barcelona in a 75million deal which forced him to leave the La Liga Giants.

In all, Sanchez made 166 appearances for the Gunners. He scored 80 goals and provided 46 assists, which turns out to be a goal contribution every 1.32 games. For a winger these stats are massive.

In crucial Wembley fixtures against Reading, Aston Villa, Manchester City, and Chelsea, he has almost single-handedly dragged the Gunners to glory with hugely prominent displays and decisive goals.

His mentality, stamina levels, technique, dazzling skills, and intelligence have remained unmatched from start to finish. He can get many off their seats with powerful runs and unexpected finishes.

Despite winning two club Player of the Season awards, two FA Cups, and one inclusion in the PFA Team of the Year, only a few will consider him in the same breath as the Legends group.

It’s quite sad that a player with so much talent and ability will not be remembered as a club legend by the fans of any of his respective clubs due to the sour end with all of them. He should have never left.

He left for Glory but never really achieved it. Many still wonder what he could have been if he sticks out at the Emirates.

There’s a famous phrase “If Arsenal were a clock, Cesc Fabregas would be the ticking second hand” he is very reliable at keeping things at bay and everything moving, dictating at all times. Very few players can strike a ball and make it look as aesthetically pleasing

He arrived from Barcelona at a very young age and became an Arsenal player at the age of 16. His technical ability was nurtured by Arséne Wenger to make him the most dangerous creative attacking midfielder of his generation. He has effortless swagger and adulation at his time at Arsenal which slowly faded since leaving the Gunners.
He made his debut at 16, scored 57 goals in 303 appearances, became club captain at 21 and talisman, and developed into one of the Premier League era’s great playmakers, creating more chances between 2006 and 2011 than any player in Europe’s top five leagues.

Fabregas’ subtlety, technique, vision, elegantly, and instinct for when to play the killer pass made him an excellent playmaker for the Gunners, but he was also very much a hustle and bustle type box-to-box midfielder with a license to do anything he wants.

From a dynamic midfielder at Arsenal, he developed into a proper player with his intelligence and anticipation allowed him to run smarter a bit like Xavi or Iniesta.

He had to fill in the shoes of monumental legends. Old fans saw reminiscence of past greats who had played on Highbury pitch nearby. Young fans saw a hero to idolize. But there’s always an Animosity over the Way he Left the Emirates, he tried to force his move to Barcelona now and then.

He kissed the Chelsea badge during the club’s 2-0 win over Arsenal. This behaviour incensed the Arsenal fans, and cast serious aspersions and doubts over his supposed loyalty to the Gunners in the first place. Because of this act and disloyalty to Arsenal, the gunners have never regarded him as a Legend only a talented wunderkind.
His lack of Achievements at the club too contributes to his criticism and unlike Thierry Henry, Arsenal fans will never forgive him.

There are other arguments too that he wanted to come back to Arsenal when he decided to move to Premier League from the Blaugrana club due to lack of playing time, but the Gunners already have Ozil at his position which hindered him him him his move and he eventually went to Chelsea.

Anyways, he’s the most talented and naturally gifted player that we have in the Emirates era and many still wonder he’ll be regarded as a Legend if he was a bit more loyal to the Gunners.

Santi Cazorla hadn’t played for even two years when he was released by Arsenal in 2018, but there wasn’t a single Gunners fan out there who wasn’t sad to see him leaving the club.

A wonderful person and footballer Cazorla was a firm fan-favourite among the Arsenal faithful. Known as the Little Magician, the Spaniard scored 29 goals and assisted a further 45 in his 180 appearances for the gunners.

He was known for his grafted finishes from outside the box, Long Rangers, volleys, close angles cheeky goals, and classic free kicks. His attitude, love, and commitment to the club were there for everyone to see. He took pride in the Badge and gave his all when out on the field.

He is very versatile and mastered every role starting as Attacking Midfielder, then moved out wide when Ozil was signed, and in the third year, he was moved into a deeper role, that he perhaps proved his class more than ever, dictating play and controlling the tempo of the game like a puppet master pulling the strings.

He was also famous for not scoring normal goals even penalties he took a few of them are Rabona and dinks. He confused many with his dexterity and classic finishes with both feet.

Unlike some, He always turns up for big games. Despite his short tenure, Cazorla left behind so many memories at Arsenal. The midfield masterclass in the 2-0 win at Manchester City in January 2015, the free-kick in the FA Cup final against Hull City in 2014, the ability to play so well with either foot. But more than anything else, he has an infectious smile.

Many inside the club still believe the league title could have been won, such was his quality and influence. He had near to 10 Achilles operations and doctors even said he should forget about professional football.

But he proved that class always remains the same despite his age he directly contributed to 36 goals in 80 games for Villareal. An inspiration for all and without a fraction of a doubt one of the most gifted and talented players at Arsenal Ever.

When Robin arrived at Arsenal from Feyenoord in 2004 he was seen as a raw, supremely gifted, talent with a wand of a left foot but one with question marks over his temperament and a long-term replacement for Bergkamp.

In all, he had 132 goals in 278 appearances to say he was an utter goalscoring machine at his peak will not be wrong. He scored 30 goals in a single season.

He scored some fantastic goals and plenty of them are real beauties, especially volleys. The boy loved to execute a volley to perfection.

Proper volleys too, not the all too often misnamed striking of a ball after it has bounced. This was no tapper-in from a meter out, no in-off-his-arse merchant, no shinner or scuffer of lucky deflections or anything. The volleys are of pure artistic sense and can be put in the hall of a Football Museum.

That’s why fans loved him. Capable of scoring with either foot, with a header, short or long-range, he could do it all.

The cliche is that someone is either a great goal scorer or a scorer of great goals. RVP was both.
He achieved everything at the biggest stage to scoring wonderful scorpion goals and a diving header in the World Cup.

His move to Man United soured his relationship with the Gunners faithful. His 8 years stay at Arsenal is mostly riddled with injuries, not that it was his fault but at the time when we were struggling with repayments over Emirates, Wenger was forced to sell his key players in Fabregas, etc. we need Van Persie more than ever but he turned his back and became an escapist on the name of Ambition.

Do let us know your list of Arsenal’s gifted players in the comments below. 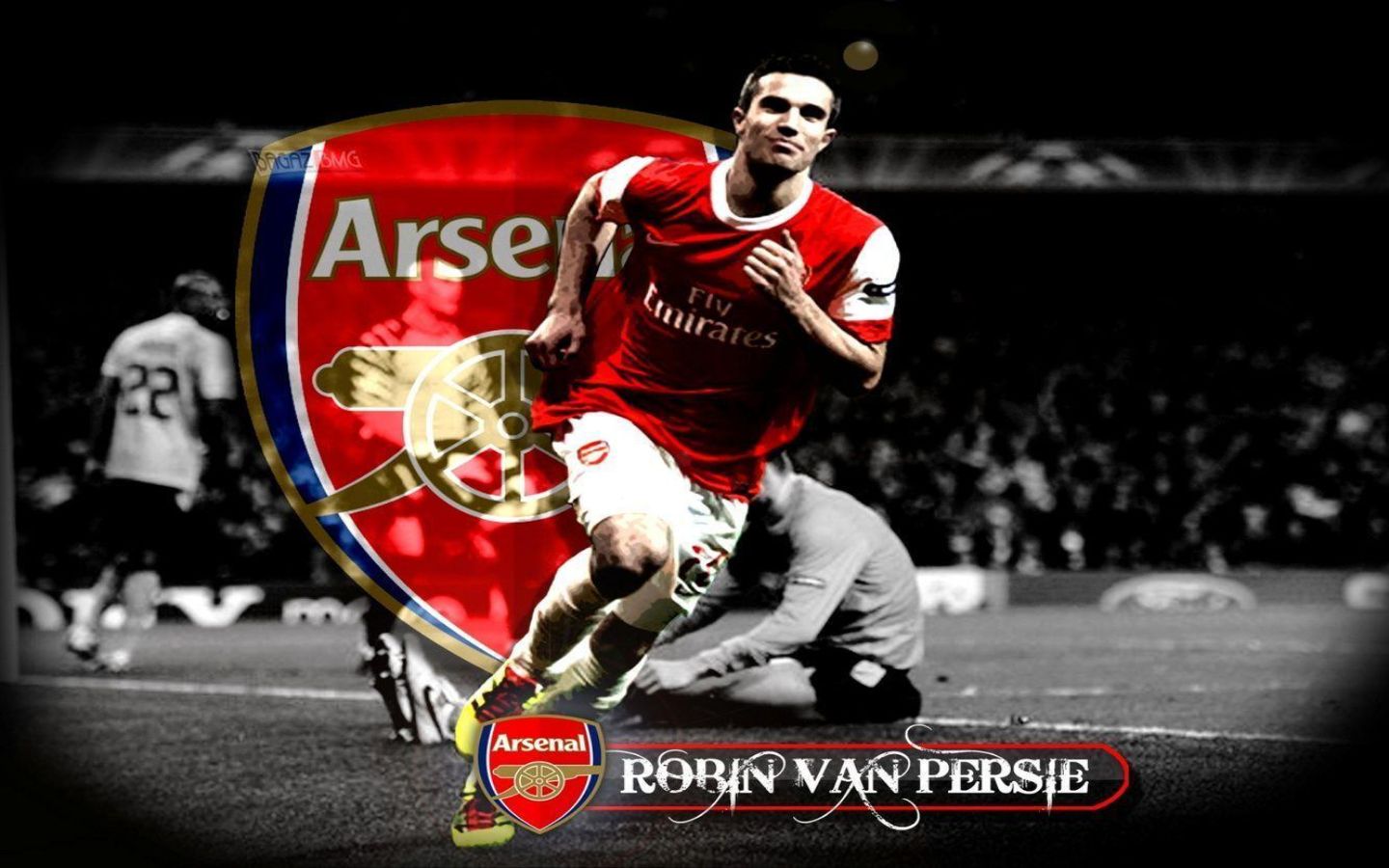