When Welterweight prospects Kamaru Usman and Leon Edwards met in the octagon, back in December of 2015, they were considered two of the most exciting up-and-comers in the sport. The battle did not disappoint; Usman emerged victorious via unanimous decision but each man had moments of brilliance. Fast forward to 2022 and the two men are set to meet again, only this time the circumstances are much different and the stakes are much higher. Usman is the reigning welterweight champion and the number one pound-for-pound fighter in the sport. Their rematch will be the main event of the evening during UFC 278. There’s a lot to unpack here; without further ado, let’s get into it!

Kamaru Usman hasn’t suffered a loss inside the octagon since May of 2013. Since then, he’s reeled off nineteen consecutive victories. Along the way, he’s managed to become the reigning UFC welterweight champion while also being recognized as the best pound-for-pound performer in the organization. His wars against Colby Covington were not only highly anticipated within the mixed martial arts community, they transcended the platform and reeled in casual sports fans who may not regularly watch combat sports. After five successful title defenses, the champion isn’t showing signs of slowing down any time soon.

Leon Edwards hasn’t lost a single fight since his bout against Kamaru Usman almost seven years ago. It would seem that the two should have met back in the octagon for a rematch earlier than this. However, Edwards has been known to produce victories without fanfare. The world of combat sports is as much about ticket sales as it is about the technicalities of the sport itself. Edwards has achieved one victory by submission and one victory by knockout over the last seven years; the rest of his wins have come via decision. The lack of stoppages is the reason why the organization’s upper-management has been in no rush to give Edwards a title shot. However, a win on August 20th would be vindication for Edwards, no matter how it comes about. Be sure to tune in when Usman and Edwards face off for the second time in their illustrious careers!

Middleweight challenger, Paulo Costa, has lost each of his last two fights. Having won the first thirteen fights of his career, Costa is still viewed by most pundits as an elite fighter in the division who has a chance at becoming a champion one day if he is able to update his technique. The fact that his losses were at the hands of reigning champion, Israel Adesanya, and perennial contender, Marvin Vettori, lead most observers to believe that Costa is still a step ahead of the “also rans” of the division. On August 20th, Costa will have the chance to remind the world why he is sixth in the organization’s divisional rankings.

Luke Rockhold was once the middleweight champion of Strikeforce MMA, with two successful title defenses. After making his UFC debut in May of 2013, it took him two-and-a-half years to reach the pinnacle of the most renowned mixed martial arts organization in the world. However, in December of 2015, he became the UFC’s middleweight champion at UFC 194. Losing the belt in his very next fight, to future ringside comedian, Michael Bisping, Rockhold has struggled to appear elite since his ultimate achievement. However, if he can emerge victorious on August 20th, it will breathe new life into what has already been a very accomplished career.

Current bantamweight challenger, José Aldo, is a featherweight legend. He once had seven consecutive successful title defenses of the UFC’s featherweight championship belt. Those seven title defenses were part of a remarkable unbeaten streak of eighteen fights. While a portion of those fights happened while Aldo was a member of other organizations, the mark he has left on the UFC is undeniable. At 35-years-old, he has been forthcoming about the fact that he is closer to the end of his career than the beginning, but mixed martial arts fans owe him a debt of gratitude whenever he decides to walk away from the octagon for good.

31-year-old Georgian bantamweight, Merab Dvalishvili, is on a seven fight win streak that dates back to April of 2018. In the four years during which he has gone unbeaten, Dvalishvili has managed to climb to the sixth spot in the UFC’s bantamweight rankings. Pundits have openly criticized his inactivity; he fought just one time during the calendar year of 2019. However whenever Dvalishvili enters the octagon, he gives the audience maximum effort and observers never feel cheated. You won’t want to miss it when Aldo and Dvalishvili wage war against one another on August 20th!

Yanan Wu became a professional mixed martial arts fighter back in 2013, when she was just 17-years-old. Although she’s had win streaks of seven fights and four fights, at different points in her career, she finds herself in the midst of a three fight losing streak. Lucie Pudilová is also a respected veteran of the sport, having been a professional fighter since 2014. These two bantamweights are each approaching a decade on the professional stage and neither of them has reached 30-years-old. Fans won’t want to miss these two time-tested athletes, each in their physical primes, going at it in the center of the octagon!

Light Heavyweight challenger Tyson Pedro is a Black Belt in both Japanese and Brazilian Jiu-Jitsu. His opponent, Harry Hunsucker is a self-taught barroom brawler from Kentucky, who competed in regional tournaments in the Southeast United States until the UFC invited him to compete on two editions of Fight Night in 2021. Pedro is the overwhelming favorite heading into their fight, but the world of combat sports is full of surprises. This is the classic case of the world-class-trained athlete versus the longshot from the shadows; you won’t want to miss it!

UFC 278 can be viewed via pay-per-view on BT Sport in the United Kingdom and on ESPN Plus in the United States. As always, we’ll have all the latest updates about the outcomes of the fights, as well as in depth analysis, available right here at World in Sport! 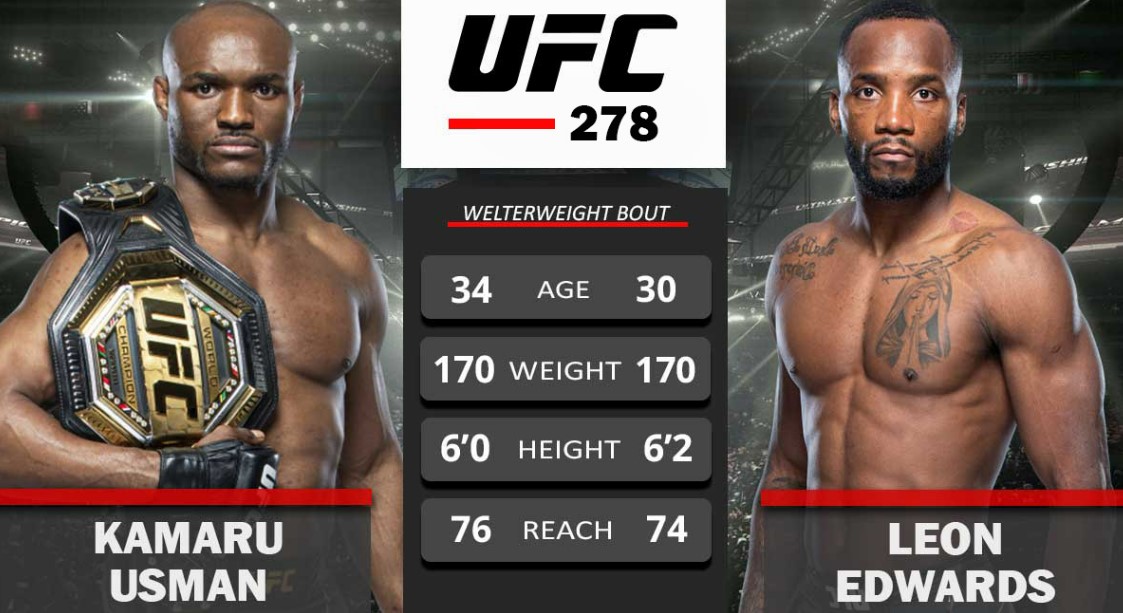