Norwegian tennis player Casper Ruud has bagged himself another chance to make history after reaching the men’s singles final of the US Open Grand Slam in Flushing Meadows, New York. The world No. 7 put on a flawless performance in his semi-final match to defeat Karen Khachanov by three sets to one (77-65, 6-2, 5-7, 6-2) and will face the winner of the second semi-final match between Frances Tiafoe (USA) and Carlos Alcaraz (Spain).

The final of the US Open on Sunday will be Casper Ruud’s second Grand Slam final of 2022. In June, he was defeated by Rafael Nadal in the final of the French Open at Roland Garros. However, Sunday’s final will not only be another huge opportunity for Ruud to claim his first Grand Slam. He will also aim to become the first Norwegian Grand Slam champion ever. Casper already made history at the French Open in June after he became the first Norwegian male tennis player ever to reach the singles final of a Grand Slam.

Ruud vs Alcaraz in the race for world No. 1

Sunday’s final in New York will not only determine the men’s 2022 US Open Champion, it will also determine who becomes the new World No 1. According to the ATP Tour rankings which are published every Monday, Casper is currently ranked No. 7 with 4,695 ranking points and Carlos is ranked No. 4 at 5,100 points. Once the rankings are reset, Medvedev, Zverev, Tsitsipas and Djokovic will all drop points, leaving the No. 1 spot open for a new tennis star.

Grand Slam titles are worth a whopping 2,000 ranking points on the ATP Tour. This means that if Casper Ruud wins the men’s final he will rise to 6,695 points to take the No. 1 spot. He will also become the world No. 1 if Alcaraz loses his semi-final match to Frances Tiafoe. This is because the Spaniard would only pick up 720 points for finishing as a semi-finalist. Carlos Alcaraz has had a phenomenal 2022 season so far, picking up 2 ATP Masters 1000 titles in Miami and Madrid. He has also been referred to as “unstoppable” by his fellow Spanish ‘idol’ Rafael Nadal.

The men’s final will commence on Sunday afternoon at 4 pm local time (9pm BST). For those watching in the UK, it will be available to stream on Amazon Prime Video. 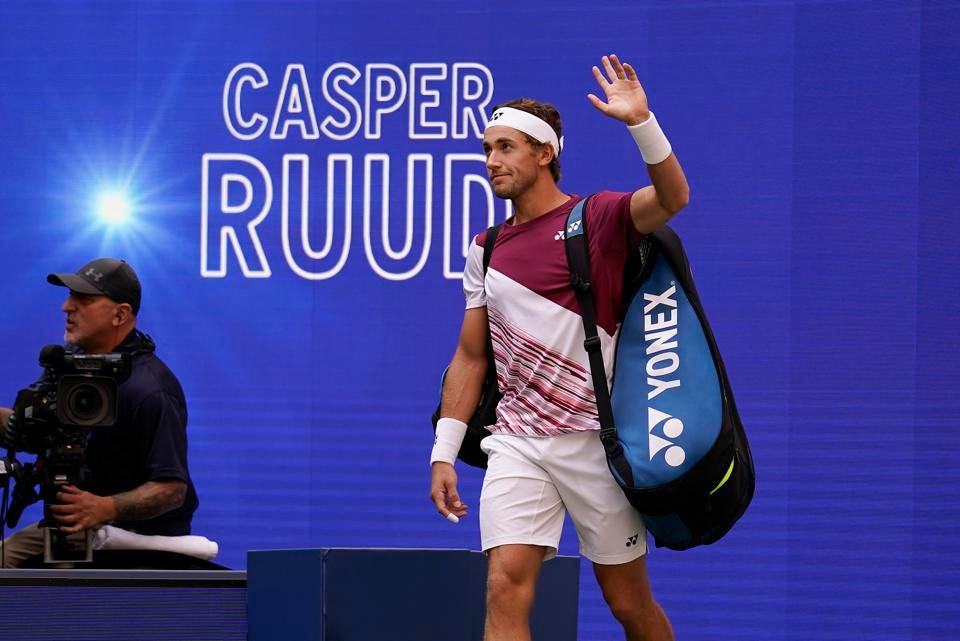