Gutless 10 men United put to the sword by rampant Watford

Goals from ex-United man, Joshua King, Ismaila Sarr, Joao Pedro, and man of the match, Dennis, who took off his shirt to wave his name to the delirious Watford fans, brought a thoroughly deserved and morale-boosting victory for the home side.

In fairness, and but for some glaring misses, it could have been more.

A twice-taken Sarr penalty, saved both times by De Gea, and golden chances for Sarr, Pedro, and Dennis should have buried United under an even-more emphatic scoreline.

With great credit, Watford emerged as the winners of the two teams recently thrashed 5-0 at home by Liverpool, and in the process poured more woe on to the head of United’s beleaguered manager, who spoke of ‘external and internal pressures’ of his own before kickoff.

Both teams needed a reaction after an International break which gave their supporters much time to digest recent painful defeats. The difference was that Watford produced a fitting reaction and United didn’t.

The home side showed hunger, desire, speed, a willingness to work hard for each other, energy, and brio from the first whistle to the last. It was joyful football for the home fans to watch, and they cheered their team to the rafters. If they can build on this performance, Ranieri’s team will soon climb the table away from the danger zone and leave others to fight out the relegation spots.

ALSO READ:  Who Will Replace Dean Smith At Aston Villa?

However, with all the praise they are due, they have much to thank their opponents for who came to Vicarage Road bearing gifts.

Such was the misplaced generosity of Manchester United players that they gave away the ball 17 times in the first half alone, inviting pressure they singularly and collectively could not deal with. A pressure that built and built upon a defense that was, frankly, to use a phrase, ‘all over the place’.

The United faithful who began the day in good voice were stunned into silence, hands in pockets, looking at each other with glum faces as time and again their team were overrun by Ranieri’s men, superbly marshaled here by ex-Tottenham midfielder, Moussa Sissoko, deployed to great effect just in front of the back four.

Manchester United were woeful. The lack of intensity, desire, inability to do the basics, giving the ball away cheaply, the calamitous mistakes, beggared belief. It was shambolic. It was pitiful, United were absolutely clueless in defense, wretched in midfield, and toothless in attack. Not for the first time did they let themselves, the fans, the manager, and the club down badly, and they were rightly punished for it.

Before the match, Solskjaer had urged his players to trust in themselves and each other, to, in his words, ‘turn up’, Well, the bus may have arrived at the ground, but his players clearly did not get off it.

With just five minutes on the clock, Shaw took a throw-in to Fernandes. Standing 30 yards from goal, the Portuguese midfielder inexplicably skied a volleyed punt towards his own area. A gleeful Joshua King pounced on the gift only to be bundled over by McTominay and the referee, Jon Moss, pointed to the spot.

United had a reprieve of sorts as De Gea saved the twice taken penalty kick, and a follow-up ‘goal’ by Femenia was rightly ruled out by VAR for encroachment.

But moments later United were behind. A ball was fed into the edge of the box where it found the live wire, Dennis. He twisted and turned Wan Bissaka inside out before delivering a ball into the centre. There, on the six-yard spot in splendid isolation, was Joshua King to steer the ball home for a tap in. 1-0 Watford.

More punishment was to come minutes later when Watford worked the ball down the right-hand channel to the excellent Femenia who laid a ball into Sarr, standing on his own on the edge of the area. In a flash the Senagalese attacker fired the ball across De Gea and into the net to wipe out his earlier miss and double the home side’s advantage.

Suddenly, Watford v Manchester United had more of a high-stakes feel than would otherwise be the case with United staring down the barrel of a heavy and unthinkable defeat.

Within minutes, the switch seemed to pay off. Martial fed Sancho on the right-wing in space. His whipped-in cross was met by Ronaldo’s towering header back across goal where Van de Beek stooped to conquer and half the deficit.

Did we have a game on our hands? Once again, United flattered to deceive.

Watford should have made it 3-1 two minutes later when King picked up the ball just inside the United half. The Norwegian ran unchallenged into the penalty area but seemed to run out of steam at the vital moment and De Gea easily dealt with his tame effort.

Right then, with all to play for, United imploded, with a real shoot yourself in the foot moment. Harry Maguire received the ball from De Gea, dithered on the edge of the box, was closed down, and then robbed of the ball by Tom Cleverley. Maguire responded to his embarrassment by hauling down the Watford midfielder.

Already on a yellow card, his wretched afternoon in the back four was over as the referee produced a second yellow and sent him off. Watford, already a goal to the good and now a man up, sensed it was time for the kill.

Ranieri sent on Joao Pedro, the twenty-year-old, Brazilian forward, to go and make a name for himself. He duly obliged, coming close on two occasions, before finding the net in the second minute of injury time to finish off a stricken United. The celebration was rapturous, with the young Watford striker overcome with the emotion of the moment.

But Watford were not finished. And in the 5th minute of injury time, a gleeful Dennis capped an outstanding performance as he outpaced Dalot, and lashed in a drive to the United net as Lindelof stood off him with his hands behind his back expecting a cross. That moment said it all.

The Watford faithful were in heaven, roaring their approval of Dennis and boisterously enjoying this moment when they were there to see their side put the once mighty Manchester United to the sword. 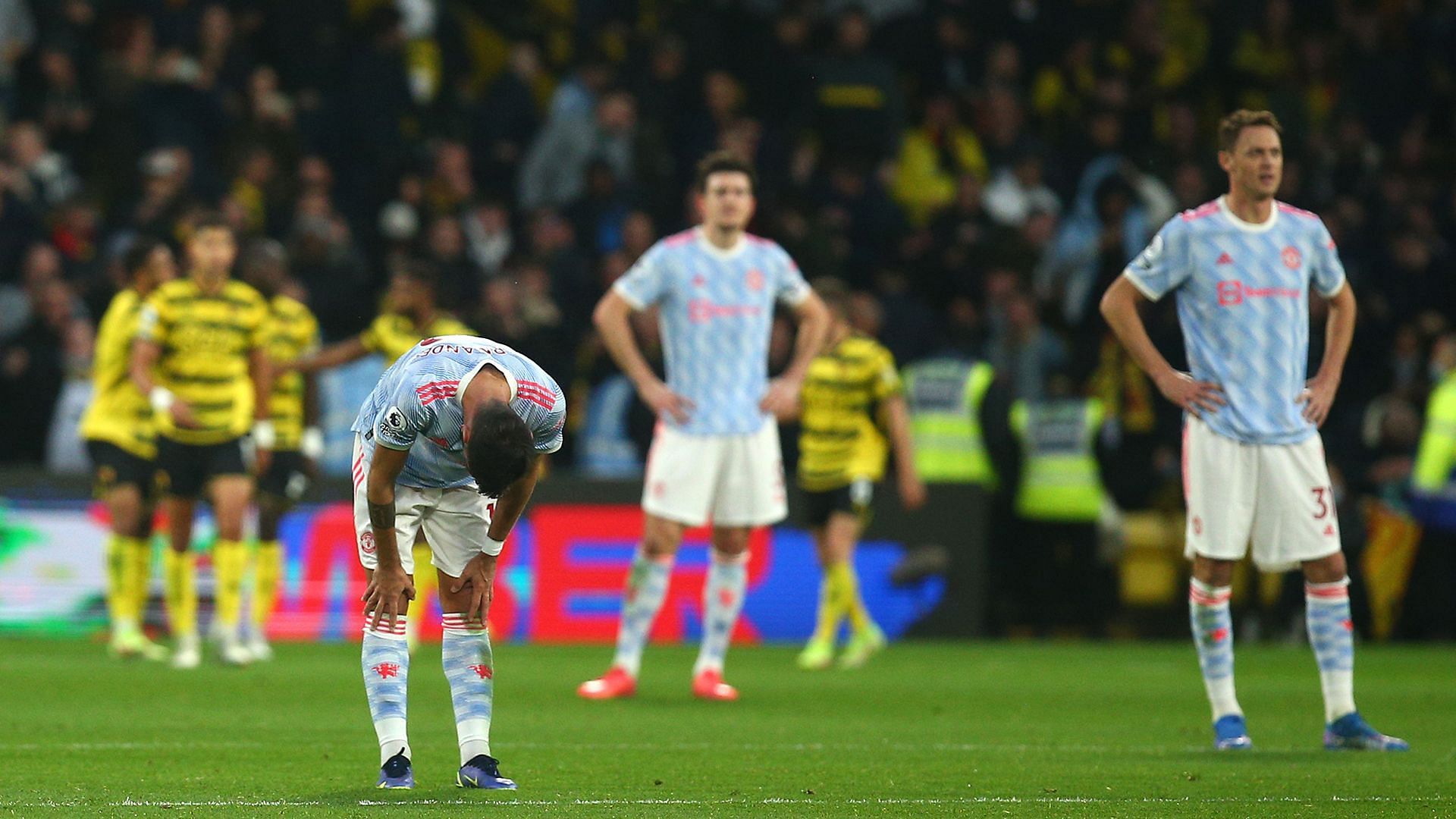