There have been multiple narratives around Lewis Hamilton and the delayed signing of an extension of his contract with Mercedes.

Multiple stories, all of them rumors basically have come out amidst speculations of a stand-off between the driver and the team that has enjoyed continued success since 2014 in the sport.

There have been rumors of Lewis Hamilton wanting more money or a bigger stake in the team, on the other hand, there have been rumors of Mercedes unwilling to give Lewis a long term contract, there are some other rumors that state Mercedes is not even willing to match the money they paid Lewis Hamilton in their previous contract.
Amidst all of this, there have been talks about Lewis Hamilton losing his bargaining power because of George Russell’s performance at the Sakhir GP. Many pundits have given their views as well, as we saw Eddie Jordan famously said that he would have fired Hamilton if he were to make such demands.

Keeping recent comments from Toto Wolff in mind, it seems that Mercedes and Lewis Hamilton are on their way to finalizing the contract. Even if they weren’t though, it’s important to look at the kind of impact dropping Hamilton would have had on the German team. Sure they have the fastest car on the grid, sure they have George Russell in reserve, but in totality, can Mercedes afford to let Lewis go?

As you can see from the title, I feel dropping Lewis Hamilton might not be a great idea for Mercedes.

#1 Lewis Hamilton is the best driver on the grid

Let’s be honest about a few things. There aren’t many drivers on the grid that can do what Lewis did in Turkey in 2020. Having a car incapable of winning and taking the chequered flag with it is something not many can boast of in their careers. Mercedes, in all likelihood, would not have won the race in Turkey. Valterri Bottas showed that by finishing the race a lap down. It was only Lewis and his ability that made this possible for him.

This is the gap that Lewis fills in that Mercedes. On days when the car is not up to the mark, Lewis would still ensure he extracts the maximum. Red Bull dominated the last weekend of the 2020 season. Max Verstappen got pole and won the race at Abu Dhabi with a considerable margin in hand. What if Red Bull can close the gap to Mercedes? They would need Lewis in the car to challenge the Red Bull and fight for the Championship.

#2 The change in regulations in 2022 can shrink Mercedes’ advantage

The 2022 regulations have two specific goals. The first is decreasing the budget for the teams and the second is bringing the grid closer when it comes to pace. With the changes in regulations, the role and the impact of drivers on the race is bound to increase. Now, for Mercedes to continue their reign at the top of the sport they would need someone of the caliber of Lewis to win those crucial races, to be consistent, and most importantly to help them win the titles.

A Bottas, would not be able to do it, and putting the pressure on a George Russell to win them the titles would be unfair on the young British driver who is yet to prove himself. The new Formula One era is expected to be the one where the drivers would be the kings and if there ever was a time when Mercedes-would need Lewis to drive their car it has to be this one.

#3 Russell is yet to prove himself

George Russell had a great weekend at Sakhir, he showed great pace and was able to display a great run of pace. But at the end of the day, it’s just one weekend. Can he do it race after race? Can he keep the pressure of Max Verstappen at bay all the time? Can he perform in all conditions? Can he win when the car is not up to the mark?

These are all the questions whose answers Russell is yet to give. He’s driven two seasons in a backmarker with Robert Kubica and Nicholas Latifi as his teammates. There’s still a lot he needs to learn and show to the world to prove that he’s worthy of a Championship winning car.

#4 Mercedes must learn from the past

The only run in the history of Formula One that is comparable to the run Mercedes is on is the success that Ferrari had from 2000-2004 where they were able to win titles at will. Even after suffering a hiccup of sorts in 2005, the Ferrari team was able to bounce back with Schumacher in 2006 when they almost won the title.

It was during this time that Ferrari started looking at the future and looking beyond Michael Schumacher. Michael Schumacher retired in 2006 because of politics involved and Ferrari despite winning the title in 2007 and coming close in 2008, has never been the same.

They’re yet to win a title in 2007 and most importantly they have not been able to replicate the DNA behind the super-team that won 5 consecutive titles for them. It’s always said, don’t fix what’s not broken and it holds true for Mercedes as well. They have a winning combination in place, why tinker with it and leave themselves exposed?
Mercedes have more or less dominated Formula One since 2014, and the winning team has had Lewis Hamilton and Toto Wolff at the core of it. Dropping Lewis Hamilton now at such a critical juncture should never have been an option for Mercedes and by the looks of it, they would be making the right call by keeping hold of Lewis Hamilton for now. 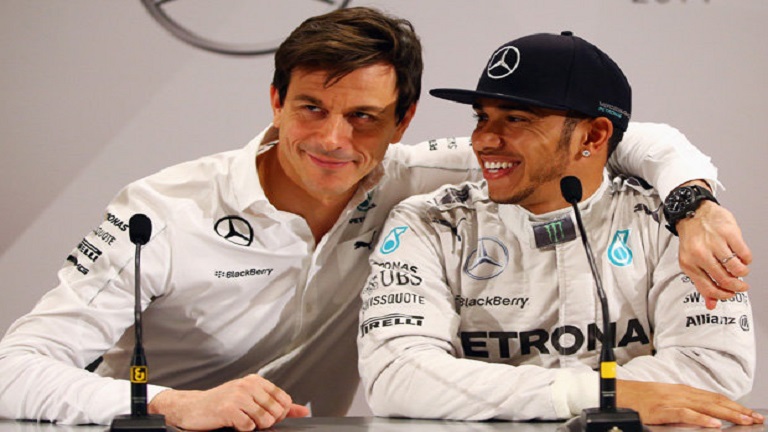