We are twenty games into an already unique NBA season, and the highlights continue to get bigger and better. In addition, voting for the 2021 NBA All-Star Game is in full swing, so don’t forget to vote for your favorite players in the NBA’s star-studded spectacle. Without further adieu, here are some highlights in this week’s NBA Roundup.

On Monday, The Brooklyn Nets rolled past the Miami Heat in a 98-85 victory that saw Kevin Durant make 20 points and 13 rebounds, followed by 20 points from James Harden, 16 points from Kyrie Irving, and 11 points from DeAndre Jordan. For the Heat, Bam Adebayo had 26 points and 10 rebounds, and Goran Dragic with 21 points. LeBron James and the Los Angeles Lakers trounced the Cleveland Cavaliers in 115 to 108 win. LeBron recorded 46 points, while Anthony Davis had 17 points and 10 rebounds. For the Cavs, Andre Drummond had 25 points and 17 rebounds, while Cedi Osman had 20 points. The Denver Nuggets dominated the Dallas Mavericks 117 to 113. Michael Porter Jr. had 30 points, while Nikola Jokic made 20 points and 10 rebounds. For the Mavs, Luka Doncic made another triple-double, having 35 points, 11 rebounds, and 16 assists. Tim Hardaway Jr. made 19 points. Two games were postponed on Monday which were the Sacramento Kings-Memphis Grizzlies game and the San Antonio Spurs-New Orleans Pelicans game.

Tuesday saw the Atlanta Hawks prevail over the Los Angeles Clippers in a 108-99 win. Trae Young led the way with 38 points, De’Andre Hunter with 22 points, Clint Capela with 13 points and 18 rebounds, John Collins with 11 points and 11 rebounds, and Kevin Huerter with 12 points. For the Clippers, Reggie Jackson had 20 points, Serge Ibaka with 15 points, Luke Kennard with 13 points, Ivica Zubac had 13 points and 10 rebounds, and Terance Mann with 10 points. The Houston Rockets won big against the Washington Wizards 107 to 88 which saw former teammates John Wall and Bradley Beal embrace each other after the game. Wall led the way for Houston with 24 points, Victor Oladipo and Eric Gordon had 20 points each, and DeMarcus Cousins with 19 points and 11 rebounds. For the Wizards, Beal had 33 points, Russell Westbrook with 19 points and 11 rebounds, and Robin Lopez with 10 points. The Utah Jazz defeated the New York Knicks 108 to 94, in which Royce O’Neale had 20 points, Mike Conley had 19 points, and Rudy Gobert had 18 points and 19 rebounds. For the Knicks, Austin Rivers had 25 points, RJ Barrett with 17 points, and Julius Randle with a double-double of 18 points and 10 rebounds.

Wednesday saw the Indiana Pacers winning over the Charlotte Hornets in a 116-106 contest. Domantas Sabonis made 22 points, 11 rebounds, and 10 assists, Doug McDermott with 28 points, Malcolm Brogdon had 25 points and Justin Holiday with 19 points for the Pacers. For the Hornets, Terry Rozier had 20 points, Devonte’ Graham and Gordon Hayward with 16 points each, PJ Washington made 18 points, Miles Bridges with 11 points, and Cody Zeller with 10 points and 14 rebounds. The Sacramento Kings crowned the Orlando Magic in a 121 to 107 victory. Richaun Holmes had 20 points and 12 rebounds, Marvin Bagley III with 16 points and 12 rebounds, DeAaron Fox had 16 points and 10 assists, and Buddy Hield with 29 points. For the Magic, Nikola Vucevic had 26 points and Evan Fournier with 25 points. Brooklyn won big in overtime over Atlanta in a 132 to 128 contest. Durant had 32 points, Harden with 31 points and 15 assists, and Kyrie Irving with 26 points for the Nets. For the Hawks, Cam Reddish had 24 points, John Collins and De’Andre Hunter had 21 points, Huerter made 11 points and Trae Young with 28 points and 14 assists. The Nuggets defeated Miami in a 109 to 82 blowout. Jokic had 21 points and 11 rebounds for the Nuggets, followed by JaMychal Green’s 15 points and 10 rebounds. For the Heat, Kendrick Nunn had 17 points, while Adebayo had 15 points and rookie Precious Achiuwa with 10 points. The Philadelphia 76ers won in a close game against the Lakers in a 107-106 contest. Joel Embiid had 28 points, Tobias Harris with 24 points, and Ben Simmons with 17 points, 11 rebounds, and 10 assists for the Sixers. LeBron had 34 points, Davis had 23 points and Dennis Schroder with 16 points. The only postponed game was the Chicago Bulls-Memphis Grizzlies contest.

On Thursday, The Rockets won over the Portland Trail Blazers in a 104-101 victory. Oladipo had 25 points, Wall had 20 points, and Christian Wood continues to improve with a 22 point-12 rebound performance. For the Blazers, Damian Lillard had 30 points, Gary Trent Jr. had 23 points, Anfernee Simons made 14 points, Derrick Jones Jr. with 11 points, and Enes Kanter with 13 points and 13 rebounds. The Clippers prevailed over the Heat in a 109-105 game that didn’t see Kawhi Leonard, Paul George, Jimmy Butler, or Goran Dragic play for their respective teams. For the Clippers, Nic Batum had 18 points, Lou Williams made 17 points, Reggie Jackson had 16 points, Terance Mann with 12 points, and Serge Ibaka with 10 points and 13 rebounds. For the Heat, Tyler Herro had 19 points and 10 rebounds, Gabe Vincent with 18 points,  Max Strus with 12 points, Achiuwa with 10 points, and Bam with 16 points and 13 rebounds. The Detroit Pistons shocked the Lakers in a 107 to 92 win that saw Blake Griffin lead the way with 23 points, Wayne Ellington registering 20 points, Derrick Rose and Jerami Grant with 14 points each, and Mason Plumlee with 17 points and 10 rebounds. The Phoenix Suns scorched the Golden State Warriors in a 114 to 93 game that saw Mikal Bridges make 20 points, Jae Crowder with 16 points, Chris Paul and Cameron Johnson with 13 points, DeAndre Ayton and Frank Kaminsky with 12 points and 13 rebounds apiece. For the Warriors, Stephen Curry had 27 points, Andrew Wiggins with 16 points, and Eric Paschall with 12 points.

Friday saw a doubleheader as the New Orleans Pelicans won over the Milwaukee Bucks. Brandon Ingram had 28 points, Lonzo Ball with 27 points, Eric Bledsoe with 25 points, Zion Williamson made 21 points, Jason Hart with 15 points, and Steven Adams with 4 points and 20 rebounds. For the Bucks, Giannis Antetokounmpo had 38 points and 11 rebounds, Jrue Holiday with 22 points, Khris Middleton and Brook Lopez with 16 points each, and Donte DiVincenzo with 10 points. In a high-scoring blowout, the Nets prevailed over the Oklahoma City Thunder in a 147 to 125 victory. Harden had 25 points, 10 rebounds, and 11 assists, Kyrie Irving had 25 points, Joe Harris with 20 points, Bruce Brown had 19 points, DeAndre Jordan with 10 points, Landry Shamet with 11 points, and Reggie Perry with 10 points and 11 rebounds. For the Thunder, Shai Gilgeous-Alexander and Theo Maledon had 24 points each, Hamadou Diallo made 18 points, Al Horford had 16 points, and Darius Bazley had 14 points.

Saturday saw the return of Jimmy Butler for the Heat as they won in a close game against the Kings. Butler returned in a big way with 30 points, followed by Herro with 15 points, Duncan Robinson with 14 points, and Bam with 18 points and 13 rebounds. For the Kings, Fox had 30 points, Hield with 18 points, Bagley with 17 points, Harrison Barnes with 11 points, and Tyrese Haliburton with 10 points. It was a must-see game as the classic rivalry between the Lakers and the Boston Celtics were renewed. The Lakers won 96 to 95 over the Celtics. LeBron had 21 points, Schroder with 12 points, and Davis with 27 points and 14 rebounds. For the Celtics, Jayson Tatum had 30 points, Jaylen Brown with 28 points, Daniel Theis with 14 points, and Robert Williams III had 10 points.

During this week of ongoing NBA action, the NBA lost a respected journalist in Sekou Smith to coronavirus complications. Smith was a beloved analyst who covered the game like no other and was admired by fellow journalists, analysts, and basketball players alike. Smith was 48. 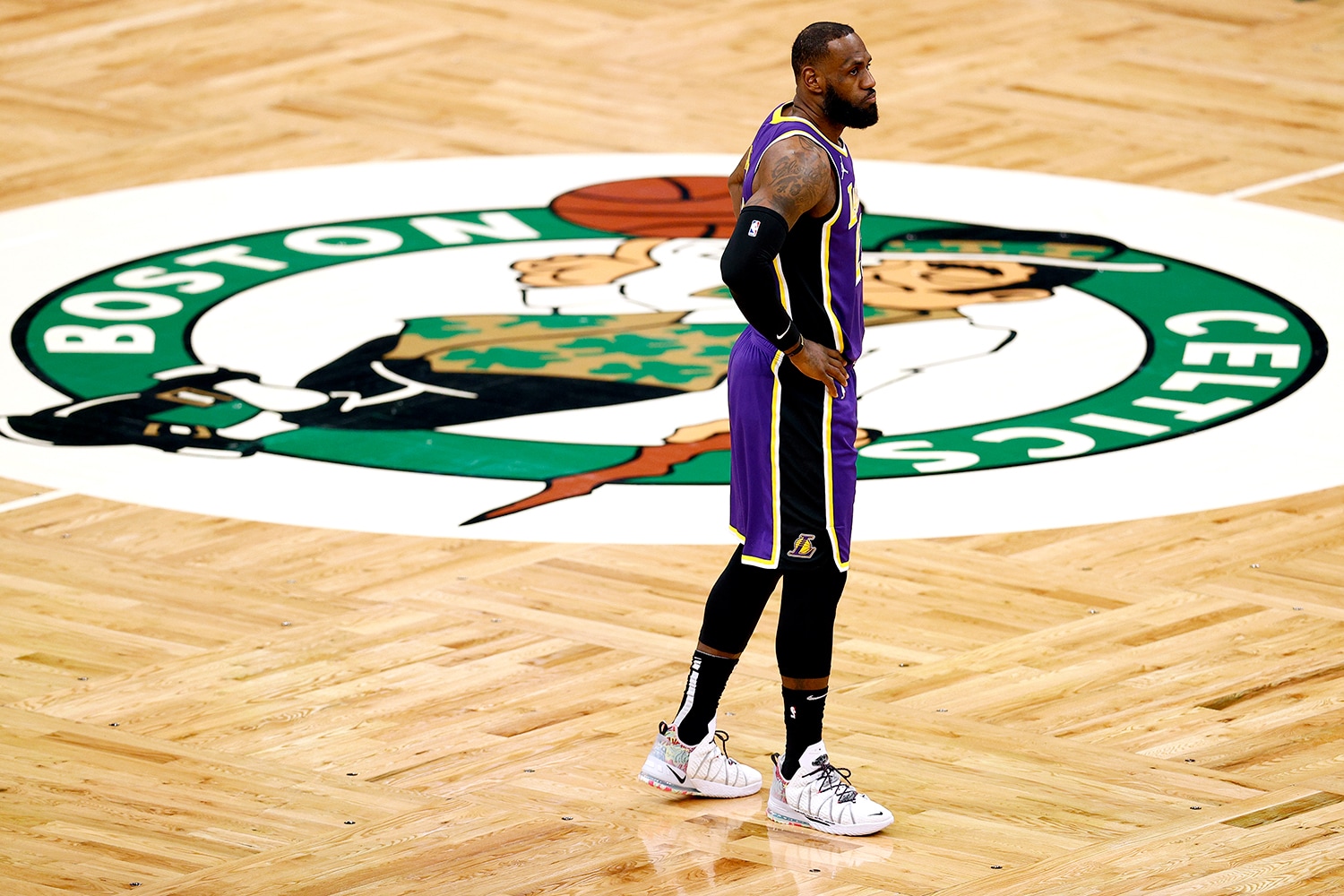