Hakim Ziyech or simply Ziyech is not a name that’s unfamiliar to the die-hard fans of football. A name that is being reverberated well across the Dutch league for years and quite handsomely on the greeneries of UCL lately.

Since then he has been picking up numbers quite quickly with astonishing pace and desire to achieve more. Goals and assists have been showing no signs of sleeping back since his arrival. An overall of 46 goals and a whopping 78 assists has been born from the show buzz since he has joined Ajax. Hence the silent tag; Assist King.

Apart from the individual list of numbers on the ground, awards and achievements have been showering on him too. The 2018/19 season has been his best until now. Won the Eredivisie and KNVB Cup in the same year made it into the UCL semi-finals and UCL team of the season for the same year and Dutch Footballer of the year/Golden boot all on the same season;2018/19. He also was also Ajax’s player of the season for 2 years (2017/18 & 2018/19). And much more is into his bag which extends from the top assister in  Eredivisie for 4 consecutive seasons and a decent stint for his national side etc.

But even though all these lists of worthy feathers have been pinned to his caps, there haven’t been big names knocking on Ajax’s door. No European giants weren’t paying that much attention or interest over this guy. Let aside’s Euro obsession over mouth-watering wingers. The least notable sense of wanting came from Bayern but turned out to be a late lazy glare.

Tottenham also seems interested lately. Mourinho’s arrival and his lack of notable potentials in the squad and his personal tradition of huge spending and restructuring may end up at the capital city of Netherlands looking for the emerging star. Ziyech would be a brilliant addition to the right flank replacing an already underperforming Lamela and also proving as a tight competition to the Brazilian winger Moura.

Despite being happy in his red and white stripes, extending a contract to 3 more years, more shirts may come in to capture the astounding talent in the coming transfer windows. So, let’s all patiently lay back and see whether Ziyech would stay or step his foot anywhere else in Europe. Till then enjoy him at Ajax! 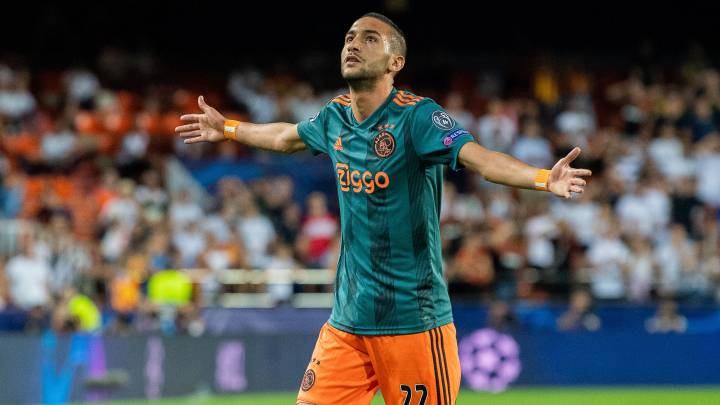