Few could have foreseen last season that by mid-November, Miguel Almiron would have a strong case to be in the Premier League team of the season thus far, yet the Paraguayan continues to entertain.

Having joined Newcastle for a then club-record fee of £21 million in January of 2019, the midfielder arrived from Atlanta United on the back of an impressive second season in the MLS, which saw double figures in both goals and assists. With Newcastle only a point above the relegation zone then, the pressure on Almiron to preserve the Mags’ Premier League status was immediate. He struggled for consistency; with only four goals in his first 46 games. Fast forward to November of 2022, the Paraguayan has 8 goals in the first 14 matches of the season, one less than in his entire Premier League tally before that and is a player transformed.

Perhaps it’s easiest to rewind to pre-season, where the first glimpses of what was to come were evident. Almiron ended Newcastle’s pre-season tour with 8G/A making him the standout performer of a successful tour of Austria and Portugal; which saw them beat Athletic Bilbao, among others. Over the summer, Miguel himself cited Howe’s:

as a driving force behind his excellent pre-season form and seemed buoyed by the manager’s confidence in him. As with all pre-season fixtures though, form must be taken with a pinch of salt, alas, Almiron would not have been the first player to perform well in pre-season and see it disappear come Game week 1. Yet here we are on the brink of the fifteenth round of Premier League fixtures and the Paraguayan is showing no sign of slowing down. Is Almiron beginning to fulfil the potential he showed in the MLS? The signs are positive….

The Importance of Positioning

For starters, Almiron and Newcastle have mutually benefitted from the consistency of Howe’s formation and structure. During the reign of both Benitez and the much-maligned Steve Bruce, neither opted for a constant formation that facilitated a typical number ten; the position that Almiron thrived in for Martino’s Atalanta side, which set the foundations for his move to Tyneside. In previous seasons Almiron struggled to settle anywhere across the front five and last season he only completed 19 of the 38 available ’90s for Newcastle, down from 19/20 (33.6) and 20/21 (27).

After sacking Bruce, appointing Howe and the emerging success of Joelinton in midfield towards the back end of last season, Eddie Howe opted to settle for a traditional 4-3-3 in 2021/22. Once again creating a problem for Almiron – a formation devoid of a CAM: his best position. Yet, Almiron is a player reborn this season, adapting to the team’s need for a right winger and starting all 14 Premier League games on the right side of a front three.

This adaptation in the role has liberated Almiron and allowed him more freedom to go inside or outside his defender. So far this season, his ability to cut inside and utilise his stronger left foot, has contributed to the player’s fine goal-scoring form. Particularly sumptuous strikes against Everton and Aston Villa in which Almiron came in off the right and curled strikes with his left foot were reminiscent of a certain Arjen Robben – high praise indeed and perhaps getting carried away. His growing ability to drive at defenders and cause problems for left-backs was no more evident than in his magnificent solo effort against Tottenham in which he ran at and stood up, Clement Lenglet, before driving to the by-line, opening his body up and calmly slotting it under Hugo Lloris. The directness and composure exhibited at the Tottenham Hotspur Stadium underlined the confidence the 28-year-old is playing with.

Stability is key for any successful side.

As the club endured a tumultuous and uncertain end to the reign of Mike Ashley, Howe’s stability has brought consistent starts for Almiron and Howe’s faith in the Paraguayan continues to pay dividends. His MOTM display at Fulham provided the standout moment of his season so far. His audacious volley, which left Bernd Leno helpless, displayed immaculate technique and demonstrated to the Newcastle faithful, just how much quality he possesses. He capped it with a clever run and calm finish at the back post for his second, highlighting his ability to read the game and desire to score more goals this season.

Hunger and desire are two words the Newcastle faithful rightly accused Mike Ashley of lacking, Almiron has both in abundance:

It isn’t just his offensive output that has cemented the Paraguayan as a fan’s favourite among the Toon faithful this season. Since arriving at Newcastle, Almiron has been praised for his selfless work off the ball and his willingness to go about his defensive work. Almiron’s seemingly endless pressing saw him rob Ethan Pinnock in the 82ndminute against Brentford, before rounding Raya to put the game to bed. His hard work and modesty are well received in a city that appreciates these values above others. Wor Miggy indeed.

In fact, among forwards in the PL this season, Almiron has completed 21 successful tackles, a stat bettered only by Everton’s Anthony Gordon. The forward consistently ranks in the 90th percentile among fellow forwards in Europe across tackling and pressures. The defensive work rate and attacking output are a manager’s dream and Howe will certainly appreciate the effort that Almiron provides at both ends of the pitch.

Stats are useful for quantifying a player’s form and easily emphasise Almiron’s great start to the season but anyone watching Newcastle at the moment will agree it’s clear to see Almiron is a man transformed. Seemingly settled and undoubtedly thriving, much like many of his teammates; Newcastle are up to third and in full flow in the Premier League. The mood is bright on Tyneside and Howe’s faith in the Paraguayan is certainly paying off. Almiron will look to continue his red-hot start to the season when visitors Chelsea take to St James’ Park this Saturday, would you bet against him to add to his tally? I certainly wouldn’t. 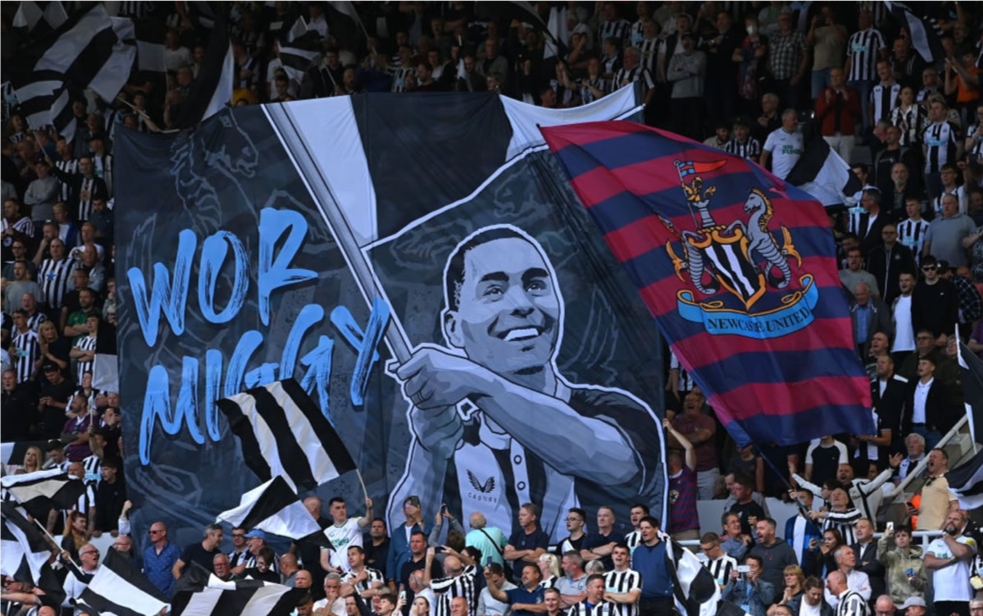