Luton Town head coach Nathan Jones has become Southampton’s new manager after the sacking of Ralph Hasenhüttl on Monday. But considering his inexperience in the Premier League, and given what happened last time he jumped ship to another club, can he be the right man to lead Southampton out of relegation and lead them into a new era?

The start of Jones’ Career at Luton

After taking interim charge at Brighton and Hove Albion for just two games, which included a 2-0 win against Fulham and a 2-2 draw against Reading, Jones’ first actual stint as a full-time manager came during the 2015/16 season at Luton Town, where he picked up 36 points and guided the then League Two Hatters away from danger and into mid-table.

In the following 16/17 season, Jones’ got the ball rolling and skyrocketed the Hatters up the table, winning 20, drawing 17 and losing 9 games as his side finished 4th in the League Two table, earning a place in the play-off semi-finals. Playing a brand of football which was brave and attack-minded, despite the abundance of draws.

During the play-off semi-finals, Luton played Blackpool, and despite losing the first leg 3-2 at Bloomfield Road, Jones’ men managed to turn the game around and lead the tie 5-4 on aggregate, before eventually losing 5-6 at fulltime. A crazy end to what was an unbelievable play-off semi-final, and although Luton had lost, Jones’ approach to the game would pay dividends in the next season.

In the 17/18, Jones’ men cranked up the gears as they started the season’s opening day with a thumping 8-2 win against Yeovil Town. From there, the Hatters never looked back as they won 25, drew 13 and only lost 8 games to finish 2nd in the league and earn automatic promotion into League One.

During the first half of their first season back in League One, they played with the same bold approach in the season’s gone by and weren’t afraid to take on anyone regardless of who they were or where they are in the league. This led to them being in 3rd place by the time 2019 rolled around, by which time Stoke City came calling; feeling as though he wanted a new challenge, Jones joined the Potter on the 9th of January. But the move proved to be a bad one.

Jones’ time with the Potters

When Jones became the Stoke manager, it was hoped that he could bring the energy and intensity that he had at Luton to the Bet365 stadium. But during the second half of the 18/19 season, he only picked up 3 wins in 20 league games as he tried to implement his style of football to a tea with a high turnover of players and still somewhat hungover from their Premier League relegation the previous season.

Throughout his time at Luton, Jones used a variety of formations with a diamond element, such as 4-4-2 diamond, 4-3-1-2 and 4-2-3-1, all of which the players could adapt to, and diamond variation was his go-to formation. However, it never seemed to click for him at Stoke during that season, and the Potters went on to finish 16th that campaign.

The following season was much worse, though, and Jones only got his first win of the season in October when his side beat Swansea City 2-1 at the Liberty stadium. He then won his next game 2-0 against Fulham, but with the club sitting towards the bottom end of the table, the Stoke board had enough and sacked him as manager after a 2-0 away defeat to Millwall.

His old club, Luton, managed to earn promotion to the Championship at the end of last season, but unlike their start to life in League One, they found the Championship a much more complicated affair. With the club in the mists of a relegation dogfight, Graeme Jones was sacked as the Luton manager, and although Nathan left on somewhat shaky terms, he was reappointed as the team’s manager to help guide them out of danger.

A second Chance at Luton

When the football season resumed in June 2020 after it had been paused due to the Covid-19 outbreak, Jones quickly got to work and managed to pick up 16 points in their remaining 9 games to keep Luton in the Championship, including a dramatic 3-2 win over Blackburn Rovers on the final day of the season.

Once the club’s survival was secured, he could now focus on stabilising the team, and with players such as Kiernan Dewsbury-Hall, a long signing from Leicester, Elijah Adebayo and Tom Lockyer, just to name a few, they did just that by finishing in a modest 12th place in the table. Still playing the brand of football which earned him a lot of plaudits during his first spell in charge.

It’s clear that Jones was making progress with the club, but I doubt any Luton fan saw the next season coming as they would take on the division and push themselves all the way up the table. Showing no fear, they would be top of the table for brief periods of the season and had the fans dreaming big of the Premier League, before eventually finishing in 6th place and earning a spot in the play-off semi-finals.

Their play-off opponents would be Huddersfield Town, who finished 3rd last season. With the first leg taking place at Kenilworth Road, it was a fairly even contest. Despite going 1-0 relatively early, Jones’ men got on level terms and could’ve potentially won the leg with the chances they created. But alas, it ended 1-1, and despite a valiant effort in the second leg, Huddersfield just about edged them and won the leg 1-0, beating Luton 2-1 on aggregate.

Although his side lost the semi-finals, there were plenty of positives to take from last season, and Jones’ approach to football was indeed enjoyable to watch. This season, despite a poor start, the Hatters currently find themselves 9th in the Championship, with another attempt at promotion glory on the cards yet again. But with Hasenhüttl’s departure from Southampton on Monday, the Saints have identified Jones as a good candidate for the job, and with the glitz and glamour of the Premier League, it was an offer which he couldn’t refuse, becoming the new Southampton manager.

A new chapter for both parties

So, now that Jones has been appointed as the new Southampton boss, what can expect to see from him in the Premier League? Well, much of the same from him, to be honest. His demands of high intensity and energy are well known, and there’s no doubt he’ll try to bring the same methods of football he had at Luton to St. Mary’s.

However, effort is one thing, and it’s more of the lack of quality up top which has hampered the Saints in recent times. In the summer, there were 5 critical areas which Hasenhüttl needed to address this season if the south coast side wanted to avoid a terrible season. These included a prolific goalscorer, keeping hold of James Ward-Prowse and improving the defence, among others.

The cub managed to keep hold of Ward-Prowse, so that’s not an issue for Jones. In regard to the lack of a prolific goalscorer, Elija Adebayo was Luton’s top scorer last season with 16 goals as the club managed to become the sixth most prolific side with 63 goals, with many of their other goals coming from different players in the team.

I believe this is something he could implement in Southampton, not having to rely so heavily on Che Adams and Adam Armstrong for the goals, but instead getting other attacking players such as Stuart Armstrong, Joe Aribo, Mohamed Elyounoussi, Moussa Djenepo etc., to pitch in and help support the strikers a lot more.

When it comes to the defence, Luton boasted the joint third most clean sheets in the division alongside Huddersfield and West Bromwich Albion. Getting the defence to work as a unit and become more steel-like, something else which Jones will doubt bring to the Southampton backline considering their tendency to ship a large number of goals, including two 9-0 defeats in the last three years.

Since the beginning of last season, Jones has moved away from his traditional diamond formation and moved to a back three, providing more defensive stability and as well as more of than attacking threat. Whether it be a 3-5-2 or a 3-4-1-2, the Saints players should be more capable of adapting to these formations, and if they hit the ground running after the World Cup break, they have every ability to pull themselves away from danger.

So, after all of that, is Nathan Jones the right man for Southampton? Potentially, yes. Although it’s no doubt a bit of risk for both club and for himself, since the last time he jumped ship, it didn’t end too well. It remains to be seen whether Jones has learned from his Stoke experiences, and take Southampton out of relegation troubles and into a new era of stability and progress. 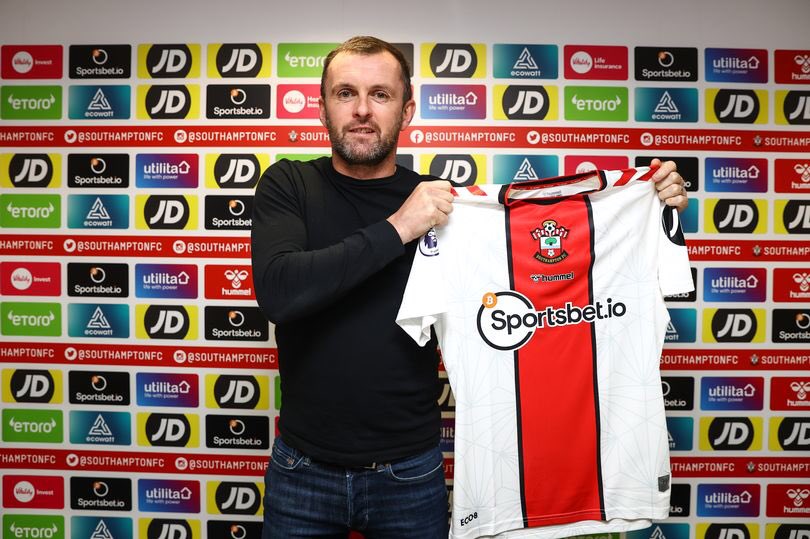