With the World Cup well and truly underway and an exhilarating set of matches in the first round, we take a look back into every group stage game of the first round.

Qatar became the first hosting country to ever lose its opening game in a World cup, being completely outclassed by an Ecuador side that looked like they could have had more if they wanted to. Ecuador controlled the majority of the game and bar a few long-range efforts, Qatar never threatened the Ecuadorian goal.

Enner Valencia thought he had opened the scoring in the third minute before being ruled out by VAR for offside, however, Valencia did go on to score both goals, crowning him the man of the match.

A poor display by the hosts of the tournament leaves us no further in our inquest into what standard Ecuador are at and will likely be found out in their next fixtures.

In a close encounter between two sides desperate for the three points, Netherlands edged the contest, scoring two late goals to secure the victory.

Both sides lacked their key men in this fixture with Senegal’s Sadio Mane and Netherlands Memphis Depay both being unavailable to start this game.

The Senegalese resistance was strong, however, a lack of cutting-edge up top cost them in this game, as they failed to capitalise on a sloppy performance by the Dutch.

England manager Gareth Southgate decided to switch to a four at the back against Iran and to the surprise of many fans, England put on a World Cup performance for the ages.

Iran looked timid in this game and offered very little across the game, allowing England to play at their tempo and pick them off with ease. However, England’s performance was not all down to Iran’s poor performance, as the attacking fluidity that the English were playing with being something to behold at times.

Iran however did hit back late on in the game, with Taremi clawing back two for his nation. A soft penalty and a scintillating finish showed signs of defensive errors for England that will need to be brushed up as the tournament progresses.

In a game that defined a game of two halves, the USA had Wales on the ropes for large portions of the first half. Wales struggled for any possession and were deservedly trailing 1-0 at the break, after sitting too deep and allowing the USA to build in their half.

However, at halftime, Welsh manager, Robert Page brought on Keither Moore for Daniel James which changed the game completely. The centre-forwards presence up top and the clear instruction for the Welsh side to push up the pitch paid dividends for them.

The Welsh battered the USA in the second half earning a well-deserved penalty, in which Gareth Bale stepped up and finished with class. After relentless efforts, both sides finished with a point a piece, a point which both can use to build off.

Argentina came into this game as one of the favourites to win the tournament and as Lionel Messi dispatched a spot kick in the 10th minute, many thought normal service had begun.

Saudi Arabia set up bravely with a very high defensive line, limiting the spaces that Messi could operate in, attempting to minimise his creative threat. A risk that was nearly punished on multiple occasions in the first half, as Argentina kept getting caught offside when trying to exploit the high line.

Then at the start of the second half, Saleh Al-Shehri and Salem Al-Dawsari made history, scoring inch-perfect strikes to send Saudi Arabia into the lead. A lead that was battled bravely until the final whistle, earning the nation a deserved three points in the group and a national holiday for all to celebrate.

The tournament’s second goalless draw came to fruition, in a match between two sides that lacked the quality to invent chances.

The key moment of this game was a shock penalty miss from Poland’s star man, Robert Lewandowski, as Guilhermo Ochoa saved a poor penalty from the Polish striker.

A point a piece for both sides seemed a fair assessment of the match, even after Lewandowski’s miss from the spot, with both sets of supporters expecting much more if they are to qualify through the group stages.

The World Cup’s first goalless draw was held in this fixture and although a goalless affair, the game did not lack in entertainment value.

Tunisia started much brighter of the two sides, pressing and turning over possession, surprising Denmark. A struggle to hold any meaningful possession and the conceding of chances in the first half had many believing that the Tunisians were due a goal for their efforts.

If not for goalkeeper Kasper Schmeichel, Tunisia would have had their goal, as the Danish goalkeeper made a stunning save to deny Issam Jebali from sending the Tunisians in front. Although expecting all three points prior to kick-off, they earned themselves a point that all things considered, they will most likely take.

Australia enjoyed a successful opening 15 minutes against the defending world champions, giving the French issues and even taking the lead in the ninth minute through Craig Goodwin.

However, after the goal the Australians began to not retain possession as well, allowing France to get into wide areas and exploit their narrow formation.

Ousmane Dembele and Kylian Mbappe’s width, pace and trickery out wide gave the Socceroos fullbacks nightmares, gliding past them at ease. However, the star of the show was Olivier Giroud, scoring two goals to equal Thierry Henry’s record for France.

The Germans were looking bright in the first half of this game, going one goal up through a calmly dispatched penalty by Ilkay Gundogan with Kai Havertz being denied a second by VAR due to offside breaches.

The second half also began promisingly for the Germans, as they were creating opportunities hinting at a second goal. But the second goal of the match went against the run of play, as substitute Ritsu Doan equalised in the 75th minute.

Takuma Asano then scored only eight minutes later, sending Japan into the lead, leaving the Germans shellshocked. A win against the run of play for Japan now leaves Germany in a precarious position, flirting with a group-stage exit from the World Cup.

To further rub salt in the German wound, Spain took to task on a poor Costa Rica side, dominating from start to end.

The Spanish admittedly faced little resistance, as Costa Rica only held a total of 18% possession without even registering a shot on target.

However, regardless of the opposition, the Spanish passing rhythm and sequences were superb and with goals being shared around the entire squad, confidence will be high heading into the rest of the tournament.

A lack of quality was on display in attacking areas in this match, as both sides seemingly cancelled each other out with only a total of two shots on target for both sides.

Croatia had the better chances of the two sides in the first half, with Ivan Perisic and Luka Modric placing their shots above the bar and Nikola Vlasic forcing a save out of Moroccan goalkeeper, Yassine Bounou.

Croatian goalkeeper, Dominik Livakovic was forced to make some saves of his own, however, as Morocco’s main man Achrif Hakimi’s long-range effort and Bayern Munich fullback, Noussair Mazraoui’s diving header were both saved.

Despite a victory in their opening game, Belgium’s performance against Canada was not one to inspire the nation for the rest of the World Cup campaign.

The Canadians started brightly and continued to dominate a disjointed Belgium side that struggled to hold possession. Canada was much the better side in this outing but were not prolific when given the chances, with Alphonso Davies missing a spot kick and Jonathan David missing key chances.

Michy Batshuayi however, was prolific, thumping home a ball over the top in convincing fashion, saving his team from a poor start to the group stages.

ALSO READ:  The 3 critical areas which Julen Lopetegui must address at Wolverhampton Wanderers

In a contest that had its chances for both sides, Switzerland edged a Cameroon side that lacked the ability to capitalise off their opportunities in the final third.

Switzerland’s creative outlet in Xherdan Shaqiri put the ball on a plate for Breel Embolo who scored the only goal of the game, refusing to celebrate against the nation he was born in.

Overall Switzerland was the better of the two sides and were the more deserving of the vital three points that they acquired.

Serbia set up in this fixture as a resolute and compact side that was not allowing Brazil to play with their usual freedom and creativity.

Despite holding many people’s favourites for the competition to a scoreless draw at halftime, Serbia’s compact shape was broken as Richarlison pounced on a parried save in the box to tap in the opening goal of the game. Richarlison then popped up again with a sensational piece of improvised finishing, as he acrobatically struck Brazil’s second home after a deft touch.

While Brazil may not have won the game in the devastating fashion that many may have expected they would, they showed impressive control over the game that will leave teams throughout the tournament hoping to avoid them as long as possible.

A fixture that defenders around the globe would have admired, both sides did most of their impressive play inside their own defensive areas.

There were few chances in this game, as a total of one shot on target between both sides over the entire match encapsulated what was a relatively lacklustre attacking display from both sides.

A late flurry of chances occurred for both sides as Federico Valverde and Heung Min Son both were unable to capitalise on the opportunities that arose.

In a game where Portugal needed to capitalise on the dropped points by Uruguay and South Korea, they took the game to Ghana, however, came into the half-time break with the score all square.

But after a controversial penalty was given against the Ghanaians, Cristiano Ronaldo stepped up to tuck home the spot kick. The Ghanaians did not lack a fighting spirit as they equalised shortly after.

A quickfire double from Joao Felix and Rafael Leao seemingly put the game out of reach, but again the Ghanaians did not lie down, equalising late and agonisingly missing a chance presented at the final moment of the game. A game where Portugal showed their quality in attacking areas, but their leaky defence will need to be sorted as the tournament progresses. 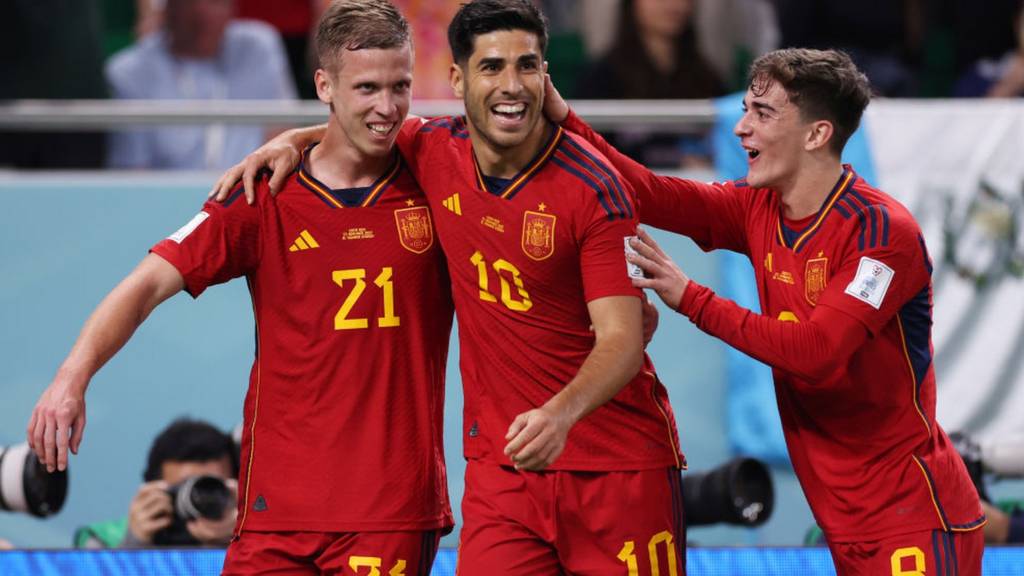