Bayern Munich have completed the elusive ten in a row of Bundesliga titles, becoming the first side from a top five league (Premier League, Serie A, Ligue 1, La Liga and Bundesliga) to do so.

The Bavarian giants have done this despite a very mixed season in which they were knocked out of the DFB Pokal by Borussia Monchengladbach (5-0) in the second round and were shocked by Villarreal in the Champions League Quarter-Finals.

They did this by beating the last side to win the Bundesliga title, Borussia Dortmund (3-1) with goals from Serge Gnabry, Robert Lewandowski and Jamal Musiala.

Throughout this period of 10 years, the Bavarians have had to rebuild their side through transfers to replace talent seamlessly in order to continue this impressive streak.

Furthermore they have had seven permanent managers in this side with all of them winning at least one Bundesliga in their time at the club, including the latest manager to win the Bundesliga, Julian Nagelsman.

With this in mind, this article will present the best XI of this remarkable run of Bayern Munich in the last ten seasons (this was a very difficult choice).

This was the most difficult choice of the team, as each manager (barring Niko Kovac) has been very successful at Bayern Munich, with Hansi Flick (2020) and Jupp Heynckes (2013) winning the treble.

Despite this, Pep won three consecutive titles in an era where he had to beat Jurgen Klopp’s very competitive Borussia Dortmund side, for the 2013/2014 season and a Dortmund side who finished 10 point behind them in 2015/2016.

For the longevity of his success and his nurturing of talent like Leon Goretzka and Joshua Kimmich. His signings of Kingsley Coman and Douglas Costa were critical in replacing the old guard of Franck Ribery and Arjen Robben.

Best Season: 2013/2014 season – Pep won the title with Bayern Munich in record time, on the 25th March, what was more impressive was that it was his debut season in Germany.

He has kept 214 clean sheets in his Bundesliga career, which makes the record clean sheet keeper in Bundesliga history, ahead of German and Bayern legend Oliver Kahn (205).

His ability to sweep and play the ball with his feet and his shot-saving ability has seen him become a Goalkeeping revolutionary, inspiring the likes of Ederson and Alisson Becker, as the next generation of Goalkeepers.

Neuer became the fifth goalkeeper to finish in the Balon D’or top three (after Lev Yashin, Dino Zoff, Oliver Kahn and Gianluigi Buffon) but more impressively the first keeper to finish third during the Messi-Ronaldo duopoly (2007-2019).

One of the greatest full-backs of all-time, the German full-back played 332 games for Bayern Munich and has 113 German caps, winning the World Cup in 2014.

The definition of loyalty, the German was a one-man club player, only playing for Stuttgart on loan between 2003-2005, he was made captain in 2011 and as such was Captain for each of the first five title winners for the German giants in this unbelievable run.

A fantastic leader who inspired passion and greatness from his team, his retirement in 2017 left a huge gap in the Bayern side, fortunately they had a young Joshua Kimmich to replace the legend.

Lahm became the 17th Bayern Munich hall of famer, the first since Oliver Kahn in 2008, after 22 great years of service to Bayern Munich.

Best Season: 2012/2013 – The full-back played exceptionally well in the Treble Season, providing 11 assists in the Bundesliga, as Bayern Munich won the League by 25 Points.

A consistent member of this side, who signed from Manchester City in 2011 for 13.5 Million Euros on a 4 Year deal, he left last season after 10 years of service for the club, for Lyon.

Jerome was injury-prone throughout his time at Bayern, but he was also one of the best centre-backs in the world in the early to mid 2010s, winning the German player of the year in 2016.

Boateng’s rise from a Manchester City reserve to Bayern Munich legend, nine time Bundesliga winner and two times Champions league winner is one of those underdog stories in Football, he became a World Cup winner in 2014 as well and will retire as one of Bayern’s legends.

Best Season: 2015/2016: Was part of the successful Bundesliga winning side in 2015/2016 season and as a result of his success was voted as German Footballer of the Year.

Another player signed from a German rival and one that was key to the success of the Bavarians. He was part of the side that last stopped Bayern Munich, Jurgen Klopp’s Borussia Dortmund (2010/2011 – 2011/2012).

One that followed the footsteps of Robert Lewandowski, and signed in 2016 winning three Bundesliga titles in his time with the Bavarian giants.

He then resigned for Dortmund in July 2019, and was on the losing side as he saw his former club confirm their 10th consecutive Bundesliga.

He played 74 Bundesliga games in his time at the Champions. Mats Hummels may have not had the most time spent at Bayern Munich out of their centre-backs but his importance of weakening their main rivals, Dortmund, and his leadership qualities were key to Bayern’s success.

Alaba was a main stay in the Bavarian side for a decade before leaving on a free transfer to Real Madrid in the Summer, he was always seen as one of the best left-backs in the world during his time at the club. The competition between Marcelo, Jordi Alba and himself was the set-up for the new generation of attacking full-backs we see today with Andrew Robertson and Trent Alexander-Arnold.

Best Season: 2016/2017 – The full-back struggled with injuries but played 32 out of 34 in this season, contributing 8 goals (4 goals and 4 assists), as Bayern Munich won the league by 15 points ahead of RB Leipzig.

The legendary German and Bayern midfielder who joined Bayern’s first team in 2002 and left for Manchester United in 2015.

In his 13 years with the club, he won 8 Bundesligas, 7 DFB Pokals, 1 Champions League and 1 Club World Cup.

Schweinsteiger played 342 times for the German giants and scored 45 goals and got 47 assists.

He was inducted in the FC Bayern hall of fame in 2018, becoming its 18th member. His careers was littered with truimph but also determination through injuries and the German midfielder will be known at the Allianz for his great leadership and courage during his time there.

Best Season: 2012/2013: Out of all of the German players in the Bayern side (Manuel Neuer, Thomas Muller, Toni Kroos, Phillip Lahm, Mario Gomez and Jerome Boateng) he won the German player of the year in 2013, capping off an excellent treble season. He scored 7 goals and got 5 assists in 28 Bundesliga matches as Bayern became the first German side to win the Treble (League, Cup, Champions League) and only the third side in the 21st Century (after Barcelona 2008/2009 and Inter Milan in 2009/2010)

The toughest position to fill with Bayern having many world class midfielders in the last 10 years.

Players such as Xabi Alonso, Toni Kroos, Arturo Vidal, Leon Goretzka and Joshua Kimmich would likely make it into any other team’s team of the decade. With Vidal (Juventus) and Kroos (Real Madrid) making it for other teams.

The reason I chose Thiago is his longevity at the club and his brilliance in this side.

His ability to roam around the pitch and set the tempo was very important for a number of Bayern sides and within his seven seasons he played 150 times for Bayern in all competitions, this is despite him being injured for a year 2014-2015.

Thiago is a player who is not easily defined through basic stats, in fact he did not get an assist in the Bundesliga in the 2019/2020 season, but as he has shown throughout his career, the ability he possess to progress his side up the pitch and create chances for his side is very significant.

Thiago left Bayern to join Liverpool, after seven successful seasons at the club, despite a poor start, he has turned his form around and is now one of the first names on Jurgen Klopp’s teamsheet.

Best Season: 2016/2017 – Thiago played his best football in this season, being able to provide six goals and five assists in 27 Bundesliga matches, contributing 11 goals for the season. This helped lead Bayern to the title, 15 points ahead of RB Leipzig.

Known in Germany as the Raumdeuter (space interpreter), a player who uses space in order to create the best chances for those around him.

Muller has been a part of all of Bayern’s decade of dominance, scoring 104 goals and getting 150 assists, including 20+ assists in his last three seasons, as the German midfielder has moved from a goal-scorer to a goal provider.

Thomas Muller will go down as a Bayern Munich legend and despite rumours linking to a move away from the Allianz arena, to Manchester United in 2016, he has remained a one club man.

He has been rewarded for his loyalty with 12 Bundesliga titles and two Champions League trophies.

Muller has been able to adapt his game from being an all-out striker to an attacking midfielder capable of making penetrative passes and using the space to create chances for his team.

The flying Dutchman, who was an excellent servant to the Bavarian giants. This spot would be challenged by Serge Gnabry recent excellence but the continued form and goal-scoring ability of Robben sees him takes this spot.

He became famous for his cut in on his left foot on the right side and put the ball into the top left corner.

The Dutchman was an excellent servant who scored the winning goal in the 2012/2013 Champions league final at Wembley against Borussia Dortmund, taking revenge for his penalty miss the season earlier against Chelsea.

The best free signing of all time, the Polish striker swapped sides of Der Klassiker in 2014, after running down his contract and following in the footsteps of one Mario Götze.

Lewandowski, who almost signed for Blackburn in 2010, has 236 Bundesliga Goals in just 250 Bundesliga matches and has won the past four golden boots (set to win a fifth in a row this season) and has only failed to win the Golden Boot in two of his Bayern Munich seasons.

In this time he has won the 2021 FIFA Men’s best player and was arguably the favourite for the controversially cancelled 2020 Balon D’or and finished second to Lionel Messi in 2021.

The other half of the ‘Robbery’ duo that led Bayern to much of their early success in this decade, the French winger signed from Marseille in 2007. Ribery played 273 games for Bayern and scored 86 goals.

Franck Ribery left Bayern after 12 years to join Fiorentina in Serie A, he is another one in the team who does not play for Bayern Munich but has not yet retired, Ribery then joined Salernitana in 2021.

Ribery and Robben will no doubt join the FC Bayern hall of fame alongside Phillip Lahm and Bastian Schweinsteiger. 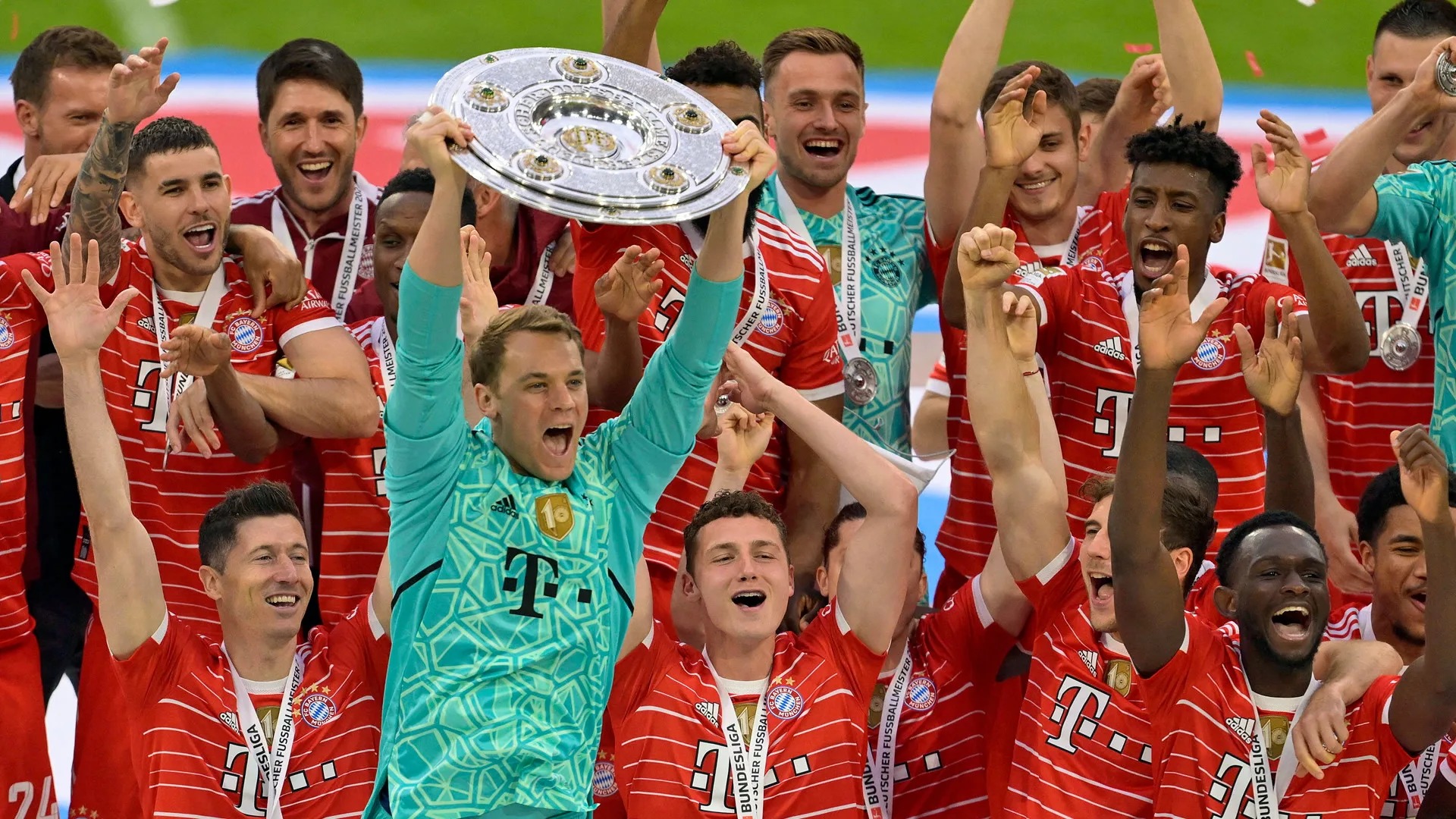