Austin Dillon was one of eight drivers who stayed on the track when the strongest drivers on the night,Kyle Busch and third-place Martin Truex Jr. came to pit road on Lap 368 of 400.Saving fuel for the entire run, Dillon followed closely behind Jimmie Johnson, who also stayed out, until Johnson ran out of gas with less than three laps left. With Busch and Truex very close behind, Dillon had just enough fuel to get to the finish line.This victory was very special for the Childress camp,as the very iconic number 3,returned to Victory Lane for the first time since the late Dale Earnhardt won his last race on Oct. 15, 2000 at Talladega.

“It hasn’t sunk in yet,” Dillon said in Victory Lane. “I can’t believe it. I was just really focused on those last laps. My fiancée wrote in the car, ‘When you keep God in first place, he will take you places you never imagined.’

“And I never imagined I be here at the 600 Victory Lane. Praise the Lord and all these guys who work so hard; and my pit crew is the best on pit road. I love it for them. We’re in the playoffs. It’s awesome.”

Larson got as high as third spot during the race before running into the wall with 153 laps left and needing three trips to the pits to fix the problems,and eventually falling to 23rd. Larson’s chances ended for good when he battered the wall again 45 laps later, Larson went to the garage and did not return. He was 33rd, his worst finish of the season.

Martin Truex Jr. probably deserved this win to be fair,leading a race high 233 laps,which he’s done three years running at the Coke 600.Truex took over the series lead by five points over Larson, with Keselowski 82 points back in third-place 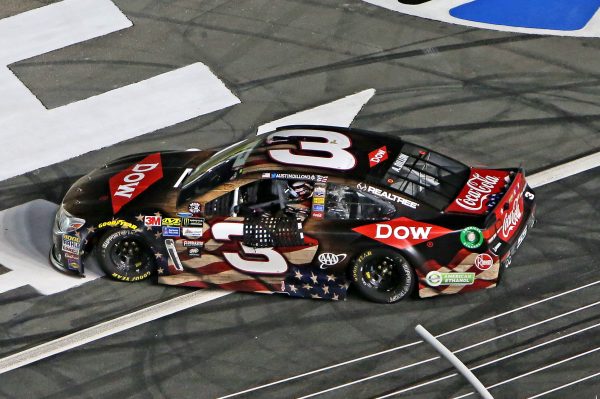