Enrique, as a coach won nine out of a possible 13 titles for Barcelona and left the club with one final hurrah, winning the Spanish Cup for a third time.

This article reminisces five of the most memorable games Barcelona played under Enrique’s tutelage.

Luis Enrique coached FC Barcelona for three seasons in 181 games within 2014-2017. The following list hand-pick only five of those many memorable matches, based on the performance of the team, the quality of the match, the impact of the match on Barcelona’s season and the importance of the match itself.

This was the match that actually turned everything for Luis Enrique as a coach. Prior to this match, nothing was going right for Barcelona. Sure they topped their group at Champions League but had lost to PSG in the away leg and were trailing Real Madrid in the La Liga standings. Enrique benched a handful of his starting XI players, including Messi and Neymar and paid the price for such a gamble. A Jordi Alba own goal ultimately led to Barca’s defeat at Anoeta.

The Barcelona press erupted after the loss and signs of cracks seemed to have appeared in the relationship between Enrique and his talisman, Messi. But the defeat seemed to light a fire in Enrique’s mind as the team never looked back again and ended the season by winning the treble. Hence, this defeat served a very important role in Enrique’s coaching career in Barcelona and led him to finding the perfect starting XI combination for his squad.

This was Barca’s last game under Enrique and after a frustrating season by the team’s superior standards, they needed a win to clinch the trophy for giving the perfect goodbye to their boss. Leo Messi and co. delivered and won the final 3-1, ensuring Enrique’s ninth title as a coach. It was the perfect send-off to Lucho and the players paid a spectacular tribute to their manager. Following the victory, Enrique remarked that he left as a happy man winning everything and not having any regrets; something quite rare for a manager in Europe’s top-level.

The result of this game did not have far-reaching impact ultimately but the very nature of the match and its finish makes it appear in this list. Barcelona were trailing Madrid yet again in La Liga standings and had just been eliminated by Juventus from UCL. Moreover, the team was not performing up to their mark in the season. As the league was slipping away from their grip, Barca traveled to Madrid and Enrique prepared to face Real for the last time as a Barca manager.

Pundits predicted a loss for Barcelona and a 10-men Madrid were almost getting away with a draw. However, everything changed in the final minute as Leo Messi scored for Barcelona and gifted Enrique a win in his last El Clasico, something his predecessors Martino, Vilanova and Guardiola failed to achieve. Barcelona failed to win the league but their dramatic win and Messi’s performance itself are sufficient for this match to be one of the most memorable ones under Lucho.

This match, almost at the business end of Enrique’s 1st season proved that his side had the ability to be Europe’s elite team. Barcelona had already eliminated the English champions, Manchester City and the French champions, PSG from UCL. But their acid test was against Pep Guardiola’s Bayern Munich in the semifinal.

Guardiola returned to Camp Nou to face the team that he once took to newer heights in Europe. But a 3-0 thrashing, which included a pair of goals and a superb assist from Messi sealed the fact that Barcelona had moved on from the Guardiola era and were quite enjoying the Enrique era. A short burst of magical performance from Messi was enough to end Guardiola’s hopes of leading Bayern to a Champions League final.

Barcelona won their second treble in the previous season but under Enrique, had failed to dominate their arch rivals, Real Madrid. However, that would change in the first El Clasico of his second season as a coach. Barca traveled to Madrid without their superstar, Leo Messi in the starting XI. That paved the way for young Sergi Roberto to shine in the spotlight of El Clasico as he provided a wonderful assist to Suarez to open the goal scoring.

ALSO READ:  What does success look like for Tottenham?
Barcelona annihilate Real Madrid at Bernabeu

Goals kept piling up one after another and the Balugrana simply destroyed their arch rivals by 4-0. When they were 3-0 up, Enrique decided to exert more pressure on Madrid’s defense by bringing on Messi. Afterwards, he claimed that he did not want to deprive the fans to miss watching the best player of the world play. Nevertheless, the day belonged to their captain Andres Iniesta, who was just the third man after Ronaldinho and Maradona, to be applauded by the Madrid crowd for his superb display in the game. Enrique also got his first victory against Madrid in an away game as Barca’s coach.

In his first ever European final as a coach, Enrique’s Barca went up against Massimiliano Allegri’s Juventus, where both teams were on the verge of winning a treble, having ensured a domestic double prior to the final. This was also Xavi’s final appearance for Barcelona and his teammates planned to give him a perfect send-off by winning the Champions League.

Barcelona easily won the game 3-1 with goals from Rakitic, Suarez and Neymar ensuring the club’s fifth Champions League victory. Juventus, at one point of the game equalized from Morata’s goal but ultimately  bowed down to the superiority of Barcelona. The win ensured a second treble for Barcelona and they became the only club in history to win it twice. Enrique’s first season at the helm thus ended with 100% success. Enrique surpassed Guardiola’s 2008/09 team that also won a treble since his side had more wins and scored more goals, thanks for the latter achievement to his invincible trio of MSN.

This is undoubtedly the best match played under Enrique’s coaching and possibly one of the very best matches in FC Barcelona’s history. An abysmal performance in the away leg against PSG led to a 4-0 loss for Barca. In the return leg, they had to overcome that deficit, something unprecedented and impossible in the history of Champions League.

Sergi Roberto scored the deciding goal for Barcelona vs PSG

Prior to the game, Enrique claimed that his side would put five or even six goals past PSG’s defense. As the match progressed, PSG’s monumental lead started falling apart. Barcelona were 2-0 up in the half-time and Messi scored the third goal just after the break. Cavani scored the much-needed away goal for PSG, halting Barca’s tempo. However, two goals from Neymar in the dying minutes of the match kept Barca alive in the tie before Sergi Roberto’s 95th minute winner ensured Barca’s qualification to the quarterfinals.

The whole Camp Nou erupted after Roberto’s winner and the coaching staff along with the players went berserk with their celebrations. In the end, Barcelona were knocked out in the quarterfinal by Juventus but La Remontada will always be a historic night for the Cules.

Luis Enrique left Barca on a high note, being the third most successful manager with nine titles and just below Cruyff (11) and Guardiola (14). The low points of his stint would be the constant rotations with his starting XI, his partial failures in the transfer market in unnecessary spending for players and not having enough confidence on La Masia products to shine in the main squad.

Bar these failures, his transfers of Bravo, ter Stegen, Suarez, Rakitic and most importantly, Samuel Umtiti is still doing wonders for the team. Especially, his frontline of Messi, Suarez and Neymar are the most lethal in today’s football world.

Enrique leaves after having accomplished his mission

Enrique’s tactics were also appreciable in the sense that under his guidance, Barca moved on from their over reliance upon tiki-taka and played long balls to the front, scoring quick goals. However, his major tactical weakness was failing to contain teams that pressed high up the pitch against Barca. Additionally, the constant squad rotation to overcome a weak bench led to many losses and that is a place where Ernesto Valverde will look to improve.

Luis Enrique surely leaves as a satisfied man. While the Blaugrana fans will not regard him as much as they regard Pep Guardiola, Enrique was the perfect man for the job when he stepped in and leaves at the perfect moment when a change in the leadership is essential. But the man has done his part well, always shielding his players from the media and taking the blame for the losses upon himself as well as delivering trophies at a constant basis. Adios Lucho! 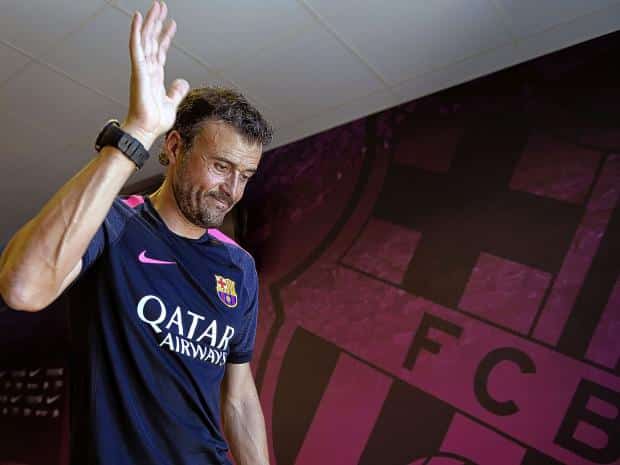