Following the withdraw from Zinedine Zidane, Laurent Blanc, and Mauricio Pochettino are now the leading candidates to become the new Red Devils boss.

Pochettino was last seen in the Premier League with Spurs, and had a wonderful five-year spell, taking them to a Champions League Final in 2019. He also guided the North London club to a third-place Premier League finish in 2015/16, and a runners-up spot in the following season.

The most notable moment of his time at Spurs came in that epic semi-final clash against Ajax.

Spurs came to the John Cruijff Arena with a 1-0 deficit and although they conceded a 2-0 lead inside 30 minutes, they were able to turn things around through a Lucas Moura hat-trick, with the third being the winner in the dying seconds of the game.

He also won the Coupe de France with 2020 Champions League runners-up Paris Saint Germain and saw them to a runner-up finish to Lille in the French Ligue 1 in 2021.

However as he signed a contract in June to remain at the club until 2023, is he willing to sacrifice the two-year deal and come to Old Trafford?

Meanwhile, another ex-PSG Manager also has his eyes on the job. 56-year old Blanc is known as one of the world’s top managers. He took charge of the French national team in 2010 and made them qualify for Euro 2012.

In that tournament, France reached the Quarter-finals, where they were beaten by defending champions and eventual winners in Spain. Blanc then stepped down as the Head Coach post that tournament.

He then joined the French giants for a three-year deal in 2013. PSG won the French Ligue 1 in his first season and then a consecutive domestic treble in the following season made him one of the world’s top Managers.

Both of these mangars like to employ a more fluid and attacking style to their play. Pochetino usually prefers working with a 4-2-3-1 formation, which enables the team to attack as well as maintain a good shape in terms of defending. Blanc is more possession-based and likes to attack his opponents by controlling possession.

He also had a 72.9 win percentage record with PSG, which consists of 126 wins out of 176 games. When United was at their peak under Sir Alex Ferguson they used to hit teams with waves of attacks whilst maintaining a good shape in defence. Blanc looks to have a similar approach to that, so, should he be given the nod by Woodward, it wouldn’t be surprising if we saw shades of Ferguson’s United under the Frenchman.

So these are the two leading candidates for the hot seat at Old Trafford, who will the Board of Directors go with?

Poch, Blanc, or someone else?

Stay tuned to World in Sport for more updates 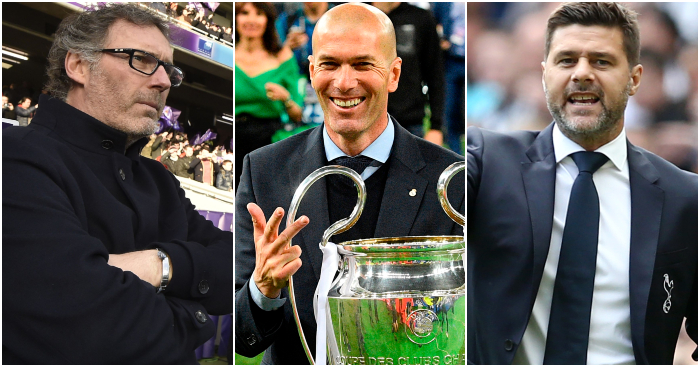