Kevin Harvick won the pole and the first two stages. Aswell as leading a good chunk of the laps,but he stumbled when it mattered when he sped on the last pit stop after a late caution. That caution came when Austin Dillon and the No. 3 machine lost a battery.Harvick had to restart at the tail end of the field with 12 laps left, Kyle Larson took over as race leader.

On the late restart Larson got away from what was working for him all day,drifting up to take the high line,this proved to be costly as Keselowski eventually took the lead from Larson, Keselowski was able to take control from their on out.Larson, Matt Kenseth, Kasey Kahne and Chase Elliott rounded out the top five. Kevin Harvick attempted to make a comeback but their were to many spots to make up with not nearly enough laps to do it in,he salvaged a ninth place finish.

“We had a lot of adversity today. There’s no doubt about that,” said Keselowski, who won for the first time at Atlanta and for the 22nd time in his career. “These races aren’t easy. They’re 500 miles, and a lot can happen, and when you think you’ve got it, they slip away. I know how it goes.

“This one kind of fell in our lap at the end, and my team put it all together when it counted. They gave me a great Autotrader Ford Fusion, and we were able to get by Kyle there at the end. I knew that he wasn’t going to be easy to pass. His car was great, and I was able to make the right moves to get by him.”

Keselowski had issues of his own on pit road earlier in the day, giving up 13 positions at one point when his pitcrew failed to get all lug nuts on his tires.Pit-road penalties also hit a number of drivers, including Chase Elliott, Joey Logano, Jimmie Johnson, Martin Truex Jr., and Dale Earnhardt Jr.Denny Hamlin broke a track bar and ended up burning a number of laps getting repairs in the garage.
A solid run by Clint Bowyer fell apart later on in the race when he run into the outside wall twice, the second time causing significant damage to the right side of his Ford. The incident ended up in the race’s fifth caution.

It was not a great race for Hendricks driver Jimmie Johnson.He was caught speeding twice on pit road, and pass-through penalties kept him laps down and in mid-pack.

Harvick leaves Atlanta with two additional playoff points for winning the first two stages of the race. He also holds the series lead by four points over Stewart-Haas Racing teammate and Daytona winner Kurt Busch. Keselowski is third in the standings, six points behind Harvick, earning five playoff points for the victory. 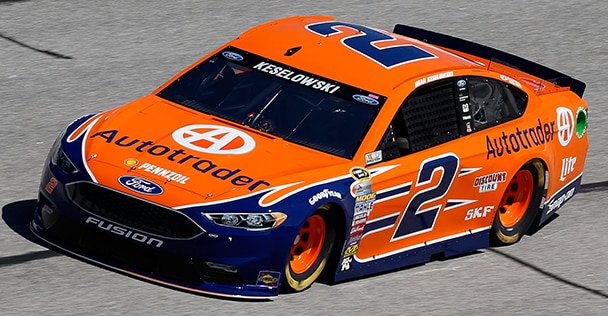