Barcelona are the winners of the 2014-15 UEFA Champions League. They were simply too good for Juventus, who fought tooth and nail and even managed an equaliser in the second half. Suarez found one moment of inspiration and Neymar redeemed for his disallowed goal in the very last moments of injury time.

Once again, Barca’s striking prowess proves too much for another top team. Barca are also the first team to achieve the treble twice.

With the win, Barcelona clinched its fifth European Cup victory to tie with Liverpool and Bayern Munich. Only AC Milan, with seven, and La Liga rivals Real Madrid, with 10, have more.

Barcelona also became the eighth team to clinch the treble by winning their league, their country’s main domestic cup and the European title. They became the first team to ever do it twice. The last time they was in the 2008-2009 season.

As one might predict, the celebration was wild. Obviously, there were the requisite hugs and some players brought out special gear to wear. He may have lost his shirt, but Neymar gained a white headband that read “100% Jesus.” Other players wrapped their home country’s flags around their waists.

All players shouted, jumped and sang while team manager Luis Enrique, who had one of the best first seasons ever, was thrown into the air. 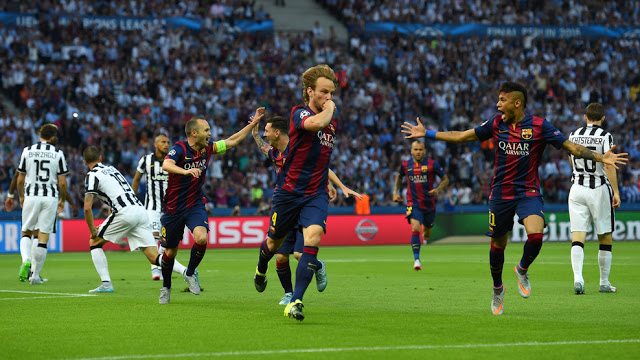