Football as a spectacle for the past 18-months has resembled a post-apocalyptic state. Desolate stadiums, fake fan noise, and even cardboard cut-out supporters. These seemingly dystopian times have had us all longing for the return of the game we all love and cherish.

At times, it appeared the game as we know it, was slipping through our grasp; The introduction of the so-called “Super League” threatened the way we watch football, from fans and supporters, the lifeblood of football clubs, to armchair consumers- prioritising those most powerful, and wealthy.

Yet after the swift disbandment of the “Super League”, and the hope and romanticism the European Championships restored- our game was on its way back.

This weekend saw the beginning of a new dawn in the EFL, and with it, the return of the heart and soul of football; the fans.

AFC Bournemouth vs West Brom was the curtain-raiser for another unpredictable, tumultuous season in the Championship. To add a little extra interest to this affair, it was Scott Parker and Valerian Ismael’s managerial debuts for their respective sides.

The Cherries took the lead twice, early in the first and second half, with goals from Marcondes and Billing to make it 1-0 and 2-1 respectively. The Baggies demonstrated both resilience and stealth to overturn the deficit twice, cancelling out both goals with little fuss, through O’Shea and Callum Robinson’s efforts.

On Saturday, Hull City was the surprise package, dispatching Preston North End away at Deepdale with an emphatic 4-1 win. Preston was abject, despite going 1 to the good.

In response, Hull bagged four, Lewis-Potter, Smallwood, Macgennis, and Cannon all converting. If this result is anything to go by, Preston is in for an arduous road ahead, with Hull silencing the critics. It’s safe to say, Preston was well and truly “mauled by the tigers”…

Luton Town also got off to a flyer- putting newly-promoted Peterborough to the sword. With a makeshift back four, Luton was heading into this game on the back-foot. However, it was Luton who drew first blood, Onyedinma’s corner was met by last season’s revelation, Elijah Adebayo to put the Hatters 1-0 up.

The second followed shortly after the break, again Onyedinma crossed to tee-up Harry Cornick, the second assist of the game for the Luton man. Just three minutes later, Fred Onyedinma finished off an impressive debut in style – slotting the ball home to make it 3-0 and securing the first-day victory.

Opening day wins for Blackburn (vs Swansea) and Stoke (vs Reading) see them finish the weekend in 3rd and 4th. Blackpool’s return to Championship football ended in a 1-1 draw away to Bristol City, with the tangerines snatching a last gasp draw from the jaws of defeat.

Wayne Rooney’s troubled Derby played out a 1-1 draw with fellow relegation favourites, Huddersfield at Pride Park. QPR and Millwall took a share of the spoils in a hotly-contested 1-all draw, as well as Cardiff and Barnsley who chalked up their first points of the campaign.

Saturday’s late kick-off played host to recently relegated Sheffield United against the hopeful Birmingham City. Bramall Lane is renowned for its iconic atmosphere, and the Blades have missed fans being in attendance more than most, or so it seemed… after an early bombardment from the home side, it was The Blues who capitalised on their chances.

A great ball in from Beja was met by the grateful head of Maxime Colin, guiding the ball into the back of the net. In spite of Sheffield’s vastly superior possession, it was Bowyer’s men who came away with the points.

Sunday’s games saw Fulham take on Middlesbrough in the early kick-off, followed by Coventry against local rivals Nottingham Forest. In the first game of the day; Fulham took the lead within the opening third, new loan signing,

Harry Wilson struck home on the 29th-minute mark to put the hosts 1-0 up with a superb low-strike going into half-time. Yet it was Boro who took the initiative in the second half, Marc Bola silenced the Cottagers scoring from an awkward angle to level the scoring.

Coventry was another side who’s not only missed supporters in attendance but who’ve been unable to play at home in Coventry for 2 years. However, the happy return to the Ricoh Arena was short-lived. Lyle Taylor opened the scoring for the visitors on the half-hour mark, taking Chris Hughton’s side 1-0 up going into the interval.

As the old cliche goes, football is a game of two halves, and it very much was. The Sky Blues pressure took its toll, Gyokeres equalising in the 81st minute before Karl Mcfadzean slotted cooly past Brice Samba in the last minute of stoppage time to send the Ricoh into a frenzy. 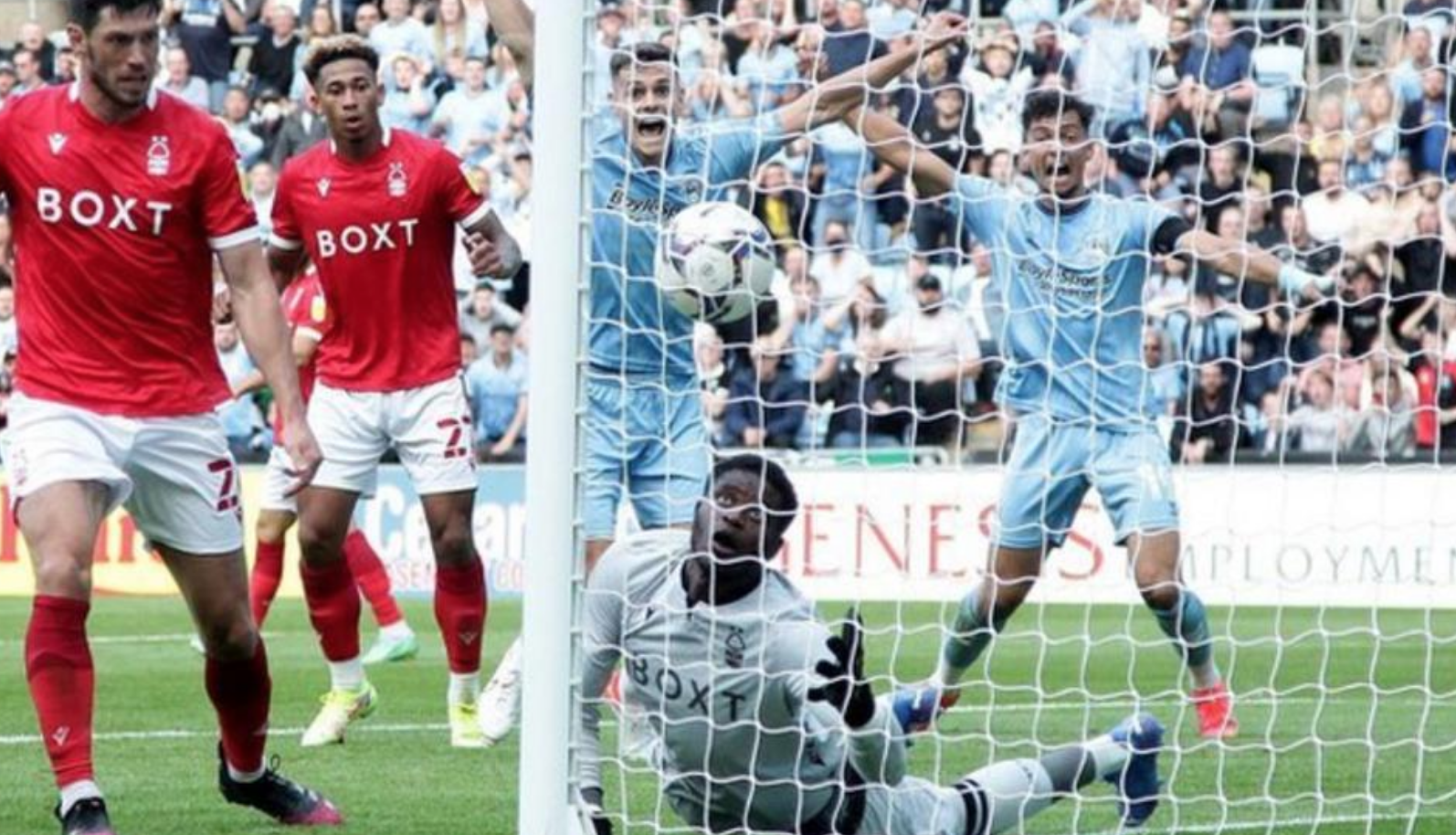