Skip to content
You are here
Home > US Sports > Nascar > Dale Earnhardt Jr. wins in wild fashion at Daytona 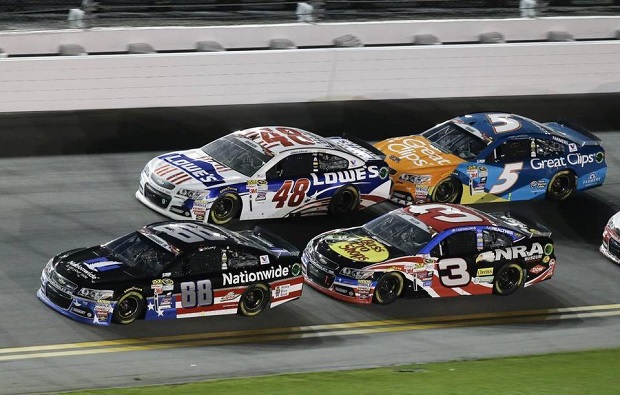 The finish of the race was overshadowed by a scary crash that sent Austin Dillon’s car flying into the catchfence. Dillon was helped from his car by crew members and safety workers and walked away, waving to the crowd. He suffered a bruised tailbone and forearm and was released from the infield care center. Track president Joie Chitwood III said 13 fans were examined at the scene where debris from Dillon’s car came through or over the fence entering Turn 1.

The crash occurred when Denny Hamlin, running just behind Earnhardt, got a tap from Kevin Harvick and spun in front of a large pack of cars running side-by-side just past the start/finish as the checkered flag waved. As Hamlin veered back up the track he clipped Dillon, sending him towards the outside wall and launching him over other cars and into the catch fence.

“Just thank the good Lord for taking care of me and for what NASCAR has done to make the sport this much safer,” Dillon said. “I just hope everybody in the stands is all right. That is the next biggest concern. Just praying for everybody and glad the good Lord looked out for me tonight.”

Earnhardt won his second straight plate race early this morning, taking the Coke Zero 400. Earnhardt, the pole sitter, led for 97 of the 161 laps. It was his fourth career win at Daytona. Jimmie Johnson, who led for 35 laps, finished second. Denny Hamlin, Kevin Harvick and Kurt Busch rounded out the top five.Originally set to begin around 8 p.m. ET, rain showers postponed the start of the race for more than three hours.

has published a new post."Nunn, Heat Back in Win Column Against Spurs"
7 hours ago