The 6-3 score-line ultimately flattered Manchester United on Sunday as they were thrashed by neighbours Manchester City. Prior to the game, United fans were hopeful of a positive result as the side came into the derby on the back of four successive wins in the league. There is a sense that the four-week break United endured due to the postponements of fixtures and the international break this blocked the team’s momentum. While this could possibly a factor, it does not hide the fact that the players did not turn up in such an important game. The travelling supporters have somewhat been used to diabolical away performances from this side and this defeat was no different as the majority of the away fans had left the stadium before full-time. We will look at why the humbling United received in the derby shows they are still miles off the teams of Manchester City’s ilk.

Lack of belief was worrying

The lack of belief shown by the United players in the first half was worrying. It seems that the horrendous season they endured last year has had a lasting impact on them psychologically which still affects them today. This has been on display this season when they have suffered setbacks and it was clear to see in the loss yesterday. After City scored the first goal there was a sense of inevitability that they would score more and kill the game off, which is exactly what happened. Defensively, Raphael Varane and Lisandro Martinez did not commit glaring and obvious errors which led to goals. It was the constant pressure City put on that proved to be overwhelming and damaging.

Fans had been crying out for a established defensive midfielder to come into the side for the last couple of years. This wish was finally fulfilled this summer as the club signed Casemiro from Real Madrid, who is arguably one of the best options in the world in that holding midfield role. Scott McTominay has enjoyed a good start to the season so far and Erik Ten Hag has rewarded him for his good performances by keeping him into the side. Christian Eriksen and Bruno Fernandes have also been good and Ten Hag decided to stick with this midfield against City. There was a lot of talk prior to the game with fans calling for Casemiro to start alongside McTominay to deal with City’s overloads in midfield. In hindsight, this appears to be the decision Ten Hag should have made as his side’s midfield was completely dominated.

Going forward Casemiro must be integrated into the starting eleven as he will definitely add a sense of defensive solidity to the side and he also possesses the quality on the ball to progress the ball efficiently between midfield and attack in transitions. The issue that arises with this is whether McTominay drops to the bench or one of Fernandes and Eriksen drop out. At the time, many felt Eriksen was brought in to provide cover and depth for Fernandes’s role however the Dane’s terrific performances have meant is has been impossible for the manager to leave him out. In the bigger games where United will be on the backfoot, a midfield duo of Casemiro and McTominay is likely to do well and when they face lesser opponents, they can revert to a more attacking and ball-dominating midfield.

Under Ten Hag we have seen an ability of bouncing back after poor performances and it is clear that he will be demanding so much more from his players as he has no doubt improved the standards somewhat since coming in. If you look at Jurgen Klopp and Pep Guardiola, they underwent dips in the first season and so far, it appears United are heading in the right direction under this manager and were beaten badly by one of the world’s best teams on Sunday. This however does not excuse the players for not applying themselves adequately and not really turning up. 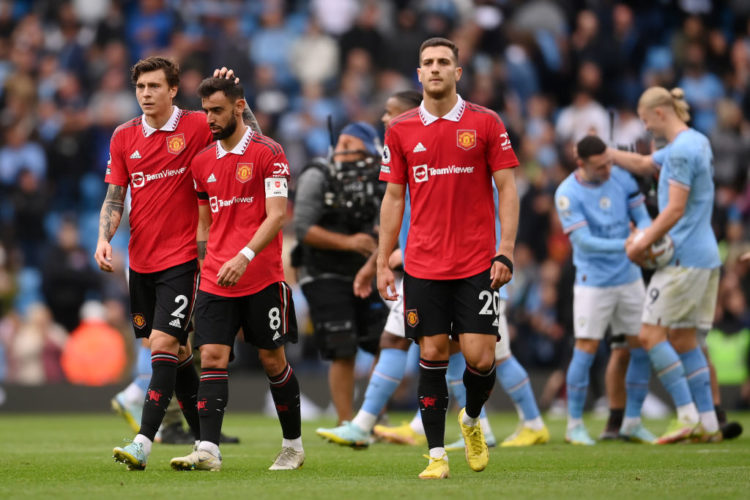