Will it be the fourth year that Barcelona faces a humiliating season or will they get their hands on the Champions League trophy for the sixth time?

It has been a long time since 2015, that Barcelona last won the Champions League. What’s more disheartening are the heavy losses, the team has been suffering for the past few years. Obviously, last year’s famous 8-2 thrashing from Bayern Munich highlighted the hollowness created in the team.

And the Board of the Blaugranas seems to have done well to fill up space. The mass exodus of some of the biggest players of the club created a lot of fuzz on the internet. But the team also had a few good additions and additionally, this will finally give a chance to the talented products from La Masia to showcase their abilities. The club can look to have a great season ahead, propped by a few integrating factors.

Coutinho has returned from the Bundesliga and looks stronger and more technical than ever. He had an amazing restart of his Barcelona career. He already has 1 goal and 2 assist to his name, but stats are not the yardstick to measure the performance of a player like him.

The mere presence of the Brazilian is an advantage. He adds a lot of creativity and talent in the midfield. Coutinho will be the link of connecting the midfield to the attack. Especially after his big success with the loan spell with Bayern, he looks set to repeat the same with Barcelona.

Barcelona fans all over the world are obviously rejoiced to see their captain back at his best. Probably for every Barcelona fan, the smile he gave against Villarreal was more than the Champions League trophy. Messi had a great start to the season, with a goal and assist and a fruitful international break with Argentina.

Messi alone can win you the Champions League and now he has players like the wonder kid Ansu Fati, Coutinho, and Griezmann at his side.  If the board manages to keep the legend patient and satisfied, he will single-handedly bring home the coveted trophy.

The defence of Barcelona has been the talking point for a quiet few years now. But this season things look different. Jordi Alba and Gerard Pique at their ripe age seem to be back at their best.

Clement Legnet, after a tough season last year, now is delivering sturdy performances. Along with this, Barcelona has secured Soringo Dest who will add a lot more pace to the backline. At least of all, the man of all-season, Sergi Roberto also looks focused.

Though Barcelona may have conceded a few goals in the last few games, never did their defence look un-organised the way they were last season. The pressing looks organised and focused. There is a clear rhythm between the full-backs and the central defenders, and above all, there seems to be an abundance of passion and commitment in their play.

A Look of Caution

Though there may be many promoting factors, there are a few demining factors too. The first thing that would be a cause of concern for any manager of the team is growing age. Lionel Messi, Jordi Alba, Sergio Busquests, Gerard Pique, Sergi Roberto, all are now in their thirties. Also, Philippe Coutinho, Antoine Greizmann and Mirelem Pjanic no more represent the youth.

The only young regular players in the team are Freinke de Jong, Ousmane Dembele, Seringo Dest and Ansu Fati. Any injury to the aged stars can take a long time to heal. This could sideline them for a while.

These injuries could come calling during the late-on, during the knock-out stages of the Champions League. The stress levels and pressure mounts up, and the situation could turn on Barcelona.

Barcelona has a great team and the greatest player’s. But to get the best out of the players, the team must be in good hands. If the board and the staff can make things strike in the correct way, the path is bright for Blaugaranas. 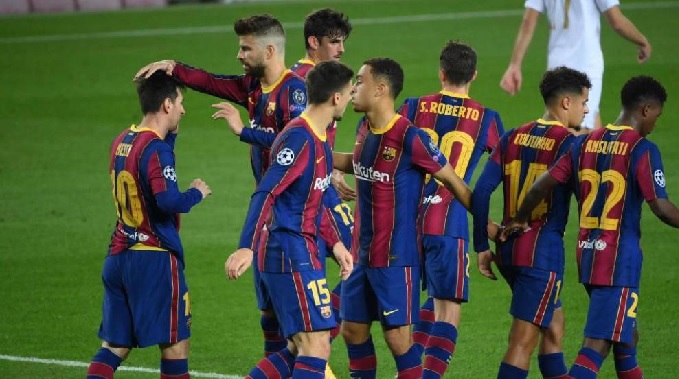