Mikel Arteta will come up against his former mentor in Pep Guardiola tomorrow, where Manchester City will entertain Arsenal.

This will be one of the two games taking place tomorrow, as the Premier League returns to action after a 3 month enforced break.

Arsenal boss Arteta, will be looking to shrug off the label as “Guardiola’s Apprentice”, after serving three years as assistant manager to Pep at the Citizens. Although Arteta may not disagree with the influence the Catalan had on him as a leader, Arteta has come to Arsenal to build his own name and a reputation of his own.

It is clear that Guardiola thinks highly of his former apprentice; accompanied by a wealth of respect and trust. Six months into his post as assistant manager for City, Arteta was entrusted with the task of preparing the Blues for a game against his former playing club Arsenal.

Guardiola’s trust in his former number two paid off, with City coming out 2-1 winners at the Etihad that day. This was an early indication of the potential that Pep saw in Arteta as a manager.

If you’ve watched the Amazon Prime documentary ‘Man City: All or Nothing‘, you can see the influence Arteta had in the City camp. The experience and knowledge he gained from working under the Catalan, has proven to be a key asset in securing the Arsenal manager role.

In Arteta’s first game as Arsenal boss (vs Bournemouth on Boxing Day 2019), you could see Guardiola’s influence had rubbed off on his Spanish counterpart. One example of this was the use of Arsenal right back, Ainsley Maitland Niles. Arteta instructed him to tuck into central midfield, a tact used by Pep with Oleksandr Zinchenko and Kyler Walker at City a few years earlier.

Arteta’s style of play is very similar to Pep’s. Arsenal have adopted a very similar attacking shape to City; Arteta strongly enforcing the short-passing build-up play that Guardiola has mastered during his managerial career.

Defensively, Arsenal have kept seven clean sheets in 15 games under Arteta, compared to one in fifteen prior to his appointment. Despite the improvement in less goals conceded, shots at the Gunners goal are still coming thick and fast.

Guardiola took a whole season, before he could properly hit the ground running at City; securing the Premier League title in the 2017/18 season; his second season at the helm. Guardiola then went onto win the domestic treble in the following season (2018/19). Arteta will hope to replicate a similar transition at Arsenal. Despite harnessing his former mentor’s tactical and management prowess; will the Arsenal boss adopt Pep’s trophy winning mentality?

It is out on the pitch, where Arteta will need to mould and improve the Arsenal squad he has inherited. One of the drawbacks Arteta has, is the amount of financial backing he will receive during the transfer market. It seems that City have a bottomless pit of transfer funds to work with; compared to Arsenal’s less fortunate financial backing. The setback could be made bigger if Arsenal fail to reach Champions League qualification this season.

A defeat at the Etihad on Wednesday, could prove to be costly for the Gunners, if they are to reach the top four. With City’s ban from European football, a fifth place finish will be enough for Arsenal to reach this objective. Arsenal currently sit in 9th position, five points behind 5th placed Man United. Momentum will be vital to them during the influx of fixtures.

Not many teams have come out victorious at the Etihad in recent seasons. However, with the fixture being played behind closed-doors, anything could happen. Away-wins have been common since the return of the German Bundesliga a few weeks back. Could the Premier League stats follow suit?

The inside knowledge gained by Arteta during his City tenure, could prove to be crucial in tomorrow’s clash.

I’m sure all Premier League managers have been using their time wisely, to plan for the constant run of fixtures in the coming months. However, it is Arteta who will have been putting in overtime to find the cutting edge into beating Pep’s Man City side. Pep on the other hand, will no doubt be devising a plan to prevent this David v Goliath analogy from making the headlines. Arteta has a long way to go in his managerial career, but a victory at the Etihad could be the kick start he needs to make him a potential top manager. 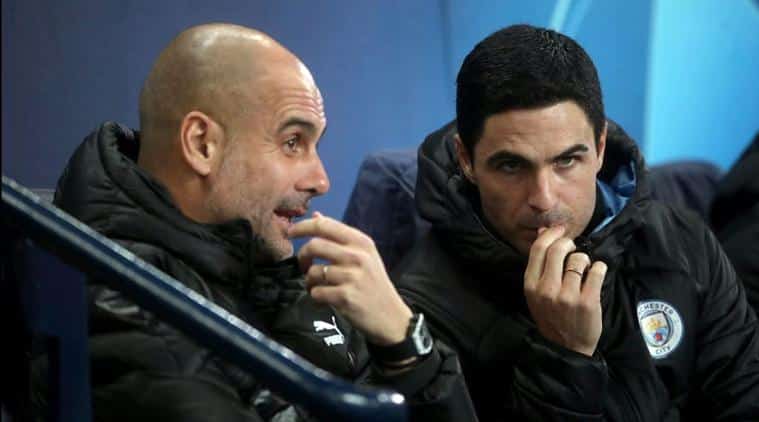