With the season coming to an end with just 9 matches remaining and the leaders comfortably on top and second place sealed, the race for 3rd and 4th spots are in for a grab.

This thread is mostly focussed on the potential lineups for Manchester United in the next season. But, said that the lineup could also be used for the remaining 9 matches as well. 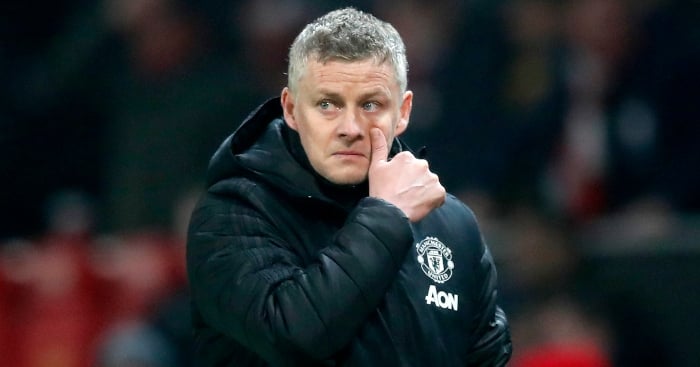 This could well be the case amid the corona virus pandemic as clubs would be reluctant to spend huge amounts of money on players to bring them in. Said that, Manchester United from the start of last summer have purchased 5 very good players namely Bruno, Maguire, Wan Bissaka, Dan James and Odion Ighalo.

So, it is very much possible that they won’t sign anymore players and go ahead into the next season with the same players. It is a huge challenge and a great opportunity for Ole to play both Paul and Bruno in the same 11, as they have to complement each other and help the team with their amazing vision and attacking football capabilities.

The following could be the lineup with the same 11: 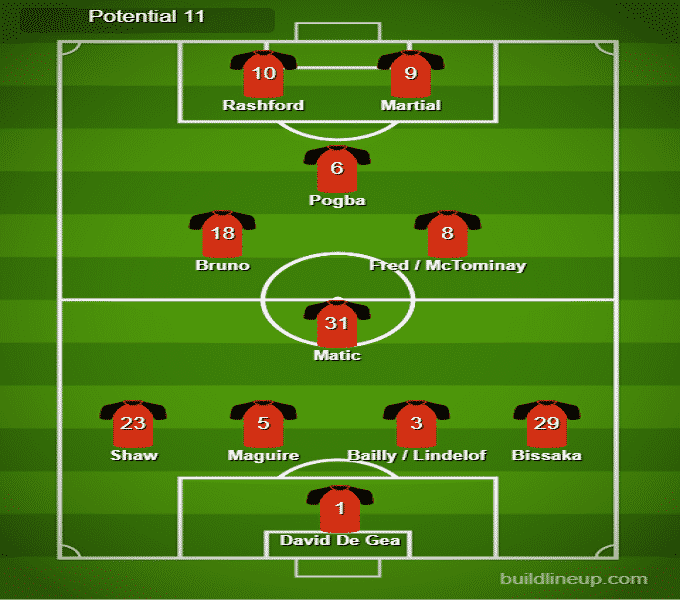 This could be the formation Manchester United could most likely use going forward keeping all the bases covered.

There is no doubt with the goalkeeper being De Gea, he is phenomenal in his reflexes and his feet too. Yes, there has been mistakes from him which you don’t just expect from a player of that quality, but I don’t think it would hinder any chances of him playing. About Dean Henderson coming back from Sheffield, then there might be competition for places but in the PL, Ole would most likely go with De Gea.

The central defense would be obviously captained by Maguire, and the second central defender would be a dilemma because both lindelof and bailly have played amazingly well in the chances they’ve got. But it seems Ole has quite a faith in Lindelof and he might be the man. Just so you know Lindelof has not been dribbled past even once this season. No questions about right back, hands down wan bissaka his tackles are ferocious and helps in attacking too. LB can be contested between Shaw and Williams but Shaw given his form should be first choice.

Coming to the mid-field, Matic retains his CDM spot because of his experience and always being at the right place at the right time. Bruno, you can just ghost about, given the free role to create and run all around the pitch. One among fred and McTominay basically to win balls and feed them to Bruno or Pogba. Pogba given the number 10 role would be perfect, because it just unleashes him to score and assist more goals. Given the defense dillema now sorted, he wouldn’t have to worry about going back.

The front two strikers would be Marcus and Martial with Martial playing the proper number 9 role, whereas Marcus would run down the line from the left flank which he loves to do and feed in balls to Martial or score himself.

All in all this formation looks perfect where each player’s role perfectly defined and a good omen for Manchester United fans as there will be much more of counter attacking, attacking from the front and scoring goals which they’ve missed with the absence of Bruno and Pogba. With both Martial and Rashford on the way to score 20+ goals this season the prospect looks amazing.

There are more encouraging signs for fans as Ole’s side has been linkedup with many promising names with the likes of Harry Kane, Jadon Sancho,Jack Grealish, Van de Beek among others. Jadon Sancho being the most promising one, as Manchester United need someone prolific to run down the right wing and take on players, score goals and provide assists all of which is done perfectly by Sancho. His following stats speak for themselves : 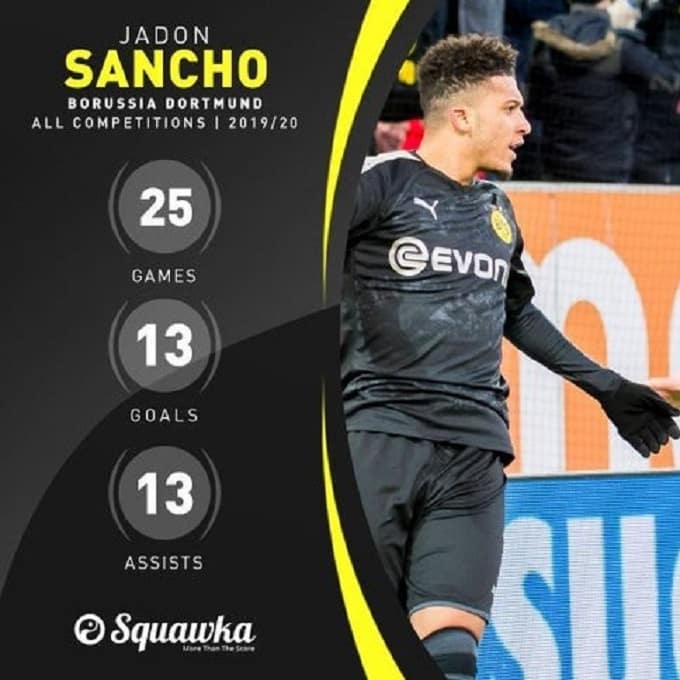 Manchester United would think of buying another midfielder only if Paul Pogba decides to leave them this summer. Which is unlikely too because of the massive 120m price tag put on him, which really narrows down to a very few clubs that can afford.

It is very difficult to state post corona virus whether a deal this big i.e around 100-120m euros would take place as the financial state of every club is affected tremendously.

Being said that, this is how Manchester United could lineup with the only possible transfer that may happen. 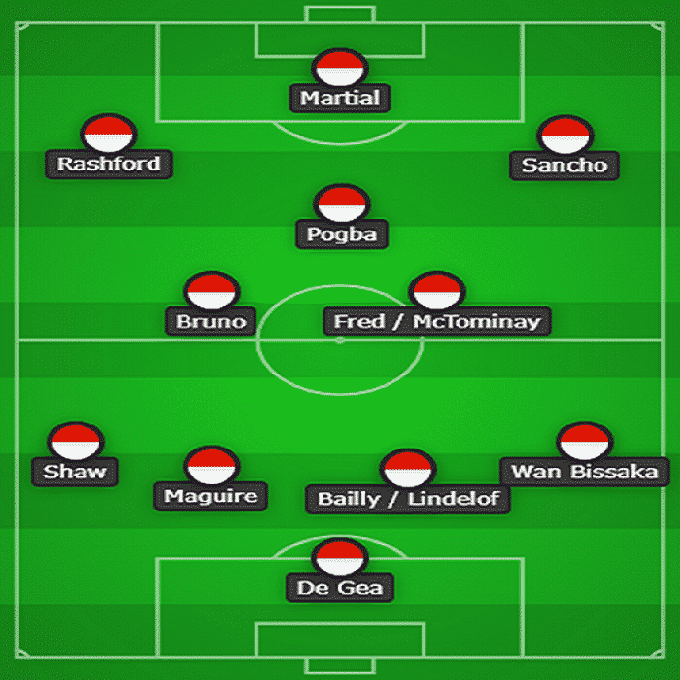 This leaves Matic out because of the more attacking approach it has with defense and gk same as the team before. This formation literally unleashes Rashford and Sancho on the wings with lots and lots of balls coming their way through Pogba and Bruno and the team really looks dangerous with lots of quality all around. Martial does need to step up his consistency and score many more goals and be clinical with the quality around him.

Ole does sometimes against big teams play a 3-5-2 formation which has helped him a lot with counter attacking and the pace of Marcus, Dan James and Martial troubling the defense a lot. He’s been getting a lot of stick from pundits as to why he changes the formation a lot, but the results seem to show it has really worked in his favor. And the same methodology was once used by Sir Alex where he would change team formations depending on the opposition.

That said Ole has definitely turned the tide by bringing in players who are not in just for the money but really fit the Manchester United culture well as compared to previous signings. Being said, there are exciting days ahead for Manchester United fans.

Stay tuned in for more updates. 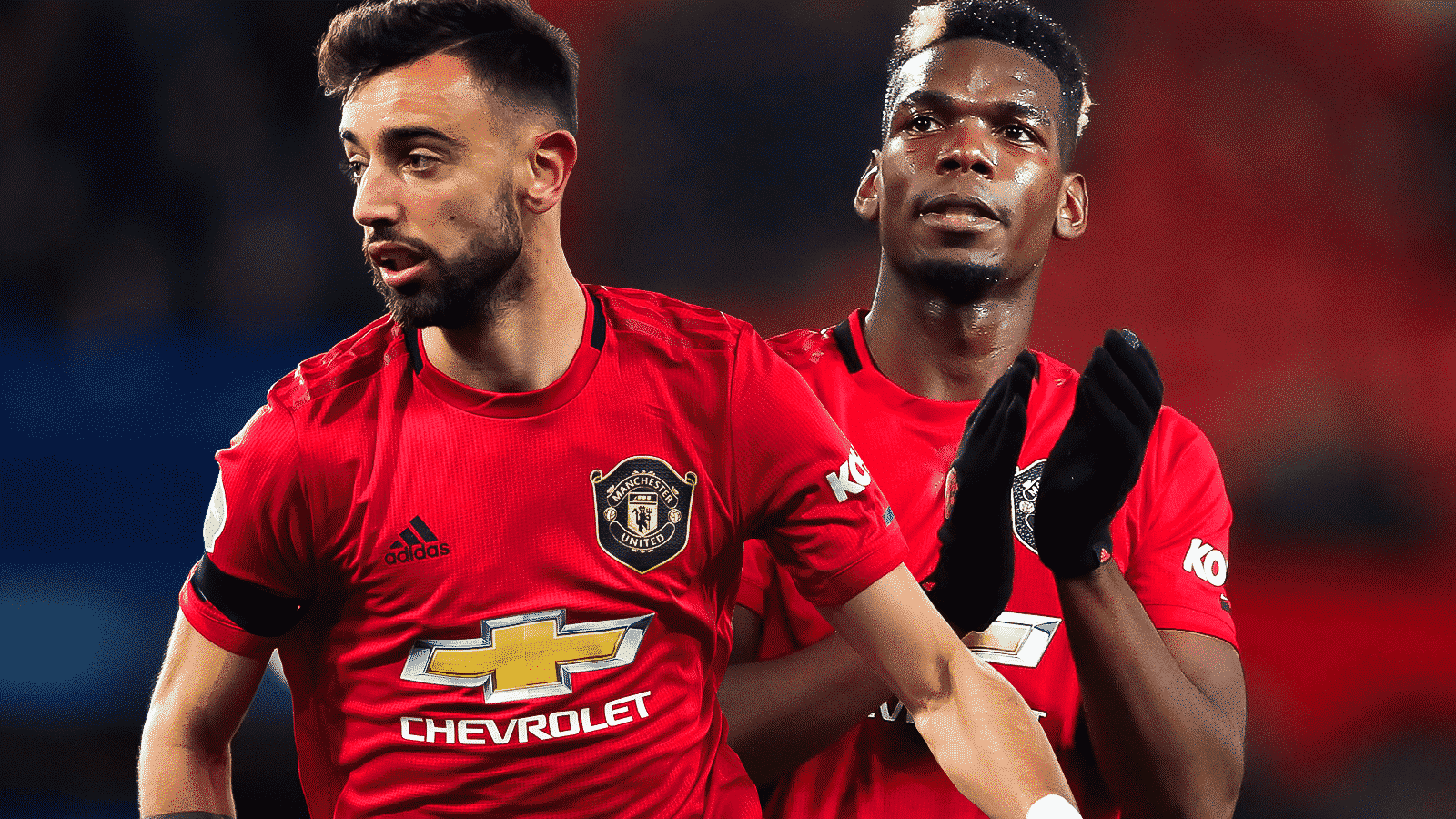