City dominated much of the game, with goals from Raheem Sterling, Kevin De Bruyne and Phil Foden; sealing three points for the Citizens, against a 10-man Arsenal.

Mikel Arteta will be disappointed not to come away with at least a point against his former employers. This game was initially postponed in March after the Arsenal boss (former Man City assistant Arteta), was tested positive for Coronavirus. This lead to the postponement of the Premier League as a whole.

It was also a night to forget for David Luiz, where he saw a red card for a mis-timed challenge on Riyad Mahrez in Arsenal’s box. Luiz’s mistake in the first half, also lead to Sterling scoring the first goal in the Premier League after it’s three month hiatus.

Despite Man City’s dominance throughout today’s game, their main concern will be on the condition of defender Eric Garcia; who was stretchered off towards the end of the game, after a collision with Ederson. The blow to Garcia was softened slightly when Phil Foden netted their third goal of the game in the 11-minute stoppage time.

A minute’s silence was observed before kick off, accompanied by players taking a knee in response to the Black Lives Matter movement. The same gesture was carried out in the previous game between Aston Villa and Sheffield United. (The game ended 0-0, despite a controversial goal-line technology error.)

City took control of the game right from the off. Arsenal stopper Bernd Leno tipped over a 20-yard free-kick, after which Arsenal lost Granit Xhaka and Pablo Mari to injury. David Luiz replaced the latter.

City continued to test Arsenal in the first half, with Sterling forcing a save from Leno, who amazingly denied David Silva moments after.

Sterling’s effort finally paid off at the third time of asking. David Luiz’s horror show of dealing with De Bruyne’s through ball, allowed the England star to rifle a shot past Leno into the back of the net.

The poor performance of David Luiz continued into the second half; leading to City’s second goal of the game. Luiz fouled Riyad Mahrez in the box, which lead to a penalty and a red card for the Arsenal centre-half.

Up stepped De Bruyne for the spot kick, who neatly tucked away the ball in the bottom right corner; doubling City’s lead.

City’s dominance of the game was overshadowed when a horrific collision between Ederson and Garcia, forced the latter to be stretchered off in the final stages of the game.

11-minutes were added on following on from the horrific incident. This presented a perfect opportunity for City youngster Phil Foden, to slot away a third for the hosts. The young midfielder tapped into an empty net following an attempt from talisman Sergio Aguero hitting the post.

Mikel Arteta would have hoped to have come away with something against his former mentor Pep Guardiola. However, it seems he will be walking away red-faced after a far from convincing display from his troops.

The Arsenal boss will be hoping for a response when they travel to Brighton on Sunday.

Man City on the other hand, will be hoping to end the season unbeaten, when they host Burnley on Monday. Man City must win all their games, if they are to come close to almost title winners Liverpool. The Reds are just two wins away from winning their first ever Premier League title and their first domestic title in 30 years. 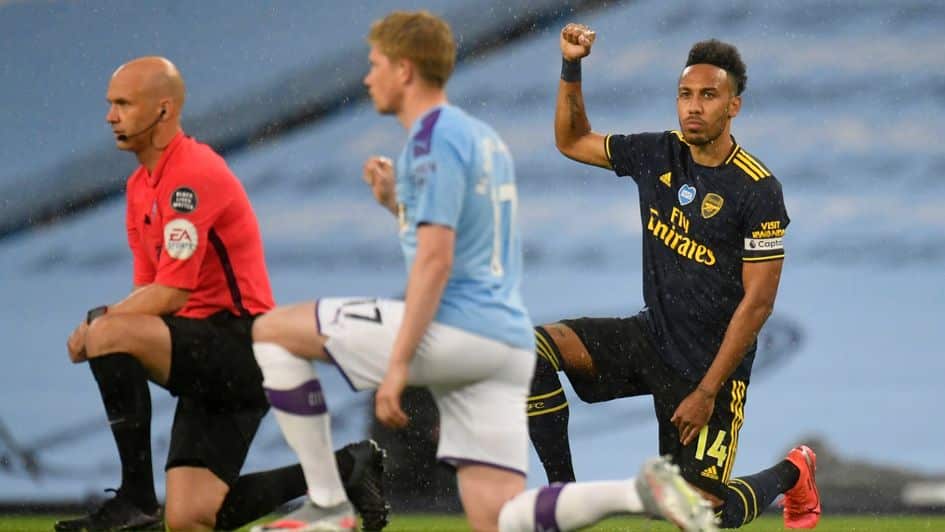