Erling Haaland did not feature for Manchester City against FC Copenhagen; Pep Guardiola spoke about the striker’s fitness after the game.

A goal ruled out for handball, a missed penalty and a red card made it a forgettable day for Guardiola’s men as they were held to a 0-0 draw to Copenhagen.

Haaland was on the bench but did not come on for Man City despite the team desperately needing a goal.

In the end, the draw still secured qualification for the last 16, after Borussia Dortmund’s 1-1 draw with Sevilla meant City can now play the last two games of their group with no threat of elimination.

Haaland spent the evening on the bench, Guardiola opted for this after and cited fatigue as the reason.

“ He [Haaland] finished the game against Southampton so so tired and he didn’t recover well these [last] two or three days. Yesterday was not good, today was a little bit better but not perfect and that’s why we decided not to take the risk.

“Erling didn’t feel really good after the game against Southampton, Phil also had some disturbing problems, Bernardo told us yesterday he was so tired. I didn’t want to take a risk.” Guardiola said after the game.

Haaland’s fitness issues come ahead of the huge clash with Premier League rivals Liverpool. Jurgen Klopp has always been an admirer of Haaland and praised him before his move to Man City.

“Good player,” Klopp told Sky Sports. “City wasn’t ever and will never be a team that wins games because of one player.

“They have a specific way to play and I think Erling will realise all of a sudden that he can score a lot of goals on the second post. He will love that.

Klopp on Haaland before the striker officaly signed for Manchester City

Guardiola described facing Liverpool at Anfield as “the biggest test” and with Klopp’s men struggling form, this clash will likely make or break Liverpool’s, currently weak, claim for the Premier League trophy this season.

Pep spoke about the game against Liverpool in his press conference; “We have four days to prepare for Anfield, and it won’t be any surprise to tell you how fascinating, difficult and competitive that will be.

“The biggest test, I would say, we can face in England is going to happen next Sunday.”

Haaland’s supposed struggle for fitness will likely determine whether Liverpool can beat Manchester City at Anfield for the first time since their 3-1 victory back in November 2019.

Manchester City face further fitness concerns alongside Haaland, with John Stones and Kyle Walker – likely to be ruled out for the game against Liverpool.

Stones has been injured since picking up an injury in England’s 3-3 draw with Germany. The Englishman quickly returned to Manchester for an assessment.

Guardiola gave an update on his recovery explaining “He’s getting better, not training, hopefully, he’ll come back and feel better,”

Manuel Akanji has been covering for John Stones and Kyle Walker at right back, with the Manchester City boss heaping praise on the former Dortmund player.

ALSO READ:  Can Arsenal Prove They Are Serious Title Challengers Against Liverpool?
Embed from Getty Images

“Yeah I thought he could [play at right-back],” Guardiola said on Saturday. “But there are players you have to explain 10 times, a player has to train 10 times there to do what you are thinking, what you want him to do. And this guy – we did just one training session and he got it.

“The movement you have to do as a full-back, the high pressing, he didn’t [practice] it once. And he did it perfectly. With the ball he’s a magnificent player. It proves again, intelligent people always pay off. Really good, Manu has made a huge impact since he arrived. Again the club made an incredible decision with him.

“When you are intelligent, I didn’t know him but you realise immediately,” Guardiola added. “I only had to tell him once and he knows it, the movement defensively at set pieces. He did it perfectly. It’s a gift for a manager, a gift.”

Liverpool sit 10th in the Premier League, albeit with a game in hand, while Manchester City are 2nd, one point behind league leaders Arsenal. 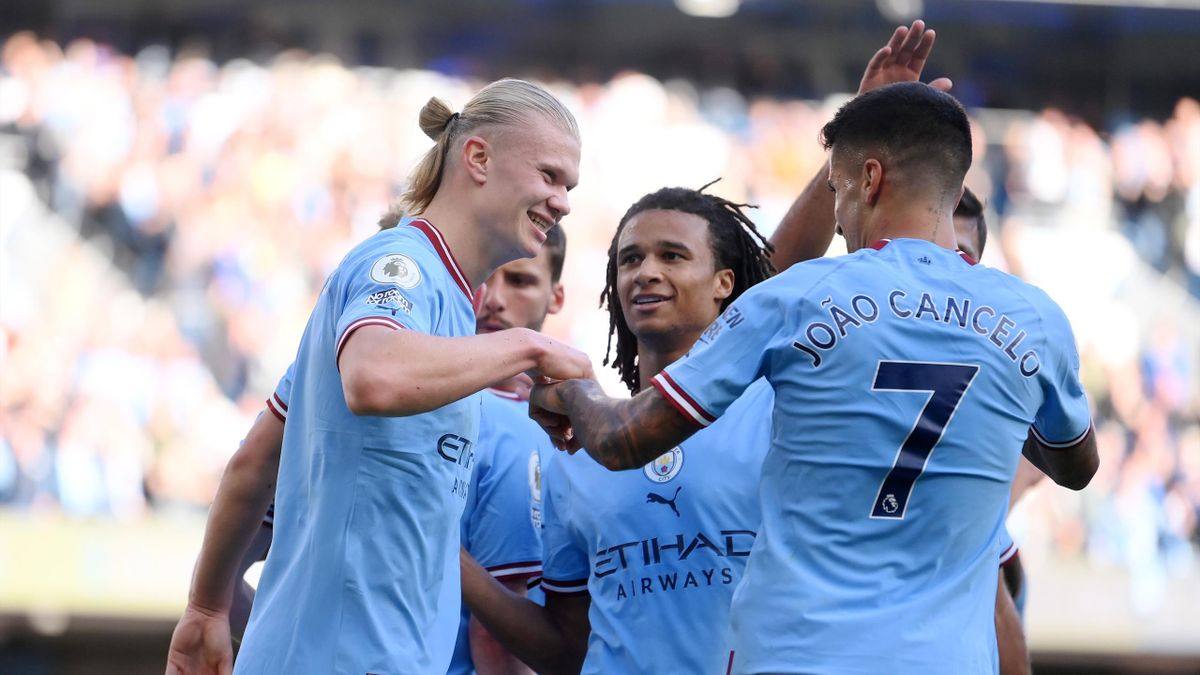