How the Hall of Fame Middleweight, Marvin Hagler, lost his middleweight crown and retired on the back of one of the most controversial decisions in boxing history

Marvin Hagler was inconsolable, gloved hands on hips, walking around the ring, shaking his head.

As a great throng of people surrounded the new champion, Sugar Ray Leonard, including his mother, who was kissing and hugging her son for all she was worth, one interviewer approached Hagler and asked him for his opinion about the decision.

“I mean, I beat him… I know it. He knows it. Everybody knows it. I figured I was beating him good…Ahh jeez. I stayed aggressive. I took everything he had. I made him fight…c’mon man, I won the fight.”

Caesar’s Palace, Las Vegas, Nevada, then the mecca of title fight boxing action. 1987. The contest was for the WBC, The Ring and lineal middleweights straps, and the title of undisputed champion.

Hagler was on a 7-year streak as the top dog of the division. His last two fights had been an all-time classic versus Thomas ‘the Hitman’ Hearns and a thrilling 11th round knock-out of game challenger, the fearsome John ‘The Beast’ Mugabi, who up to that point had TKO’d all his opponents in a spotless record.

Sugar Ray Leonard’s record was 33-1, his only blemish a unanimous decision loss to the legendary Roberto Duran, which he avenged with a TKO in the rematch – the infamous ‘no mas‘ (no more) fight where Duran turned away from Leonard in the 8th round and gestured to the referee that the fight was over. He was retired three years, blaming an unsatisfactory performance during his knockout victory over Kevin Howard in 1984, and a detached retina concern, for his decision to walk away from the sport.

Three years later, Leonard’s sabbatical from the ring ended when he was ringside for the Hagler v Mugabi fight on commentary duty.

Hagler v Mugabi was by popular opinion one of the most brutal, exhausting and physically damaging fights ever seen. After witnessing the fight, Leonard fancied his chances against the champion, reckoning that Hagler would be a weakened foe, with one too many gruelling wars in the tank, and that he was there for the taking.

To the surprise of the boxing world, the next morning, Ray Leonard went on a PR offensive, saying that he wanted to come out of retirement and make a comeback. But he would only do so to face one man: Marvin Hagler. After much toing and froing and will-they-won’t-they, a super fight was made, and two of the four kings of 1980s golden era boxing would go head to head in a winner takes all undisputed middleweight showdown.

There could not be a more contrasting matchup.

In the one corner, you have Marvin Hagler, the champion, undefeated in 11 years. A rough, tough, working-class, take your lunch box to work, blue-collar guy from the same town as Rocky Marciano’s home town of Brockton, Massachusetts. A boxer for the purists who had come up the hard way to the top of the sport.

In the other corner, you had Ray Leonard. Gold medal Olympian, American sweetheart, a pretty boy, advertiser’s dream, embracing with gusto all the Ali-shuffling, showboating, spotlight hogging, camera-hungry, pyrotechnical stylisation you could shake a glove at. A cocky showman, a limelight hound. In the ring, he ‘danced down the road of psychological savvy,’ as one pundit put it.

Yes, he was a world-class fighter, too. Yes, he could punch. Yes, he had good movement. But for the purists, there was a cruel streak of ego-led humiliation in the way he fought. Playing to the gallery, wearing opponents down by endlessly getting on his bike, always running around, before shooting in for the kill.

For those who like their fighters full of blood and guts engagement, the Leonard flimflam was anathema.

More ink has been spilt over the outcome of this contest than perhaps any other in boxing’s illustrious history. The fight itself was not a classic. No, on that the decision is unanimous. But what has caused the hotly disputed debate, discussion and arguments to this day are the judge’s scoring.

Everyone agreed it was close. Very close. But what nobody was prepared for was Judge Jo Jo Guerra’s scorecard: 18-10, in favour of Leonard. A decision that is so wide of the mark as to make a mockery of his position, and immediately threw up suspicions and accusations of a fix.

Was he was seduced by the showboating, the Hollywood moves, Leonard’s friend, Frank Sinatra in the crowd, the carefully choreographed bursts of speed designed to catch the eye rather than actually hurt the opponent?

Hugh McIlvanney, writing in The Times, called Leonard’s performance ‘ an epic illusion’ designed for one purpose and one purpose only: to influence the decision.

American broadcaster Tim Ryan echoed this point during the commentary: “It’s going to be difficult (for the judges) to separate what they admire in this performance (by Leonard) from what is actually happening.”

Before the fight, the calculating Leonard instructed his cornerman, Ollie Dunlap, to say ‘Dip and Slide ‘and ’30 seconds’ so that no matter what had been happening beforehand, he was going to razzmatazz the final seconds of each round. So out came ‘the flashy, round stealing flurries’ to catch the judge’s eyes. If you watch the fight now, you can hear the loudly bellowed ’30!’ from Leonard’s corner every time. “It worked like a charm,” said Leonard afterwards.

Duane Ford, chairman of the Nevada State Athletic Commission, said that Judge Guerra would not be invited back anytime soon to officiate at a fight. In an ironic twist, Goody Petronelli, Hagler’s co-manager, had vetoed British judge, Harry Gibbs, in favour of Guerra.

A poll of seasoned boxing reporters at ringside had it 18-16 in favour of Hagler and 6 of them had a draw, a result that would have seen Hagler keep his titles and remain undisputed champion.

There is no doubting that Leonard was a world-class fighter. He came to give Hagler a fight and take his titles, but he did so in such a calculating, cynical manner that it bordered on gamesmanship at the expense of actual fighting.

Harry Carpenter, the veteran BBC commentator, was at ringside when British hero Henry Cooper lost a similar, highly controversial decision to the pantomime villain, Hungarian, naturalised Briton, Joe Bugner. As a cacophonous chorus of boos cascaded around Wembley arena, Carpenter, incensed with the decision and still live on air, shouted, ‘How can you take the man’s titles like that?’

There were many, many people in Caesar’s palace and around the world now saying the same thing about the decision that gave Leonard Hagler’s middleweight crown.

Hagler immediately asked for a rematch and Leonard instead opted to retire rather than face him again. A heartbroken Hagler tired of waiting for Leonard to stand up and do the right thing, and after 14 months of getting nowhere, announced that he was retiring with immediate effect. Less than a month after Hagler’s announcement, Leonard suddenly emerged to say that he was coming out of retirement for a comeback fight. Make of that what you will.

Many experts argue Hagler did not lose this fight in the ring. They believe he lost it instead before the opening bell, during negotiations for the contest.

In exchange for a bigger purse, Hagler agreed to a bigger ring size, heavier gloves (less damaging), and 12 rounds instead of 15. The non-negotiable conditions set down by Leonard’s team were not illegal, but they favoured Leonard. However, Hagler was confident that this much-longed-for fight would be his crowning glory and firmly cement his place in boxing history, no matter which way you sliced it.

What Hagler didn’t know was that Sugar Ray Leonard also had four secret bouts under championship conditions behind closed doors, winning all four, two by KO to prepare for the fight. He was not ring-rusty after a three years layoff. He was fighting fit. And much less of an underdog than the bookies believed.

To discuss the fight in capsule form, it is widely accepted that Hagler made a mess of the opening two rounds. Ill advisedly changing to an orthodox stance from his natural southpaw. As a result, he mystified fans and pundits alike, beaten to the punch, tentative, edgy. He looked like a different fighter, slow, gun-shy and awkward.

The tide turned, however, in the third. Hagler, now back to southpaw, gets into his mean rhythm. Taking the fight to Leonard, breaking him down, being the aggressor, continually stalking, walking down and looking for his opponent.

The champion frequently pinned Sugar Ray Leonard against the ropes, outworking him, connecting with cleaner, heavier punches. Leonard was badly hurt in the fifth and the ninth.

Recognising the swing in the fight, Leonard starts to dance around the perimeter of the bigger ring repeatedly. Dancing is not boxing and several times Hagler can be heard shouting to Leonard, ‘C’mon bitch!’ Fight! Fight like a man!”

Leonard, scissoring backwards around the ring, smiled and shook his head vehemently from side to side, from several yards away. ‘Noooo’. he said, ‘Uh-uh.’

Richard Steele had to rebuke Leonard 33 times for holding, but didn’t, as he should have done, deduct a point for that many repeated and flagrant transgressions.

To give him credit, despite the punishment he took when Hagler cut the ring off and tagged him, by the championship rounds, Leonard still had strong legs. And he used them to showboating effect. Staying out of range, feinting, making faces, bolero punching, fist in the air. All illusion. Glitz and glamour, but where was the beef?

Regardless, when the decision came, the 32-year-old Hagler had lost for the first time in 11 years and was absolutely crestfallen. He would never fight again.

“When the fight was over, Hagler stayed in the locker room for a long time with his team. “They were all livid,” recalled legendary boxing reporter Ron Borges of the Boston Globe. “I remember Marvin turned to me and asked, ‘How can you lose a fight when you don’t get hit?’ What he meant was, hit in a way where there’s significant damage. The only damage done in that fight was done by Hagler.”

“Marvin felt –and I think most boxing people would agree with this – that you have to take the championship from the champion. He’s defending it, the challenger has to take it.”

At the end of the fight, during the inevitable embrace, they exchanged words in each other’s ears:’ You beat me, man,’ Hagler remembers Leonard saying. ‘You’re a really great champ,’ was what Leonard claims he said.

To this day, boxing fans and experts agree to disagree on the outcome. But for the majority, one thing is for certain: on that infamous night of April 6th 1987, despite millions of witnesses around the world, a robbery took place – the great Hagler Heist – where a golden crown left the arena on the wrong head, stolen by a pretender to the throne. 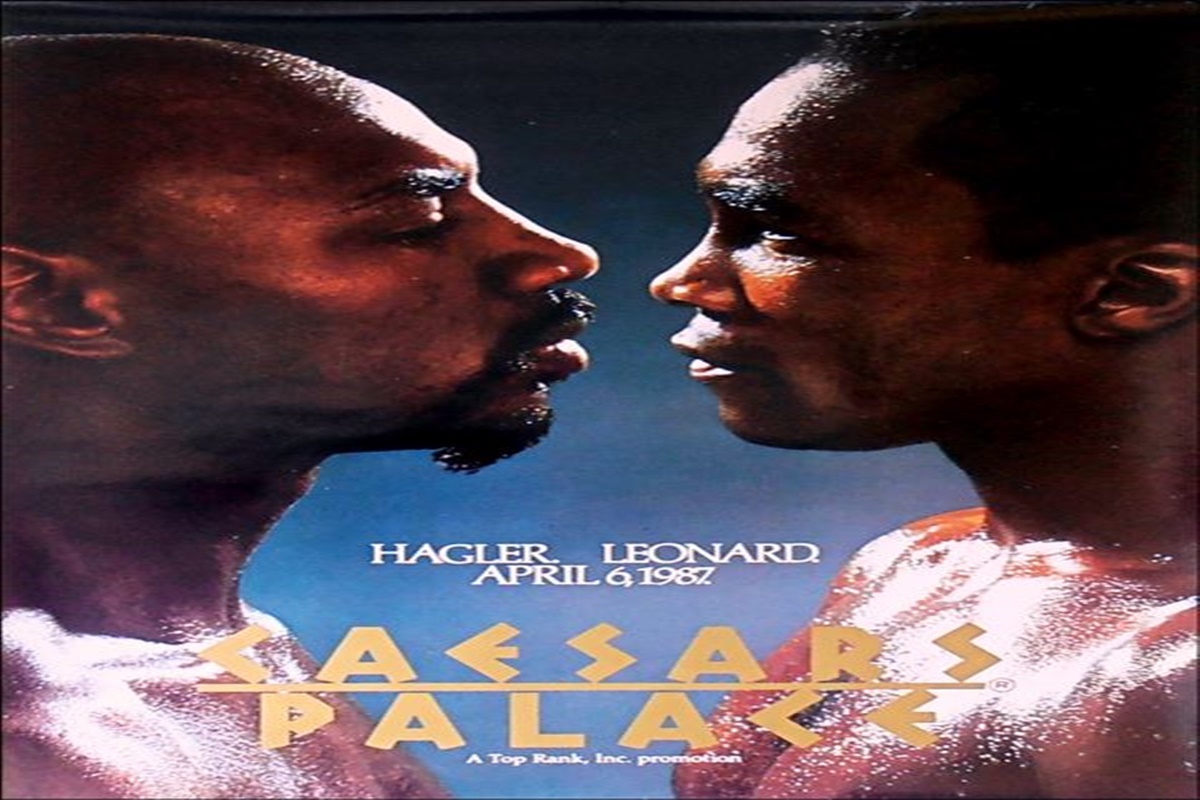