Kevin Harwick wins in Phoenix
Kevin Harvick, who started from the pole position for the first time on the 1-mile oval, scored his second consecutive victory after winning last Sunday at Las Vegas.
Kevin Harvick led 224 of 312 laps to win over Jamie McMurray, Ryan Newman and Kasey Kahne , and has seven straight top-two finishes (four wins and three seconds) going back to his 2014 championship season.
The last driver to score seven consecutive top-two finishes? Richard Petty in 1974
“The bond between this team is really special,” said Harvick. “Rodney Childers (crew chief) and myself and the engineers.
“Everybody gets along so good, it’s just — it’s almost scary, how well things are going. And you don’t want to talk about it too much because you want it to keep going. But just really proud and love these guys.”
Harvick now heads to California looking to sweep NASCAR’s three-race West Coast swing. Harvick won at Auto Club Speedway in 2011, and has been among the best drivers there since 2009.
In his first race back since being suspended Feb. 20, Harvick teammate Kurt Busch finished fifth. “The way that we raced today was with heart,” said Busch.
Tony Stewart was running in his best position all day and battling for 10th place with Justin Allgaier. But with 78 laps to go, Stewart drifted into Allgaier and spun out, hitting the Turn 4 wall.
Stewart drove to the pits for repairs but lost numerous laps. After returning to the track, he blew a tire exiting turn four and slammed into the front-stretch wall, collecting Sam Hornish Jr. on lap 290. 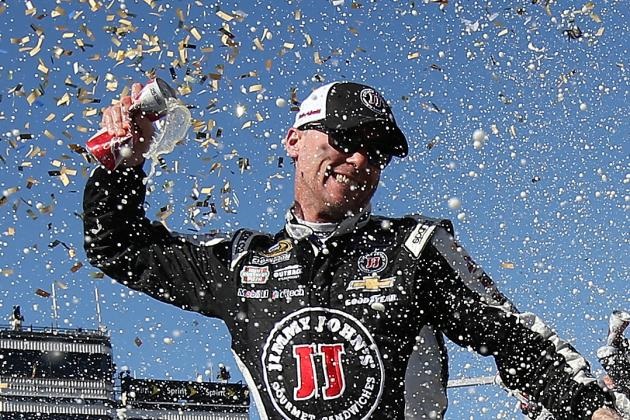