The Uefa Best Player of 2016 final three shortlist was announced on Friday 5th August 2016, and it came as a shock to the football world that no Barcelona player was on the list. The absence that garnered the spotlight was that of the reigning Ballon d’Or winner, Lionel Messi.

Messi’s absence from the list could be as a result of various reasons; his teams’ failings at the Copa America and Champions League, his least scoring league season since 2008/2009, his tax troubles, or his slightly reduced role for Barca. Last season was not his best, judging by his ridiculous standards, and his absence from the list did not deserve the attention it got.

Luis Suarez’s absence on the other hand calls into question the credibility of the award, considering the presence on the list, Gareth Bale who had no Champions League goal last season. Bale on his part had an impressive season for club and country, winning the Champions League and helping Wales to the Euros Semis, but individually he was not on the level of his first season. Injuries at key moments might have derailed his club productivity, which should have disqualified him from the award running.

With 40 league goals and 16 assists, no player was more productive than Suarez last season in Europe’s major leagues. He took some time to acclimatize in his first season only to become the real deal in his second. After the second leg El Clasico defeat no player contributed more to ensure a second straight league win than Suarez; he scored 14 goals, provided 4 assists and won four man-of-the-match awards, in the six games that followed the defeat.

Last season was not all about the goals and assists for Suarez; it was the final stage in the development of a player who sacrifices everything for his team. Gone are the days of the selfish Suarez that would rather dribble past four opponents than pass to a better positioned teammate, now we have a player who is selfless and with more tactical intelligence.

It cannot be gainsaid that the man would command a starting shirt on any team based on current form.

Ronaldo and Messi’s golden boot hegemony, which lasted six years, was ended by Suarez last season. Prior to that achievement he shared the European Golden Shoe with Ronaldo in 2013/2014 with no penalties scored.

However, a cloud of on-field indiscipline hangs over his head. It could be said that his omission from individual awards has its roots herein. Despite his wonderful showings in 2013/2014 he was snubbed by Fifa for the Ballon d’Or due to his third career biting incident at the World Cup. In the previous season, he immediately dropped out of the PFA Player of the Year award running to Bale while earning a 10 game suspension when he bit Ivanovic in a league game.

The man might have a record of imploding nonetheless he deserves a second chance by the virtue of his outstanding talent and effort. Ronaldo, Griezmann, and Bale are set to battle for the sixth edition of the Uefa Player of the Year award but Suarez can be aggrieved—rightly so—for his omission. 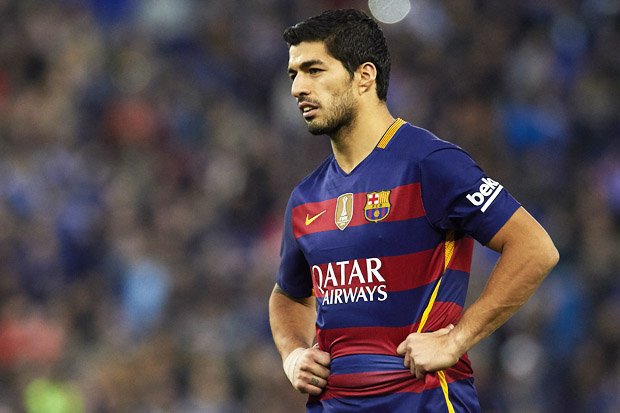