Although defenseman James Wisniewski was looking forward to having a successful new year with his new club, the Carolina Hurricanes, the veteran defenseman’s goals and aspirations for this upcoming hockey season are in jeopardy.

Ron Francis, Executive Vice President and General Manager of the Hurricanes organization has announced that Wisniewski is set to undergo surgery as a result of tearing his ACL in Thursday night’s game against the Nashville Predators. This was Carolina’s first game of the 2015-2016 professional hockey season.

James Wisniewski is expected to miss at least six months to recover from this major injury. This is a major blow for the Carolina Hurricanes organization, who planned to use Wisniewski on an every -day basis throughout the hockey season.

Originally drafted by the Chicago Blackhawks with the 156th overall pick in the 2002 NHL Entry Level Draft, the Canton, Michigan native is considered a “hockey journeyman” by playing for a vast amount of hockey organizations during his NHL tenure.

In the year 2009, Wisniewski was traded by the Chicago Blackhawks to the Anaheim Ducks. The following year, the 5 ft. 11 defenseman was traded during the 2011 NHL Entry Level Draft to the New York Islanders in exchange for a conditional third- round pick. Later in the season, the Montreal Canadians acquired Wisniewski from the Islanders. The Columbus Blue Jackets acquired Wisniewski from Montreal. After playing four years with Columbus, James began his second stint with Anaheim following a trade from Columbus. This year, the Carolina Hurricanes traded for Wisniewski in exchange for goaltender Anton Khudobin on the second day of the 2015 National Hockey League Entry Level Draft.

Wisniewski was injured in the first 45 seconds of the game, following getting hit into the boards by Predator’s forward Viktor Arvidsson. The veteran defenseman was helped off of the ice by his teammates. Wisniewski is not expected to return to playing hockey until the middle of April at the earliest. However, since the regular NHL season concludes at the beginning of April, Wisniewski would only be to return this season if Carolina clinches a playoff spot.

Danny Biega from Carolina’s AHL Affiliate, the Charlotte Checkers, has been called up by the Hurricanes to take Wisniewski’s roster spot.

Hopefully, Wisniewski returns to top form, and can be an asset to the Hurricanes organization when he returns from this devastating injury. 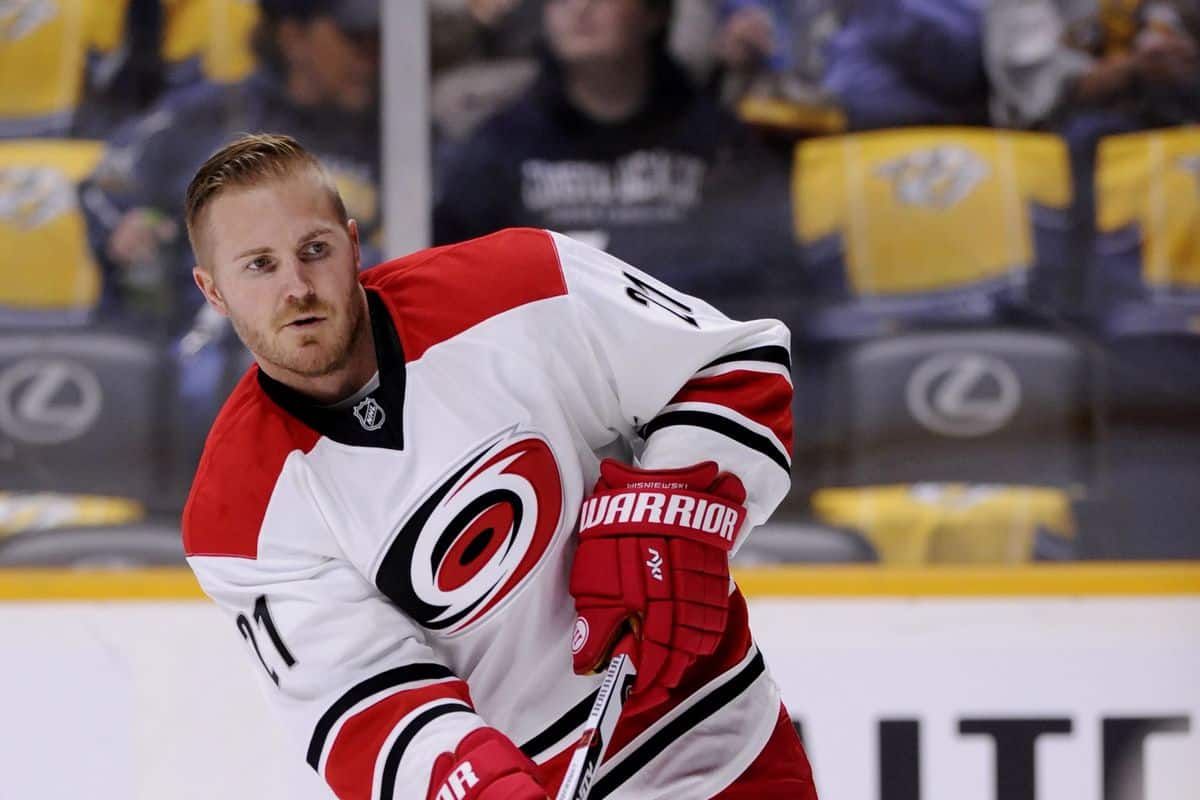