Kahne, who had a great restart in the second overtime of the Brickyard 400,crossed the yard of bricks under caution with it coming close to sundown, just ahead of Brad Keselowski and Ryan Newman.A stroke of luck ended up happening for Kahne,when on Lap 150,Kahne came to pit road just before a wreck on the frontstretch eliminated the cars of Clint Bowyer, Kurt Busch and Erik Jones.Kahne grabbed fresh tires and stayed on the track when the cars ahead of him came to pit road for tires on Lap 151.

This victory is Kahne’s first since August of 2014 in Atlanta,so it was along time coming.

“Oh, man, it’s been a while since I’ve won,” Kahne said in his post-race news conference after receiving IV fluids to combat dehydration and cramping. “I mean, you have to wonder — like, as a driver all I want to do is win, all I want to do is perform. I put the effort in each week, whether it’s at the shop, whether it’s physically, mentally, at the race shop trying to prepare, watching videos, looking through old notes, how can we be better.

“My team works really hard, as well. But we haven’t had the performance. We haven’t ran up front. We don’t lead a lot of laps. … Yeah, those things have to cross your mind. If they don’t, something would be wrong, I think.

“I think a win like today can give myself confidence and momentum, our whole team a boost, which is something that we need.”

Kyle Busch won two of three stages at the Brickyard 400 and led a race-high 87 laps,but it ended up finishing in disaster for the 18. On a restart with 49 laps remaining,Truex lined up in the inside lane and Busch to his outside, the two raced hard into Turn 2. As they did, Truex got loose and slid up the track causing both their Toyotas to slam into the outside wall, ending in massive damage to both cars,finishing off both of their days.

The series will hit Pocono Raceway this weekend. 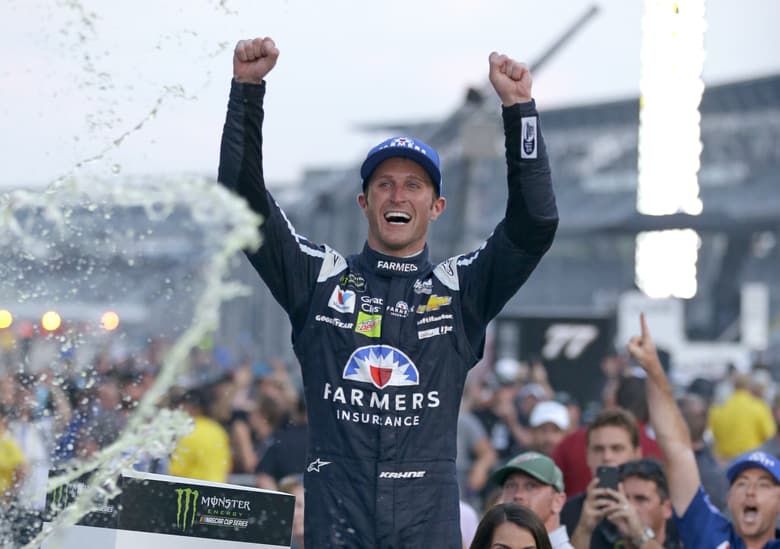