There are some moments in the world of sports that transcend the event, and speak to society at large. The dedication of the athletes, the venue in which the event takes place, the energy of the audience in attendance, and the significance of the moment outweigh the final score and are much bigger than the final outcome.

A sporting event of enormous cultural magnitude took place on Saturday, April 30th, and those of us who call ourselves sportsmen should take note, observe, pay attention and learn the lesson we were all taught. Katie Taylor and Amanda Serrano climbed in the ring and put on a thrilling 10-round fight for the ages. The impact of this moment will reverberate for years…

In the mid 90’s, a female boxer by the name of Christy Martin garnered the attention of the sports world. Although Martin was an excellent performer inside the ring, a big portion of the media coverage surrounding her focused on the fact that she was being promoted by Don King.

As a result of this, she was famously placed on the undercard of the Mike Tyson versus Bruce Seldon heavyweight championship bout. The buildup to the fight resulted in the most media coverage in the history of women’s boxing. However, Martin was the intriguing sideshow, not the main attraction. It would be years before a female pugilist was given honest coverage based on her own merits…

Outside of Billie Jean King and Martina Navratilova, who both rose to stardom as tennis players in the 1980s, women’s sports historically received far less coverage than those of their male counterparts. When American gymnast Mary Lou Retton took home the gold medal at the 1984 Olympics in Los Angeles, she found herself on the cover of a Wheaties box, with no avenue to continue her professional career as an athlete.

Through the years, there would inevitably be improvements in the coverage of women’s sports, but very few elite female athletes have been celebrated for their excellence to the same degree as their male counterparts…

Going against the grain

One of the reasons routinely given for the lack of media coverage for women’s sports has been the lack of enthusiasm from the viewing public. Due to this logic, women’s sporting events have often been held in small venues, television coverage has been less extensive, and the lack of promotion has led to under-capacity crowds and disappointing ticket sales. In order to challenge the status quo, it takes a bold determination and a rejection of flawed thinking patterns.

A new approach must be taken that embraces the idea of a fair chance for elite athletes to display their skills. However, with his daring move to place a women’s boxing match as the headliner at Madison Square Garden in New York City, Eddie Hearn proved that he is not just a man of the times, he is a bold innovator and a very savvy businessman.

There are very few places in the annuls of sports as revered as Madison Square Garden. As Frank Sinatra once bellowed “If you can make it there, you’ll make it anywhere…” Over the years, the venue has been home to some of the most significant events in the history of sports. Ali-Frazier-I was held there in 1971, Willis Reed’s infamous walk through the tunnel to the surprise of the fans took place at MSG in 1970, and a sold-out arena honored Sugar Ray Robinson at his retirement ceremony in 1965.

The opportunity to perform at Madison Square Garden is an honor for any entertainer; to be selected to headline an event there means you’ve truly arrived.

Katie Taylor and Amanda Serrano didn’t just perform at the hallowed venue on Saturday, they did so in front of a sold-out crowd that screamed at the top of their lungs from start to finish. Each woman had an epic ring walk, during which their adoring fans yelled in support and hailed their national flags. Serrano is a proud Puerto Rican who came to the mainland United States as a toddler and was raised in New York City.

Katie Taylor is a proud Irishman who disguised herself as a boy due to Ireland’s ban on women’s boxing when she was a child. It is from these humble beginnings that these two warriors clawed their way to the top and landed on the world’s biggest stage, at the same place, at the same time.

Make no mistake about it, Saturday was much more than a symbolic cultural statement about the State of Affairs in women’s sports. Katie Taylor and Amanda Serrano are both two well-oiled machines who invoke fear in the hearts of their opponents.

Going into the bout Taylor was undefeated while Serrano had tasted defeat just once in her career. These were the two best women in the lightweight division, and the moniker of undisputed champion was up for grabs this night.

The fight itself was a slugfest; the debate about who actually won is ongoing even two days after the final bell rung. My older brother, Marcus, says Serrano should have been declared the winner. My Uncle Juke Box says Katie Taylor controlled more rounds of the fight and deserved to have her hand raised by the referee.

Even Serrano herself said she was not sure if she won or lost the bout, stating she would have to watch the fight on film before being able to make a determination. Ultimately, Katie Taylor was awarded a split decision victory by the judges. But on a night this momentous, there are no losers, only winners.

Moving forward, female athletes who deserve to be headliners should be given that chance. Taylor versus Serrano was a momentous night because Eddie Hearn and Matchroom Sport accurately evaluated the star power of two elite boxers.

Those fighters happened to be women, but the ticket sales and the television views give way to the fact that well-prepared, determined warriors are capable of putting on a show worth watching regardless of their gender.

Katie Taylor and Amanda Serrano were the first two women fighters to headline a show of this magnitude; because of the brilliant manner in which they conducted themselves, they certainly won’t be the last. 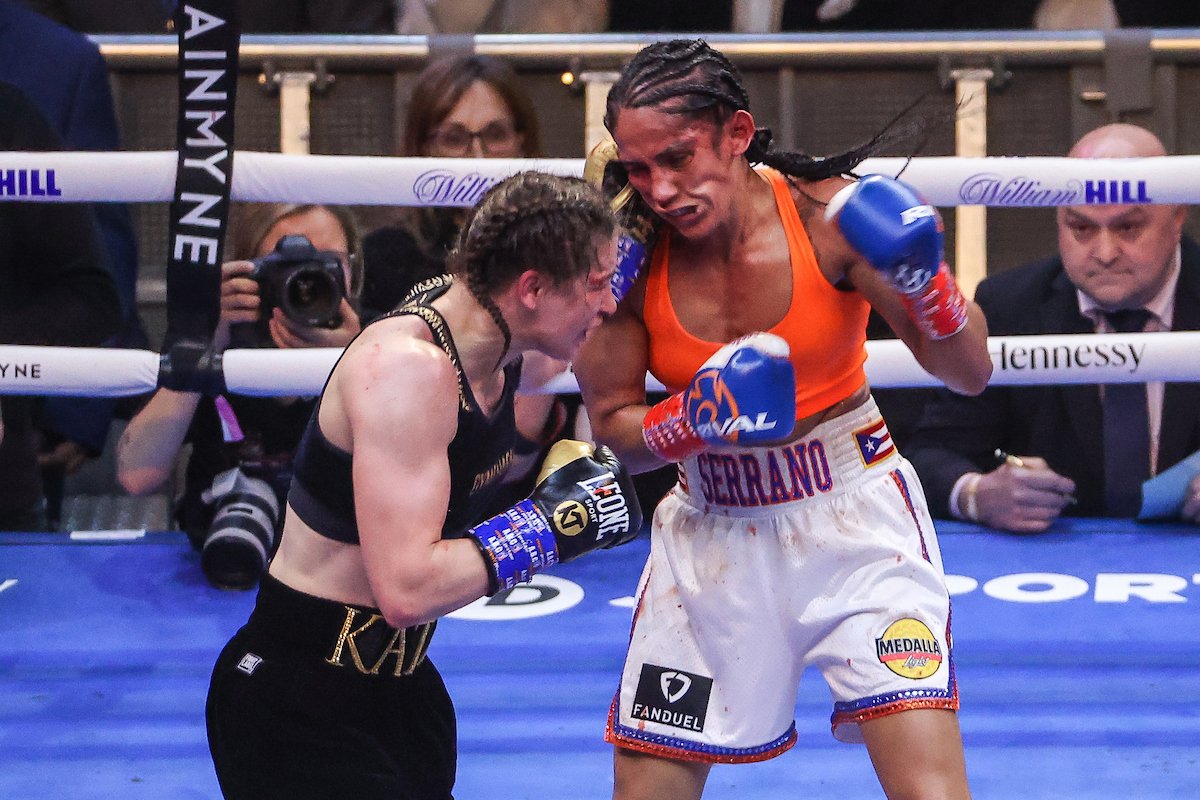