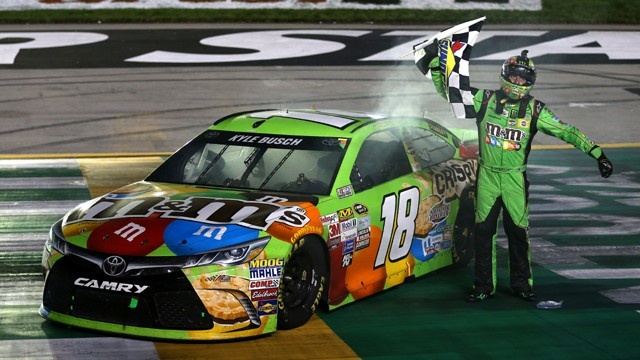 Busch outdueled Joey Logano late to win the Sprint Cup Series race at Kentucky Speedway, moving a little closer to making the 10-race championship playoff. Busch controlled much of the 400-mile race, leading 163 of 267 laps after starting ninth for his second victory here in five starts.

But he had to shake off Joey Logano during one late run in which they traded leads for several laps. Busch finally got the upper hand on Lap 248 and never looked back,closing out his second victory in three races after missing the first 11 events due to leg and foot injuries sustained in February at Daytona.

It is his second career Kentucky victory. With the victory, Busch became the fifth driver this season to win multiple races, joining Jimmie Johnson, Kurt Busch, Kevin Harvick and Dale Earnhardt Jr. Kyle still must race his way into the top 30 in points to qualify for the Chase for the NASCAR Sprint Cup.

“He got away from me and I was nervous [that] I wasn’t going to be able to get back to him,” Busch said, “but I knew to just try something different to go get him.”

Earnhardt Jr., who had fought brake issues all night, tapped Danica Patrick on Lap 206, causing a record-tying 10th caution. This time, Hamlin won the race off pit road over teammates Busch and Edwards, with Keselowski sixth.
Dale Earnhardt Jr. accepted responsibility for spinning Danica Patrick out in Saturday night’s NASCAR race at Kentucky, but said the contact was accidental and certainly not intentional.

has published a new post."The Merry Old Land of Woz"
12 hours ago

has published a new post."Five Takeaways From the Heat-Clippers Game"
12 hours ago
View more activity