Michael Carrick made it three games unbeaten in charge of Manchester United as the incoming boss, Ralph Rangnick, watched United’s 3-2 win over Arsenal from the stands. Moments later, the former Reds midfielder announced that he was leaving the club after 15 years as a player, coach, and manager to spend more time with his family.

Having overseen the 2-1 Europa League victory over Villareal and the 1-1 draw against Chelsea at Stamford Bridge at the weekend, Carrick continued his successful cameo as interim United boss with a sign-off win against a lively Arsenal side who had more than a touch of Arsene Wenger’s DNA about them, with their energy and intricate quick passing in front of a full house at Old Trafford.

This fixture between two great Premiership rivals has thrown up many controversies over the years, with Pizzagate, the bullying of Ruud van Nistelrooy, the Ferguson-Wenger spats, the mass brawls. And last night provided another to the list with a bizarre incident, the like of which has not been seen before in the history of the Premier League, as Mikel Arteta’s team scored the opening goal.

Arsenal had three corners in the first ninety seconds as they took the game to the home side in a dominant opening spell with a vibrant midfield of the all-action trio of Thomas Partey, Gabriel Martinell, and Martin Odegaard particularly effective.

Their fourth corner, on 13 minutes, proved unlucky for Manchester United.

Martinelli swung the corner over from the right-hand side, David de Gea came to collect the ball but had his foot trodden on by teammate Fred, and collapsed in agony.

As De Gea lay prone on the ground, the ball looped up to Emile Smith-Rowe on the edge of the 18-yard area and he promptly volleyed the ball into the unguarded net. There was a tense delay as referee Martin Atkinson waited for the United goalkeeper to receive treatment. And once De Gea was back on his feet, promptly awarded a goal to Arsenal. Cue uproar, as United players fuelled with indignation and accusations of unsporting behaviour protested the decision.

Within the laws of the game, the goal was good, but Smith-Rowe is no Paolo Di Canio, and there was no Marco Bielsa on hand, and so United players let the chubby-cheeked Arsenal man know in no uncertain terms what they thought of him. Their reward was a shrug, an open-handed gesture, and a sheepish grin, which did nothing to endear him to anyone in a red shirt.

Roared on by the United faithful now chanting ‘same old Arsenal, always cheating’ and seeking Natural justice, Manchester United upped their game, pushing the play further up the pitch. Arsenal’s early dominance waned, and they began to sit back deeper and deeper, inviting United forward. And just before halftime, the invitation was accepted.

A sparkling move of one-touch football saw Maguire feed Sancho on the right. The winger picked out Fred’s run into the box. And the Brazilian cut the ball back for Bruno Fernandes, who made no mistake from six yards for the equaliser.

Manchester United came out for the second half with a renewed sense of purpose. And in the 50th minute, they turned the game around as a superb reverse pass from Diogo Dalot found Marcus Rashford in space on the right. His first-time cross was met by Cristiano Ronaldo who fired in his 800th goal for club and country to spark scenes of wild celebration.

Less than two minutes later, those celebrations were choked off in mid-flight, as Arsenal drew level. A thrilling counter-attack by the away side saw Thomas Partey’s 30-yard pass find Martinell unmarked on the right-wing. His cross into the box was swept home imperiously by Martin Odegaard, the second ex-Real Madrid man to score on the night, and Arsenal had a sumptuous equalizer in a game that increasingly had the feel of a cup tie.

A quarter of an hour later, however, Odegaard had gone from hero to villain.

In the 67th minute, Fred’s forward run into the Arsenal area was tracked by Odegaard, but the young midfielder put in a rush of blood challenge which sent the United man sprawling inside the box. Inexplicably, referee Martin Atkinson waved away appeals for a blatant and obvious foul, but was rightly corrected by VAR after a review and a 3-minute delay. Penalty to United.

Ronald stepped up, sent his penalty kick high into the middle of the net in front of the Stretford End to complete a breathtaking turnaround and notch up his 801st into the bargain.

Arsenal responded by sending on Lacazette and Saka, who had two good chances to score, for the final twenty minutes, but Manchester United’s much-maligned defence stood firm, as the home side saw out the remainder of the match, including a tense and nervy five minutes of injury time, to get the win.

The match was a fitting epitaph and emotional fairy tale ending then for long-standing servant Michael Carrick. It was also Ralf Rangnick’s first chance to soak up the atmosphere at Old Trafford, and get a feel for the size of the task in front of him. But it was Cristiano Ronaldo who grabbed the headlines as the United legend continued to defy gravity and time with a man-of-the-match display. And a staggering goal milestone in this pulsating match between two Premiership giants who continue to write controversy and classic football history into the pages of their great rivalry. 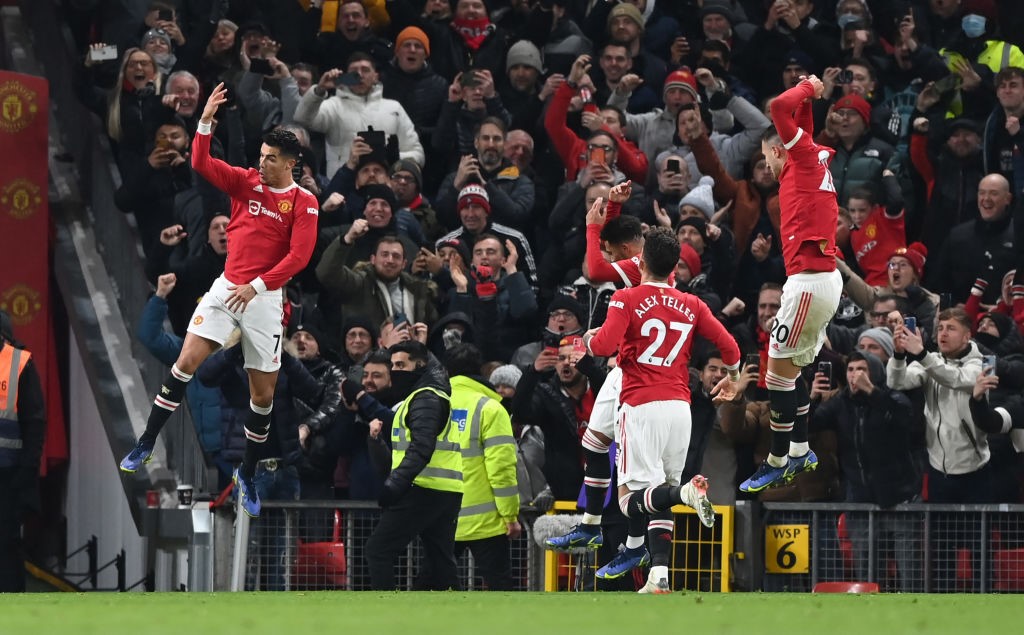