Saturday’s County Championship action saw career-best figures for left-arm spinner Dan Morianty for Surrey against Gloucestershire, plenty of wickets for Dillon Pennington, a century in the Roses game as well as a victory for Essex at Cheltenham.

Resuming on 263/8, the hosts would add 22 this morning before Sam Cook was out LBW to Raine for 22 before Jamie Porter was bowled by the same bowler for 0, leaving Simon Harmer 47 not out, and the hosts 301 all out.

Requiring 385 to win, Durham would lose Cameron Bancroft in the third over of the chase as he was bowled by Porter for 4 before Scott Borthwick was LBW to Cook for 29. Alex Lees was next man out as Nick Browne took the catch off Ryan ten Doeschate’s bowling before Michael Jones would also fall LBW to Cook for 35. Jack Burnham would be LBW to Peter Siddle before the same bowler would bowl Ned Eckersley for 6. Brydon Carse and David Bedingham would both be bowled for 7 and 32 respectively in a 3-ball Porter spell before Ben Raine would be caught behind off Siddle for 2 and Matty Potts last man out, bowled by Porter, for 11 as Essex won easily.

Resuming on 173/3, the visitors would score 4 more before Lyndon James would be bowled by Craig Miles for 4 with Joe Clarke the next wicket to fall as he went LBW to Tim Bresnan for 61. Steven Mullaney would be bowled by Danny Briggs for 28 before Tom Moores would be caught & bowled by Will Rhodes for 13. Zak Chappell would be caught by Lamb off the bowling of Liam Norwell for 12 before Luke Fletcher was caught behind by Michael Burgess off Rhodes for 2. Liam Patterson-White was the last man out for 36, caught behind off Rhodes, with Dane Paterson not out for 8.

Warwickshire would get off to a good start in their second innings with Rhodes and Rob Yates making 76 for the opening partnership before the latter was bowled by Patterson-White for 26 before Pieter Malan would be caught by him off the bowling of Chappell. Chappell would also take the next couple of wickets, first Sam Hain would be caught by Moores for 5 before Rhodes would be bowled for 63. Fletcher would get the final two wickets of the day. first Matthew Lamb LBW for 7 before Bresnan was caught behind for 0 with Burgess and Briggs not out for 61 and 16 respectively.

Resuming on 91/3, they would add 18 before Ben McDermott would be caught by Daryl Mitchell off the bowling of Dillon Pennington for 25 with Wayne Madsen also caught by the same man off the bowling of Ed Barnard for 51. Fynn Hudson-Prentice would be the sixth man out, caught Jack Haynes off the bowling of Worcester captain Joe Leach for 25 before Alex Hughes would also be out for 25, caught out by Ben Cox off Pennington. Ben Aitchison would be LBW to Alzarri Joseph for 1 before the West Indian bowler would bowl Samuel Conners for 4. Dustin Melton would be last man out, caught by Tom Fell off Pennington, for 5 with Matt Critchley 81 not out and Leach enforcing the follow-on.

Resuming on 57/1, the score would move onto 84 before Stevie Eskinazi would be the first to fall as he was bowled for 46 by Wright with Nick Gubbins also bowled, this time by Ben Mike, for 38. Robbie White would be bowled by Davis for 10 before John Simpson would be caught by Evans off the bowling of Wright. He would also get Martin Andersson LBW for 4 before Peter Handscomb would fall the next over to Mike, caught behind by Harry Swindells for 36. Tom Helm would be bowled by Wright for 1 before Ethan Bamber would be LBW to Callum Parkinson for 8. Luke Hollman would be the last man, caught out by Colin Ackermann off the bowling of Wright, for 26.

Chasing a target of 378, Leicestershire would lose Hassad Azad for 1 as he was caught by Walallawita off the bowling of Bamber with Sam Evans and Marcus Harris getting 26 and 41 respectively by close.

Resuming on 45/1, Kraigg Brathwaite and Miles Hammond would move the score onto 84 before the West Indian opener would fall LBW to Amar Virdi for 38 with Tom Lace dismissed the following over, caught Clarke off the bowling of Dan Moriarty, without scoring. Ian Cockbain (caught Sean Abbott, bowled Virdi) and Ryan Higgins (bowled Moriarty) were dismissed for 1 and 0 respectively – the score going from 84/1 to 89/5.

Jonny Tattersall would be the sixth man out as he was caught by Jamie Overton off the bowling of Moriarty before the left-armed spinner would also get Tom Smith caught out by Jacks for 2. Matt Taylor would be bowled by Jacks for 12 before Moriarty would get the final 2 wickets, firstly bowling David Payne for 1 then having Hammond caught by Overton for 77.

Following on, the visitors would lose Brathwaite, caught and bowled by Overton for 28 before captain Chris Dent LBW to Sean Abbott for 14. Lace would be bowled by Abbott without scoring before Cockbain was out the same way to Virdi for 6. Higgins was the last man out in the day’s play as he was stumped by Jamie Smith off the bowling of Virdi for 11 leaving Hammond (38) and Tattersall (15) the not out batsmen at close.

Resuming on 350/6, Josh Bohannon and Danny Lamb would add 140 to the overnight score for the hosts before the latter was caught by Steven Patterson off the bowling of Jordan Thompson for 61 with Tom Bailey bowled by Hill for 12. Saqib Mahmood was the last man out for Lancs, ran out by Hill for 0, as Dane Vilas declared on 509/9 with Bohannon finishing on 127 not out.

Adam Lyth and Tom Kohler-Cadmore would put on 72 for the opening partnership before the former England international was caught by Wells off the bowling of Matt Parkinson for 39 with the latter also going in the penultimate over of the day, falling LBW to Mahmood for 32, with Will Fraine (6) and night-watchman Patterson (2) the unbeaten batsmen at stumps.

Resuming on 142/4, the hosts would move onto 209 before losing Tom Haines was caught by Tom Taylor off the bowling of Simon Kerrigan for 103 with Delray Rawlins next out for 15 as he was bowled by Taylor. George Garton would be caught out by Ricardo Vasconcelos the very next ball before Ben Brown and Jack Carson would add 65 for the eighth wicket, Carson getting out for 35 LBW to Kerrigan. The final 2 wickets would happen on consecutive balls, first Henry Crocombe would be LBW to Taylor for 0 before Brown was caught by Luke Procter off the bowling of Kerrigan.

Chasing a target of 218, Northants would lose Ben Curran for 10, caught Brown off the bowling of Jamie Atkins as well as fellow opening Vasconcelos for 38 (run out Haines) before close with Procter (47) and Rob Keogh (24) unbeaten as they require 87 more runs on the final day. 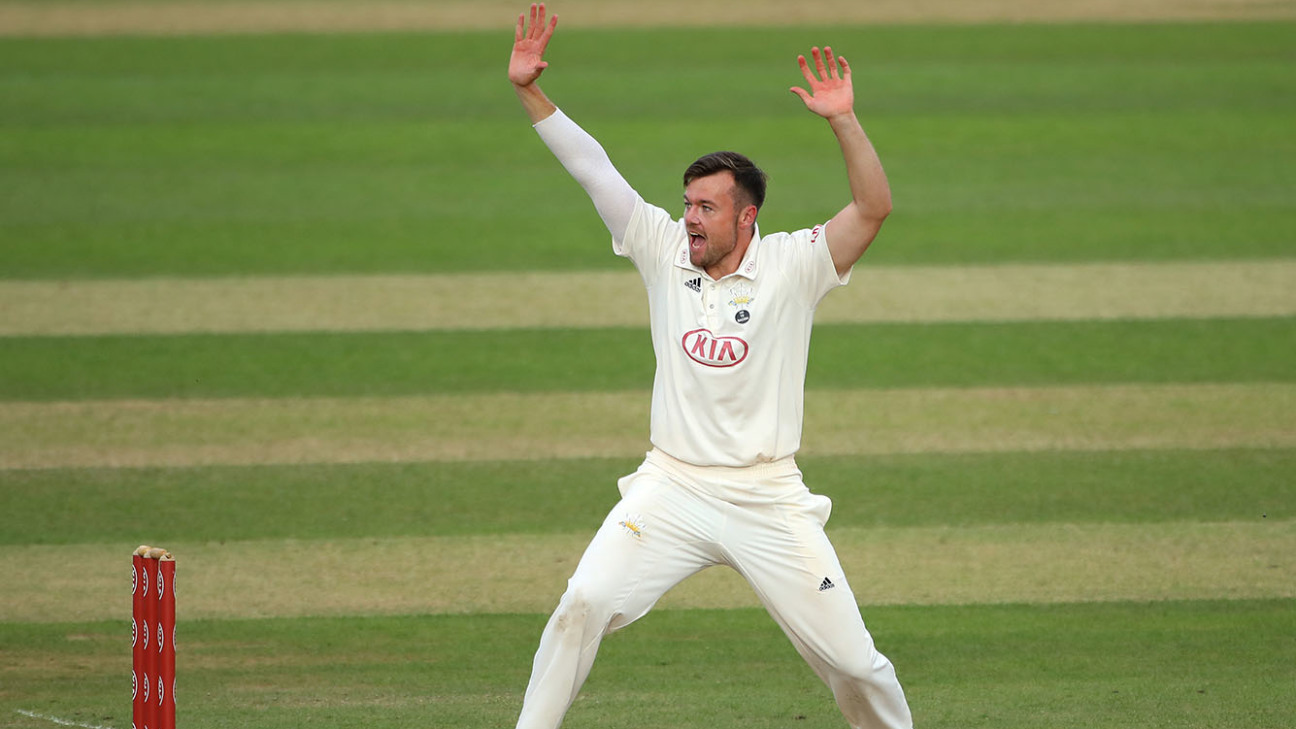