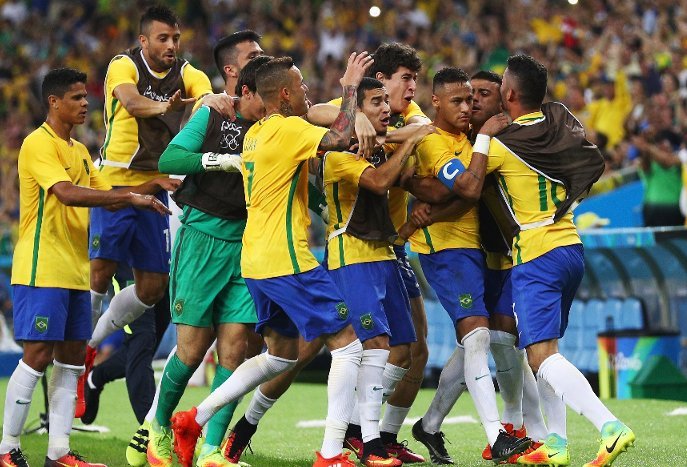 The 2016 Olympic Men’s Football (Soccer) Tournament concluded in dramatic yet fitting fashion earlier today. The stage was set for Brasil and Germany at the legendary Maracanã Stadium, and the ensuing match didn’t disappoint.

The first 45 minutes were filled with shots hitting the crossbar, three in total. The finest of them came from Neymar off of a free kick, deflecting off the bottom of the bar and into the goal. Coming out of halftime the Brasilians were confident in their play and were boosted in no small part by the crowd.

A German cross led to a fantastic first-touch finish by Schalke’s Max Meyer, silencing the crowd and leveling the score.

The remainder of regular time was tense for the Germans as Brasil took chance after chance at the goal, but the hosts failed to produce more than a few narrow misses and a claim for a penalty (rightfully not awarded). Extra time was uneventful as usual, and the match was set to go to penalties.

The first four takers for each side succeeded in scoring, and as Die Mannschaft’s fifth taker, Nils Petersen, stepped up to the spot it became evident that someone would have to miss at some point in the shootout, it was simply a matter of who and when.

Viewers did not have to wait long, as Brasilian keeper Weverton saved Peterson’s attempt. The hero of Brasil’s tournament and the pride of Brasil then stepped forward with the chance to bring gold to his country for the first time.

Neymar made no mistake in his penalty, scoring easily to the keeper’s left, and the entire country of Brasil went crazy. After more than enough bronze and silver medals in tournaments past, Neymar finally gave the host country what they so desperately craved; gold.

In the sparsely attended bronze medal match two non-traditional powerhouses battled it out it Belo Horizonte. Nigeria took a three-nil lead and held on through a Honduran rally, winning 3-2.