Before we get into Day Nine’s action, some news regarding a certain Aussie men’s tennis player. Wimbledon quarter-finalist Nick Kyrgios is set to appear in court in Australia next month in relation to an allegation of common assault. Police said it follows an incident in December last year which Kyrgios’ barrister says was “in the context of a domestic relationship”.

Kyrgios is now scheduled to appear in the Australia Capital Territory (ACT) Magistrates’ Court on 2 August. He will play Chile’s Cristian Garin in the Wimbledon last eight on Wednesday, but this certainly casts a shadow over him and this game, hopefully, this does not detract from it and doesn’t affect him too much, but it seems controversy follows this man around.

Anyway, back to tennis, and Cameron Norrie was bidding to become the first British man to reach the Wimbledon semi-finals since 2016 when he took on the unseeded David Goffin on Tuesday’s second match on Court One. Norrie was the last Brit left in the draw after he beat American Tommy Paul 6-4 7-5 6-4 to reach his maiden Grand Slam quarter-final on Sunday, whilst Goffin had to come through a marathon five-setter against Frances Tiafoe on the same day, how would his body hold up after such a lengthy match?

It didn’t seem to be affecting him at all early on, the Belgian has reached three-Quarter Finals here before, whereas Norrie was in his first-ever one, and the first set certainly showed this as a messy and tight Norrie lost the opening set 6-3, advantage Goffin, how could the British No.1 cope with this adversity, he would need to dig deep to get back into this contest.

Well dig deep he did, and what followed was a superb five-setter, Norrie taking the second set 7-5, but Goffin came right back at the Brit and managed to take the third 6-2, meaning Norrie had to win the next two sets to continue his run at these championships.

Norrie responded to take the fourth set 6-3, setting up a decider, and at 5-5 Norrie broke the Belgian and incredibly led for the first time in the contest, and Norrie managed to serve it out and win a titanic tussle against the amazing Belgian. What a match and Wimbledon had a British man back in the semi-finals once again!!!

On Centre Court, Novak Djokovic played Jannik Sinner in the last eight before third seed Ons Jabeur took on world number 66 Marie Bouzkova. Novak looked to be sailing to a one-set lead as he was a break and 4-1 up in the first set, but the young Italian found his feet and broke back and then broke the Serb again to serve for the set at 6-5, and he duly did that and from nowhere the 10th seed was a set to the good, shock on perhaps?

Sinner was playing like the one who had years of grass experience, and he broke the Serb again in the second set before going on to take two sets to love to lead with a comprehensive 6-2 second set win, and the defending champion and number one seed was now in a right pickle, his opponent was playing some remarkable tennis considering the occasion, and the Serb’s twenty-five match winning streak at SW19 was now seriously under threat.

But being the champion Novak is of course you expected some sort of response, he wasn’t going to lose this one in straight sets after all, and after he managed to break the Sinner serve in game four of the third set, he went onto serve it out 6-3 and take the match into a fourth set, this was now going to be a real test of Sinner’s nerve that was for sure, could he cope with the pressure of a comeback from the Serb?

Novak was now into his grove and blasted into a 4-0 lead in the third set, momentum was all with the No.1 seed, Sinner was seeing more and more errors creep into his game whereas Novak was playing his best tennis of the game, and the Serb saw out the fourth 6-2, setting up a decider, and surely there would only be one winner now?

Sure enough, the Serb managed to breeze through the decider to take that 6-2, amazing that Sinner only won seven more games after going two sets up, Novak is a champion for a reason and he sure showed those qualities today, however, the young Italian has one hell of a bright future if this performance is anything to go by. Djokovic now takes on Norrie in the semi-finals, oooooh.

And what of Jabeur, well the third seed dropped the opening set against Bouzkova and it looked like the Czech might surprise the Tunisian, but Jabeur isn’t one of the favourites for nothing and responded in devastating fashion, winning the next two sets dropping only two games to take the match and reach the semi-finals.

Her opponent in that Last Four showdown would come from the other game on court one involving Tatjana Maria, who faced Jule Niemeier as she aimed to continue her fairytale run. The 34-year-old world number 103 was the oldest player left in the women’s draw, and she played the 22-year-old Niemeier – who beat Heather Watson in the fourth round – and it was an advantage youngster initially as after Niemeier broke her opponent in the very first game of the match, she held serve all the way through that set to take it 6-4.

And when Niemeier broke again at the start of the second set, you felt that could be that, but the 34-year-old mother of two then broke back twice and saw out the second set 6-2 to set up a decider.

Both held their serve for the opening four games of the final set, but Niemeier then broke and then led 4-2, but Maria then reeled off three straight games to get back on serve and then at 6-5 broke the German to take the match in three sets and continue her remarkable story at this year’s championships. World No.103 was in the semi-finals, this after only returning to the game last July following a second child, remarkable!!!

There was plenty of action on the outside courts, including women’s doubles action as Nicole Melichar-Martinez and Ellen Perez faced Barbora Krejcikova and Katerina Siniakova.

Czech pair Krejcikova and Siniakova were the number two seeds and one of the best doubles pairings in the world, but they were blown away by tenth seeds Melichar-Martinez and Perez in just over twenty minutes in the first set 6-1, nobody saw that coming, but the Czechs managed to fight from a break down in the second to take it to a tie-break, which they won, to level the match up.

And the Czechs completed the comeback by whistling through the final set in just over half an hour to win it 6-2 and take their place in the Semi-Finals of the Ladies Doubles draw, an amazing turnaround as their opponents were in total control at a set and a breakup, but these Czechs just don’t know when they are beaten, and this was a superb win for them as they keep their Wimbledon title hopes alive.

After them, on Court Two came a Men’s Invitation Doubles Match which saw American James Blake and Canadian Daniel Nestor take on the pairing of German Tommy Haas and Aussie Mark Philippoussis, and it was the pairing of Haas and Philippoussis who prevailed in straight sets to win their opening round-robin match.

Laura Robson, remember her, Wimbledon junior champion fourteen years ago at the age of just 14? Well, she was taking part in a Ladies Invitation Doubles match alongside Slovakian Daniela Hantuchova, and they managed to defeat Aussie double pairing Casey Dellacqua and Alicia Molik in straight sets, it’s nice to see Robson competing again after retiring at the age of 28, she was certainly all smiles on Court No.3.

It’s great to see these former champions taking part at SW19 once again, and these Invitation Doubles tournaments are a great way to see these now-retired former tour stars playing once again it what is a light-hearted but competitive environment and reminds us all of a certain age how much we loved watching these players compete at the top level a decade or two on.

Anyway, for all other doubles and Junior results, and also tomorrow’s order of play, please visit https://www.wimbledon.com/en_GB/scores/schedule/index.html as that concludes Day Nine’s action, the remaining singles Quarter Finals take place on Day Ten, I’ll be back with that review tomorrow… 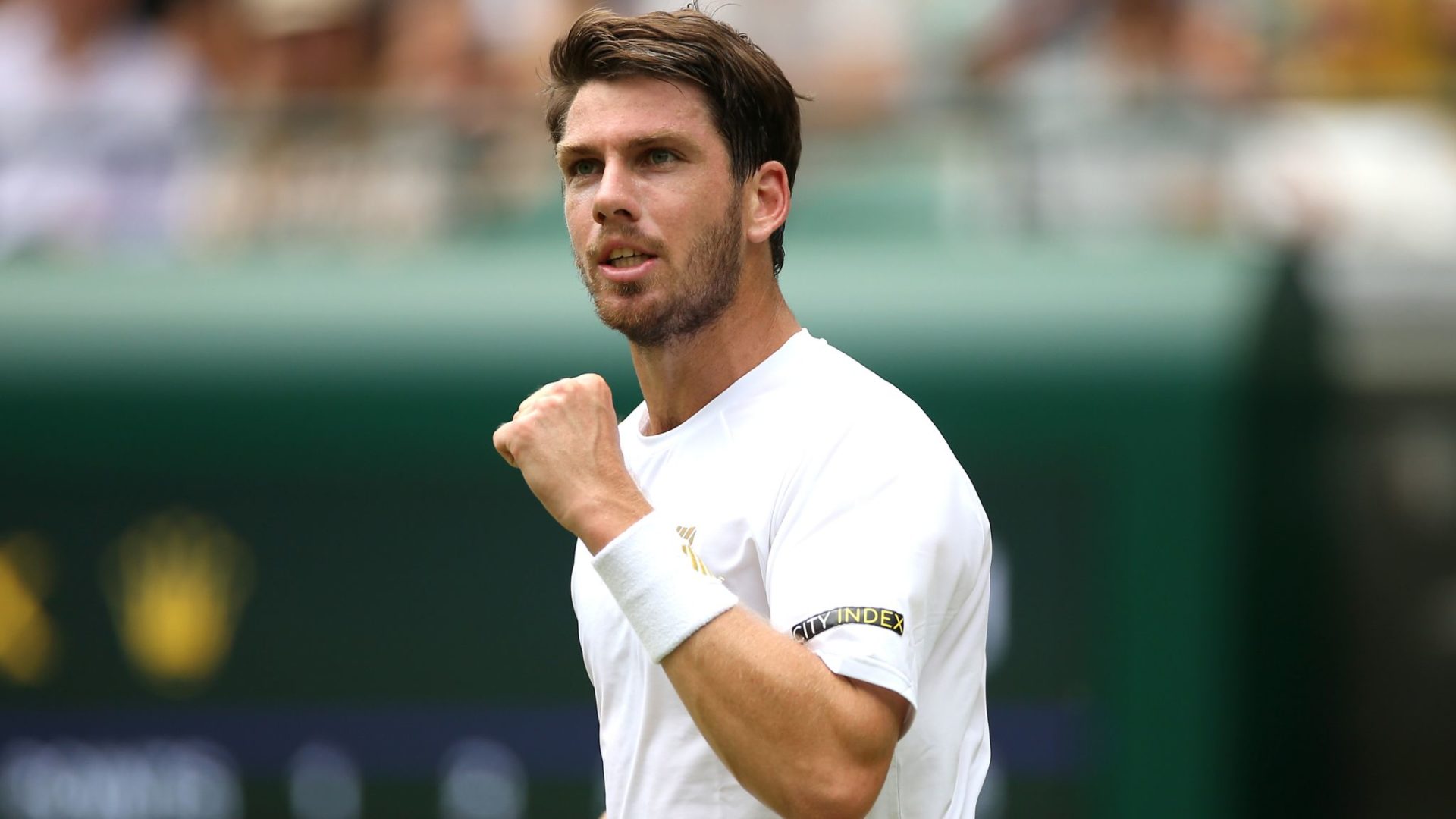