Monday and Tuesday saw two games take place in the Premier League, Monday evening saw the A23 derby at The Amex to complete the latest weekend of action, and then Tuesday saw the rearranged Leeds against Southampton contest that was due to be played five weeks ago, let’s see how those went…

If you look up ‘smash and grab’ or daylight robbery’ in the dictionary, then this Palace win at The Amex against their bitter rivals would certainly appear after Christian Benteke’s stoppage-time volley handed Palace a rather fortunate victory against a Brighton side who had completely dominated the game.

The Seagulls had twenty-five shots on goal during the contest, but their wastefulness in front of goal came back to haunt them as they ended up making absolutely nothing from the contest, they should have won by quite a bit. They were the better side when Palace took the lead just before the half-hour mark after Jean-Philippe Mateta had brilliantly back-heeled a Jordan Ayew cross past Robert Sanchez, but when Joel Veltman swept home the hosts’ leveller ten minutes after the break, you felt there would be one winner.

Brighton knocked and knocked on the Palace door time and time again but found the visitors defence and keeper Vincente Guaita impossible to pass with players throwing their bodies in front of shots time and time again to block efforts from the hosts, and it looked like Brighton would have to settle for a point.

But in the 95th minute cam the dramatic moment that saw Palace net a winner when Benteke brilliantly volleyed home an Andros Townsend cross beyond Sanchez with pretty much the final kick of the game, and see The Eagles win a rare contest with the services of Wilfred Zaha, who was still out injured.

It was a huge win for Palace, whilst for Brighton they will wonder how it was even possible to lose a game they completely dominated, but if you do not take your chances then you will not win games, it’s as simple as that, Palace had two touches in the Seagulls box in the entire game, and both of those resulted in goals, so you could say the visitors were clinical.

A man of the match performance from Raphinha helped Leeds see off The Saints at Elland Road to take themselves back into the top ten of the division as Marcelo Bielsa’s men netted three second-half goals to net an important win for the hosts.

Nothing seems to be going right for Ralph Hassenhutl’s men right now, this was the seventh defeat in eight although they could easily have been two up inside ten minutes as they certainly began this game in the front foot and were actually playing Leeds at their own high pressing game, and they thought they had won a penalty when Nathan Tella looked to have been tripped inside the box by Diego Llorente, but this was rightly overturned by VAR and referee Andre Mariner after Tella had actually instigated the contact and tried to win a penalty.

And then just before half time the Saints thought they had caught Leeds out with a quickly taken free-kick by James Ward-Prowse that found Che Adams free inside the box, and he struck home but referee Mariner said he had not blown his whistle so wasn’t ready for the free-kick to be taken, so brought playback, much to the disgust of the visitors, but it was the right call as the whistle didn’t go until just after the free-kick was taken.

And two minutes after the restart Leeds edged in front as a nice pass from Tyler Roberts saw Patrick Bamford glide in between two defenders before hitting a lovely finish beyond Alex McCarthy into the bottom corner, and then with twelve minutes remaining lovely work off the ball by Raphinha allowed Stuart Dallas to run into the space provided to apply a neat finish with the outside of his boot to double the hosts advantage.

And then with six minutes left Leeds sealed the contest once and for all when Raphinha capped a wonderful second-half performance by netting a superb free-kick, although McCarthy may feel he should have done better in saving it, it was a very important win for the hosts who had lost three of their last four, but this win took them back above Arsenal and Wolves into tenth place, and five points behind the top six.

For The Saints, they didn’t play that badly and 3-0 probably is a bit harsh on them, but this is how it is going for them right now, and they are only eight points above Fulham in the final relegation spot, so if this run continues then they could be in big trouble, so they certainly need a win desperately and soon to get the confidence back.

This is how the table looks after the latest games above… 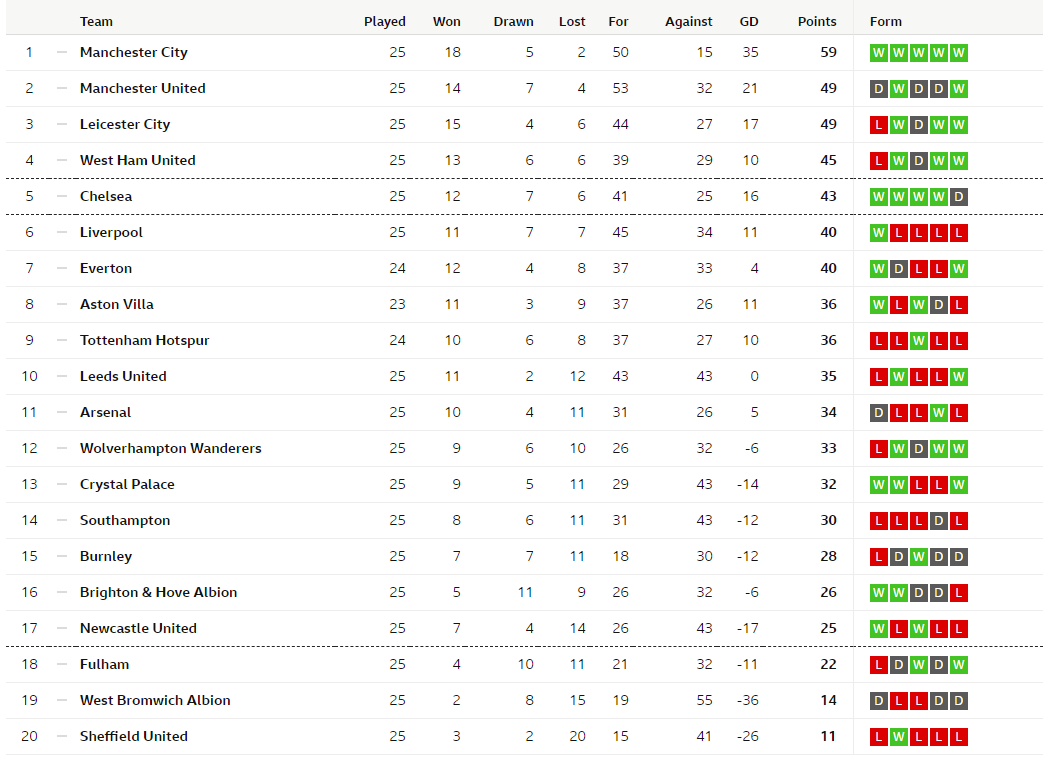 Manchester City leads the way, then come Manchester United and Leicester City, then you have four sides within five points of each other, West Ham currently have that coveted fourth spot, but Chelsea, Liverpool and Everton all will be eyeing that spot up, with Villa maybe also in the mix if they win their game in hand.

Down at the bottom it’s fair to say West Brom and Sheffield United are probably gone, so it’s just the final relegation spot to decide, Fulham will definitely fancy getting out of it so teams like Newcastle, Brighton and Burnley will be trying to keep them at arm’s length, and maybe Southampton could get dragged into it too, but you would fancy anyone above 14th would probably be ok now, but who knows in a season like no other in 2020/21?

Shall we look ahead to the weekend’s fixtures? Oh, why not …

Manchester City v West Ham United (12.30pm) (First against fourth at The Etihad, City would open up a thirteen point lead at the top if they win, although could The Hammers do the unthinkable and end City’s marvellous run?)

West Bromwich Albion v Brighton & Hove Albion (3pm) (The Baggies continue to be in the must-win category, and they take on one of those sides just above the drop zone, although West Brom are eleven points from safety so need a lot to go their way even if they do win a few games, and if The Seagulls do get something, it’s another game ticked off for them)

Leeds United v Aston Villa (5.30pm) (Leeds could actually go above Villa and into eighth spot, if they can pick up a win here, Villa though still harbour hopes of an outside chance of Champions League football, so need to win this one for sure)

Newcastle United v Wolverhampton Wanderers (8pm) (This is a very important game for Newcastle as if they lose this one then Fulham could go above them on Sunday on goal difference, the pressure is all on Steve Bruce’s men right now, and they take on a Wolves side who are unbeaten in four having won three of those, so it will be a very difficult game for them)

Crystal Palace v Fulham (12pm) (As said above, if Newcastle lose to Wolves on Saturday night, Fulham can go above them and out of the drop zone with a win at Palace, although the hosts will be buoyed by their last gasp win at Brighton so will make it tough for The Cottagers)

Leicester City v Arsenal (12pm) (The Foxes can go second if they avoid defeat in this one, and with Man United playing Chelsea later on in the day could stay there as well, but Arsenal are a good side on their day so will cause Leicester problems, and The Gunners still harbour hopes of European football so will be all out to try and win this one)

Tottenham Hotspur v Burnley (2pm) (Your feel this is a must-win for Spurs, although right now every game is a must-win as the pressure seems to be mounting on Jose Mourinho, they have lost five out of six now and will find it tough against a Burnley side who are in need of points to make their lives easier down at the bottom, so this one will be tight)

Chelsea v Manchester United (4.30pm) (No doubt about the game of the weekend, and it sees fifth-placed Chelsea up against second (or third maybe at kick-off) Manchester United, and depending on West Ham’s result at Man City on Saturday, Chelsea could go into fourth if they win this one. United though may need to win to grab second spot back so both will be very keen to pick up something from this game, proves to be a titanic tussle at The Bridge)

Sheffield United v Liverpool (7.15pm) (These two sides are both coming into this having lost three and four games in a row respectively, so both need the points for very differing reasons, The Blades are like West Brom, in the must-win territory, they will be at least fourteen points from safety at kick-off, whilst Liverpool could be as much as eight points off the top four by kick-off, so they have to win really if they want to keep their realistic hopes up of Champions League football next season)

Everton v Southampton (8pm) (The Toffees will want to build on that superb win at Anfield last weekend, and they could be only two points off the top four with two games in hand at kick-off if results go their way, whilst for the Saints, a win for them would certainly ease their relegation fears and give their squad a huge boost after what has been a woeful time lately for them)

So, another exciting weekend to come to the end of the month of February, be interesting to see how it all looks after these games take place!!! 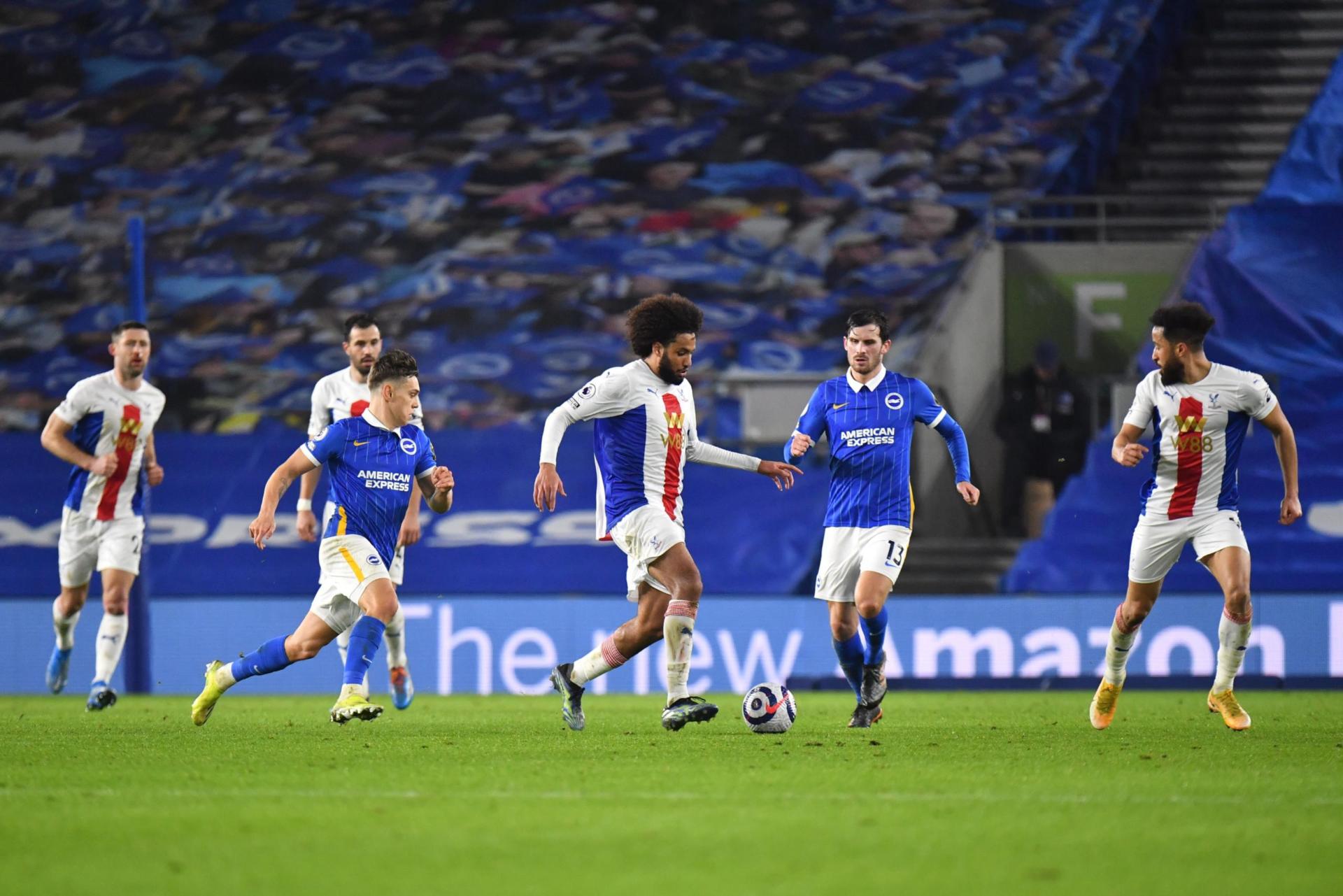