Chapecoense, a Brazilian football team with a fairytale story, were hit with nightmarish news Monday night.  The side was traveling to Colombia for a Copa Sudamericana (CONMEBOL’S equivalent of the Europa League) when their chartered plane experienced and electrical failure.  The crew declared an emergency at 10:00pm local time, and the plane crashed just 22 miles from the airport.

72 passengers and 9 crew members were aboard flight CP2933.  Rescue personnel were only able to find six survivors initially, but reports state that another survivor was recovered, and that there may be more.  Marcos Danilo Padilha, a footballer for Chapecoense died while being attended to by paramedics.  Two other players, two crew members and a journalist are in critical condition at a nearby hospital, leaving the death toll at 75.

Rescue efforts have been hampered by poor visibility and weather conditions.  Reports say that ambulances are only able to travel to a 30 minute walk from the crash site, requiring manual transport of any survivors.

CONMEBOL has suspended all matches, and the Brazilian federation has released statements of solidarity with the club.  Fans have flocked to Chapcoense’s stadium to mourn.  Ivan Tozzo, a club executive told a Brazilian news outlet that “many in the town are crying”.

The side that was to face Chapecoense in the final, Atletico Nacional, has requested that Chapecoense be awarded the Copa Sudamericana.

Show your support for the club and its fans with the hashtag #ForçaChapecoense, and by commenting on or sharing this article. 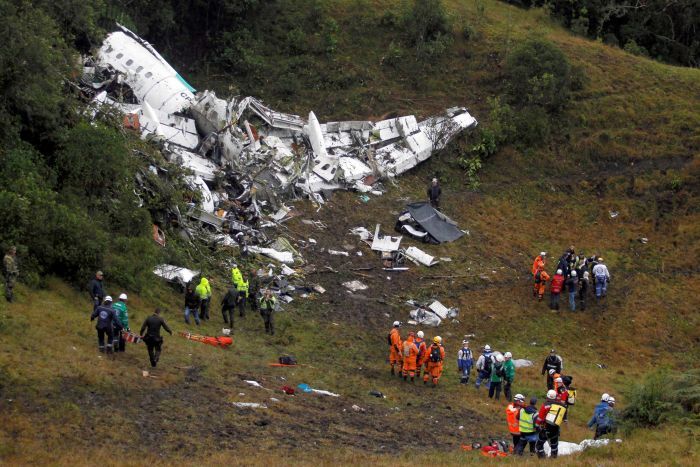