Round 14 of the Premier League continued on Sunday, with another four games, but before we look at today’s contests, lets quickly recap what happened on Saturday as four games did take place yesterday.

Liverpool smacked seven past Palace at Selhurst Park as they extended their lead at the top, Firmino and Salah both netted twice as the Reds grabbed only their second away win of the season in style, whilst Manchester City saw a Raheem Sterling effort enough to see off Southampton at St Mary’s, sweeping home a Kevin de Bruyne cutback after sixteen minutes.

Everton heaped more misery on The Gunners after Mina’s 45th-minute effort proved to be the winner at Goodison, Holding had netted a 22nd-minute own goal to put The Toffees ahead, but Pepe had brought Arsenal level ten minutes before the break.  And the final game of the day saw Newcastle and Fulham share a 1-1 draw at St James Park.

Ritchie’s own goal had given the visitors the lead three minutes before the break, but huge controversy came in the leveller for the hosts, as Wilson was brought down by Andersen, and after VAR checked to see if it was a penalty or not, they deemed it a spot-kick and then red-carded Andersen.

The foul was outside the box, and Wilson would not have been on goal as a covering defender was coming across, so how VAR deemed it what they did is confusing, Fulham boss Scott Parker was less than impressed let’s just say.

Onto Sunday’s action now, and four games starting at The Amex as Brighton took on Sheffield United…

Danny Welbeck netted al late leveller to deny the bottom side their first three points of the season, this after Bogle has given the ten-man a second-half lead.

The first half had seen the hosts with most of the ball and had a couple of decent openings too, with the visitors only real effort seeing McGoldrick’s free-kick brilliantly saved by Sanchez, but the main talking point of the first period was Lundstrom’s red card eight minutes before half time.

His challenge on Veltman was out of control and although he won the ball before getting the man, it was a forceful challenge shall we say, and after initially receiving a yellow, VAR and a look at the screen by the ref saw that upgraded to a red, rightly so as well in my view, Veltman was unable to continue after the break because of it.

A long second half for the bottom side then?  Well, they went in front after Bogle, who had replaced Brewster, saw a deflected effort fly past Sanchez and the visitors had around twenty-five minutes to hold on.

Could they grab their first win in fourteen attempts?  Sadly, for them no, because four minutes from time Welbeck, also on as a sub, showed great composure to control and send a powerful volley home from close range, they had time to go on and win this now.

And they so nearly did too, as deep into stoppage time Baldock somehow headed against the bar from point-blank range and The Blades had survived that, just, and picked up a second point of the season and ended an eight-game losing streak, although they would be disappointed they couldn’t hold on for all three perhaps.

Albion themselves probably felt they should have got more from the game too, but they will have to settle for a point as well.

A Jamie Vardy penalty and a Toby Alderweireld own goal saw The Foxes to a deserved win at the Tottenham Hotspur Stadium.

The opening half-hour was rather mundane to say the least, although a half wondered towards the end the game did liven up a bit, with Harry Kane heading over the hosts best opening, Leicester always looked the more dangerous in attack and in first-half stoppage time a moment of madness from Aurier handed The Foxes a spot-kick.

He barged himself into the back of Forfana, and after VAR checked and got the referee to look at it, the penalty was rightly awarded, and Vardy hammered home down the middle and Leicester had a deserved half time lead.

The Foxes thought they had doubled their lead early in the second period, but VAR had other ideas, and they ruled that Maddison was offside when he received a ball over the top before producing a good finish, but those lines appeared and ruled his elbow was offside, very frustrating for all, especially for the visitors.

It did not affect the visitors though and they did double their lead when a cross was headed back across goal by Vardy and onto the knee of Alderweireld and past a helpless Lloris into the net, it was no more than Leicester deserved and they easily saw out the game to take a very good three points.

Spurs have now lost back-to-back against the now top two, their title aspirations certainly have taken a bit of a blow in the last few days that is for sure, whilst for Leicester, shades of 2015-16 perhaps, who knows?

Onto game number three of the day, and the return of Man United vs Leeds in the Premier League…

This turned out to be a crazy game at Old Trafford as the hosts netted six as they demolished the visitors backline in the North West.

It all began rather badly for the hosts and rather set the tone for the afternoon when Scott McTominay drove home from outside the area in less than two minutes, and then he netted again a minute later and the hosts were two goals up inside three minutes, with both coming from McTominay, madness!!!

Leeds were attacking just as much as their opponents and saw a goal ruled out for offside, but on twenty minutes the hosts went three up after Bruno Fernandes rifled home a loose ball inside the box and Leeds found themselves 3-0 down in no time, with Bielsa looking rather stunned perched down on the touchline.

It was to get worse for the visitors as Man U made it four on 37 minutes as a Martial flick-on found an unmarked Lindelof at the back post who applied a decent finish from close range and Bielsa was now up and pacing up and down the touchline, he was not happy it’s fair to say.

Liam Cooper did at least get Leeds on the board just before half time when heading in off the post, but Man U led 4-1 at the break, and not many people would have seen this coming before kick-off, would have loved to have been a fly on the wall in that Leeds changing room at the break, Bielsa certainly had work to do.

The second period continued with it’s ‘attack attack attack’ mantle, but it was Man U who added another when Dan James burst through to finish under the keeper, and then Fernandes added a sixth from the spot after Martial had been fouled, and then the hosts brought on Cavani soon after, just what Leeds wanted to see.

Dallas did at least net the goal of the game when curling home superbly to make it 6-2, it had been some game, but Bielsa was looking angry on the touchline and about to combust I feel, it had been a crazy game of football and one were zero defence was on show too.

I cannot recall ever seeing a PL game with so many attempts on goal, forty-plus combined, but it all meant the hosts went up to third and just five points off the lead with a game in hand, not bad for a team who are supposedly not firing under boss Ole, not doing a bad job is he really let’s be honest?

Leeds remain 14th after that, with boss Bielsa furious no doubt, he said afterwards that they would not change their style of play, so expect more entertaining games with them involved.  They should be thankful for their keeper today, otherwise, it could have been double figures for the hosts.  Yes, Leeds created plenty themselves, but they were destroyed at the back today.

Our final game of Sunday took us to The Hawthorns and a big Midlands derby between West Brom and Villa, with Big Sam taking charge of his first game for the hosts…

It is fair to say Big Sam’s first day at the office didn’t go to plan, firstly Viila keeper Martinez handled outside the box but was not given a card, which seems weird, and then in the fifth minute Villa grabbed an early lead as Anwar El Ghazi netted, not the start the new boss was looking for.

It got even worse for the hosts eight minutes before the break when Jake Livermore was eventually sent off after a nasty tackle on Jack Grealish, the initial decision was a yellow card, but rightly upgraded to red after review, and then a few minutes later Big Sam must have wondered why he had come back into management when another VAR decision did not go in their favour.

Kortney Hause late challenge was not even looked at, and it was no worse than Livermore’s challenge moments before, so why no red?  It is the inconsistency of it all that frustrates us all, so not sure what the guys in the truck were looking at so to speak, surely it had to be the same outcome?  Anyway, Sam had his work cut out and really had to earn his corn with his team talk at the half.

West Brom did see a VAR decision go for them in the second period although it was lubricous, to be frank, Villa thought they had deservedly doubled their lead after a dominant second period, but Ollie Watkins effort was deemed offside, with those wonderful lines coming into play again, it really does suck the life out of it and there were millimetres in it, not what it was designed for quite frankly, and all rather frustrating.

It did not matter in the end as Villa saw Traore produce a lovely finish for 0-2, and then El Ghazi netted his second after converting a spot kick following a foul on Grealish, again, and Villa was cruising to a derby win and the three points.

It had been total dominance from Dean Smith’s men, and Big Sam now knew the size of the task that lay in front of him, if he didn’t already know that. 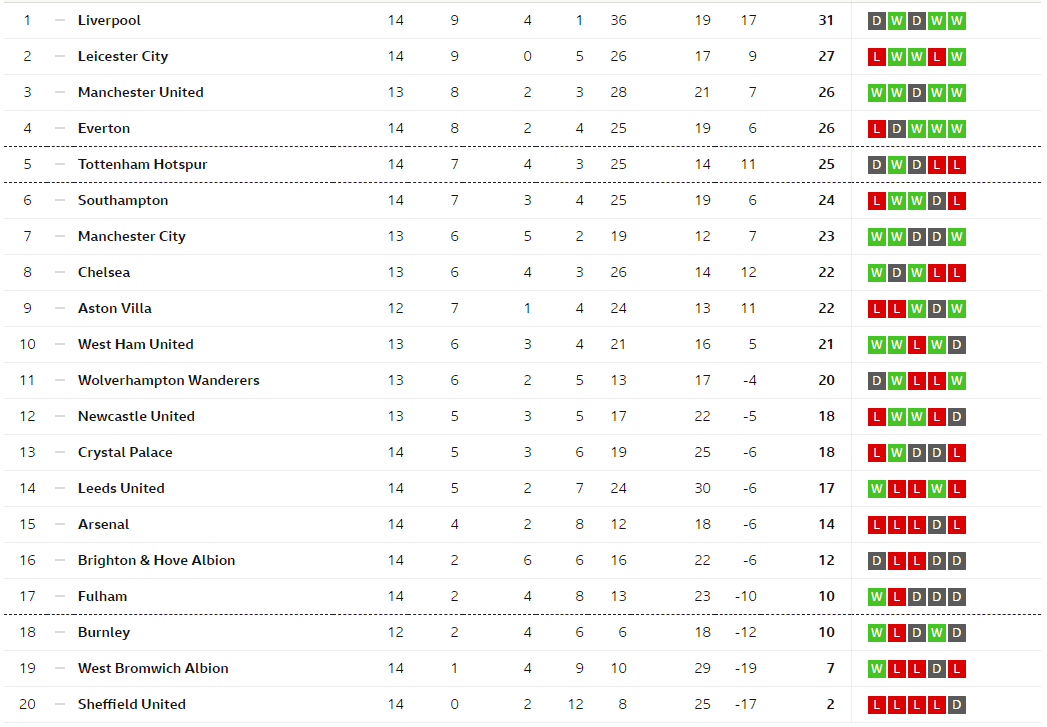 Liverpool have a four-point cushion at the top over Leicester who now is their closest challengers after their win at Spurs, Man United are now into third and right in the mix with a game in hand after they netted six against Leeds, and Everton makes up the top four after victory over a struggling Gunners.

Spurs slip to fifth after back ton back defeats, and there is only six points between the top four and eleventh placed Wolves, which is mad.

Down the bottom and Sheffield United are still eight points from safety despite a second point of the campaign, although they need wins now and not draws, whilst West Brom remains in the bottom three and three points from safety after today’s loss.  Arsenal is now just four points above the drop zone and are in a real dogfight now, Brighton’s point today took them two clear of the dropzone.

Two games tomorrow as I said, these are those below…

Burnley will climb out of the bottom three with a point, whilst Wolves can go back into the top ten with the points, Chelsea will go fifth and above bitter rivals Spurs with a win over West Ham, who themselves can go sixth and above Chelsea if they pick up a win at Stamford Bridge.  More drama to come no doubt!!! 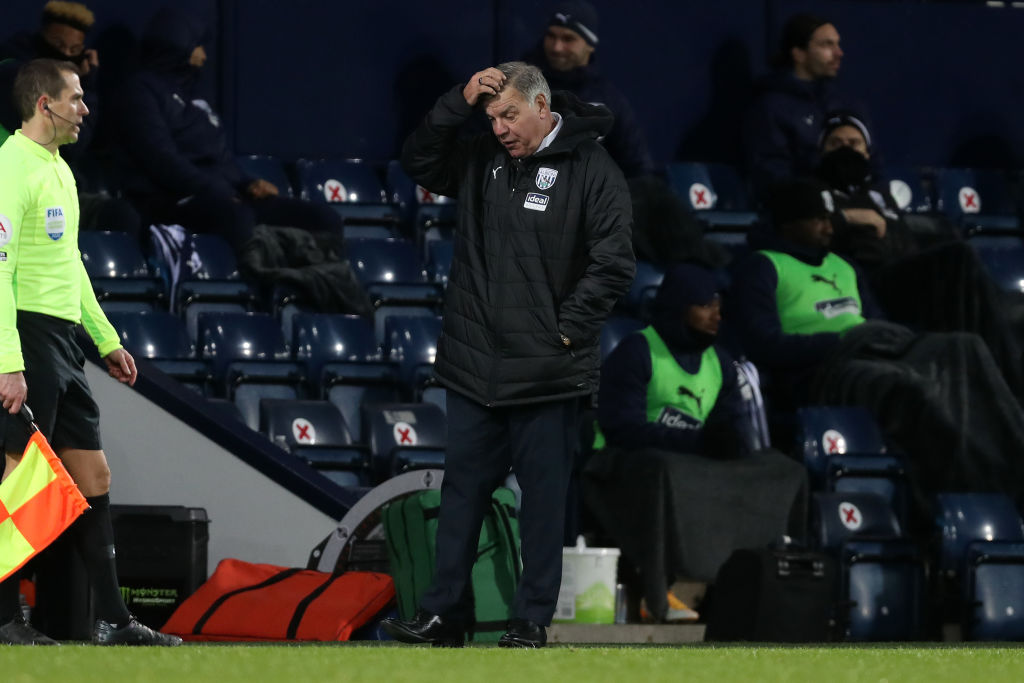