The final day of this weekend’s County Championship action saw Chris Rushworth break a record for Durham while rain-affected two games around the country.

With the visitors requiring a target of 423 to win, they started the day’s play on 60/0 with Daryl Mitchell (62 off 72) being the first man out with the score on 79 as he was caught by Jack Burnham off the bowling of Mark Wood before Tom Fell would be LBW to Brydon Carse for 1. Jack Haynes would be the next to go for 24 as he was caught by Bedingham off the bowling of Chris Rushworth, that wicket seeing him take the Durham record for first-class wickets with Haynes being his 528th in red-ball cricket.

The middle-order would collapse from 133/3 to 136/7 as Brett D’Oliviera (7), Riki Wessels (0) and Jake Libby (36) all falling in consecutive overs to Wood and Rushworth before Ed Barnard was caught behind off the bowling of Carse soon after. Joe Leach and Ben Cox would both be LBW to Rushworth before Scott Borthwick would finish the game as he had Charlie Morris caught behind as the hosts won by 258 runs.

Durham moves up to 3rd with this result, ahead of the Pears, while both teams are back in action on Thursday as Durham travel to Derbyshire and Worcestershire head to Trent Bridge to face Nottinghamshire.

Resuming on 97/1 in their follow on, Billy Godleman would be trapped LBW to Jamie Porter for 45 with the score on 111 before Brooke Guest (65) would be dismissed by Sam Cook the same way after 7 runs had been added. Wayne Madsen (36) and Leus du Plooy (39) fell in consecutive overs to Simon Harmer and Shane Snater respectively before Harmer would also dismiss both Harvey Hosein and Fynn Hudson-Prentice (both caught by Ryan ten Doeschate). Matt Critchley (25) would be caught by Sir Alistair Cook off the bowling of Porter before Sam Cook would take the final couple of wickets, first Alex Hughes then Billy Stanlake, as the hosts won by an innings and 15 runs.

This result sees the teams book-end the table, Essex at the top with Derbyshire at the bottom with the next fixtures seeing Essex host Warwickshire on Thursday with Derbyshire host Durham on the same day.

ALSO READ: Derby In A Spin As Harmer Takes 9 In First Innings

The rain, once again, got the better of things in this clash at Taunton as there was no play at all for the second day of the match (with yesterday only seeing 9 overs).

This result sees Somerset into 2nd place while Surrey are in 4th place. Somerset travel to Gloucestershire on Thursday while Surrey host Middlesex the same day in this week’s game that this live on Sky.

Resuming on 108/3 at 3.40 pm after more rain, David Lloyd (40) and Kiran Carlson would add 9 to the overnight score before Lloyd would be dismissed without troubling the scorers today, falling LBW to Ben Coad, before Carlson who finished on 88 not out and captain Chris Cooke (8 not out) would see the hosts through to the start of the final hour where the teams shook hands to end the game.

Glamorgan move into 3rd place with Yorkshire move top of the group. Glamorgan travel to Kent on Thursday while Yorkshire have this week off.

Resuming on 138/2, Zak Crawley and Jack Leaning would put on 51 this morning before the England international would be caught by Aaron Thomasson off the bowling of Jack Carson for 85. Leaning (127 not out) and Ollie Robinson would put on 172 for the fourth wicket before the latter was LBW to Tom Clark, again for 85, with Zimbabwean-born batsman Tawanda Muyeye scoring 12 not out as the declaration came from the visitors with both teams shaking hands at this point.

This result sees both sides remain at the bottom of the group, Sussex in 5th and Kent below them. Sussex have this week off while Kent will host Glamorgan on Thursday. 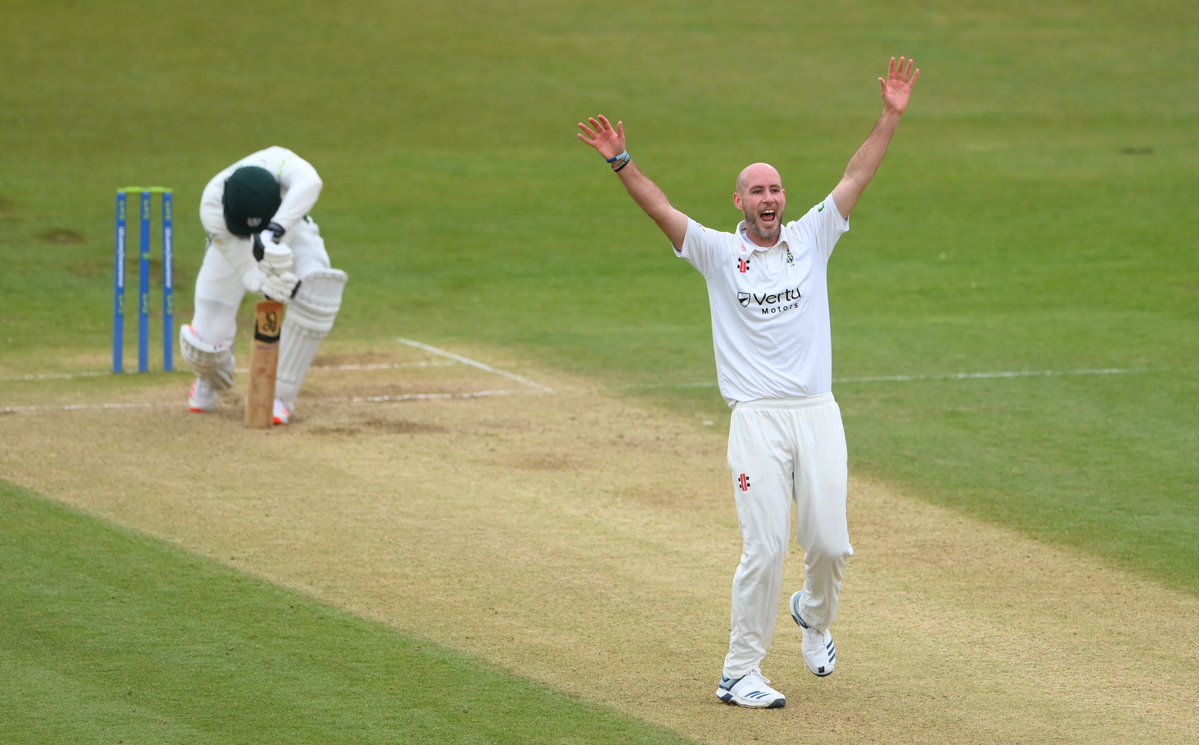