A late-race caution with five-laps remaining caused by a blown right tire by Joey Logano which was caused by a melted bead, gave Ryan Newman the chance to stay out on the track and pocket his 18th career Cup win and Childress his first since 2013.That caution put the race into overtime which tempted leaders Kyle Busch and Kyle Larson to pit.

Newman was told to stay out, as Ricky Stenhouse and Martin Truex had decided not to pit.Newman managed to have a good restart to get clear of Stenhouse on the Green White Checkered attempt, Stenhouse spun the tires causing the field to break up.

This gave the advantage to Newman despite not taking fresh rubber. Kyle Larson tried to make a last ditch effort, but it wasn’t enough.Kyle Larson, Kyle Busch, Ricky Stenhouse Jr. and Brad Keselowski rounded out the top five. For those that are interested in slots, check out Fantasy-inspired online slots.

Busch was leading by a sizeable margin prior to the late caution and was just trying to hang for the last handful of laps but it wasn’t meant to be,Busch was stuck in fifth on the inside of the third row after the last pit stop, having to slow to narrowly miss hitting his brother, Kurt, as he pulled out of his stall.Busch led a race-high 114 laps on the day.

“It was a long time coming,” said Newman who last won the Brickyard 400 in 2013. Childress’ last win came here at Phoenix Raceway in the 2013 fall race with Kevin Harvick.

“What a gutsy call by (crew chief) Luke (Lambert). I called for two tires and he called for none. I’ve won more races no tires than I have with four. I’m just proud of these guys. We had a good car all day. We kept it out of trouble and collected in the end.”

Logano qualified on the pole for the race, was fastest in the final Happy Hour practice on Saturday and was the class of the field for the first 75-lap stage of Sunday’s race, leading 74 laps to take the stage victory.He would be letdown by a costly speeding penalty

Elliott grabbed a win for Chevrolet in the second phase leading 65 laps ,Kyle Larson was second followed by Kyle Busch, Jimmie Johnson and Brad Keselowski.Elliot however finished the day outside of the top 10.

The race series heads to Fontana, California this weekend for the Auto Club 400. 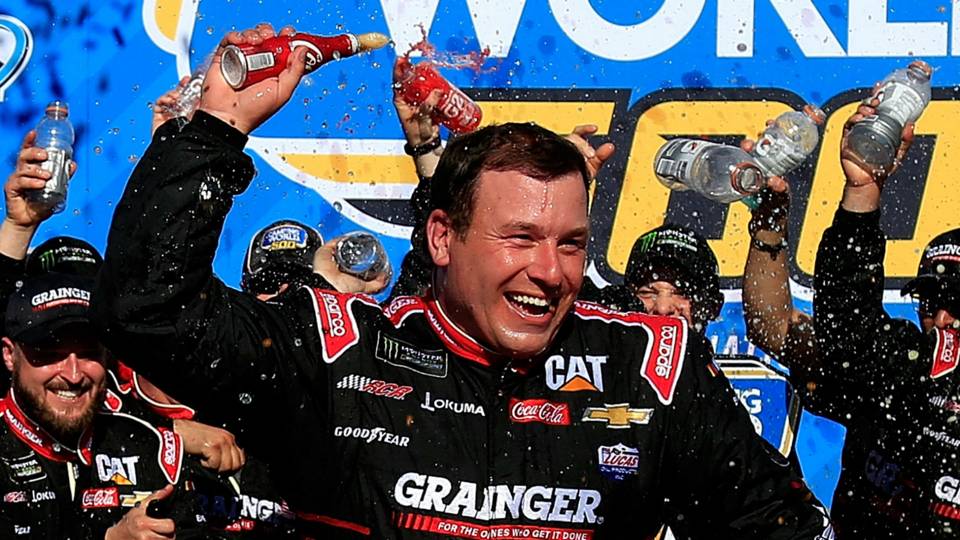