At the start of lockdown when football around the world was getting cancelled, it provided a chance to reminisce and watch back some of footballs all time classic games. Fast forward two months later and there is only so much Euro 96 a person can watch. If you are at the point where you are fed up with the same matches being repeated over and over again here are 10 football matches that are often forgotten about to watch until football resumes.

Heading into the 2017/18 season Barcelona had been rocked by the surprise departure of Neymar to PSG for a world record £198 million pounds. Many people wondered how Barcelona would fair after their formidable “MSN” trio was broken up. In La Liga at least Barcelona were fine and secured another league title.

With the league title already wrapped up and just two games left to go in the season, Barcelona looked set on becoming the first Spanish side to go unbeaten in a 38 game season.

The match at the Estadi Ciutat de València was effectively an end of season dead rubber with Levante already having secured their top flight status.

Levante took an early lead and from their never looked back and at one-point lead 5-1. Philippe Coutinho arguably had his best game for Barcelona scoring a hat-trick as Barca lost for the first time in 44 league games.

In top flight modern day European football, it is incredibly rare to see a team score 10 goals in one match and on the rare occasions it does happen there is usually a big gap between the two sides such as Real Madrid’s 10-2 victory over Rayo Vallecano in 2015.

That’s what made PSV’s 10-0 victory in 2010 even more remarkable, the fact they weren’t playing against some minnow of Dutch football they were playing against the former European champions Feyenoord.

Feyenoord had been reduced to ten men midway through the first half but only trailed 2-0 at half time, before their implosion in the second half.

Starting for Feyenoord on that fateful day were Georginio Wijnaldum and Stefan de Vrij who since have gone onto become important players for both Liverpool and Inter Milan respectively as well as the Dutch national team.

Brazil’s 7-1 loss to Germany and the Netherlands 5-1 victory over Spain are the two standout matches from the 2014 World Cup in Brazil. With shock results between these huge footballing nations it’s sometimes easy to forget how many dramatic games there was during the tournament in Brazil.

One of those games was the final Group C match between Greece and Ivory Coast in Fortaleza. With Colombia beating Japan in the groups other game both sides had the chance to progress to the last 16. When Wilfred Bony equalized for the Ivory Coast in the 76th minute the African side looked assured of a place in the knockout round.

Going into the 2006 and 2010 World Cup’s many considered Ivory Coast as a dark horse due to the array of top players they had in their squad with players like Didier Drogba and the Toure brothers at their disposal. However, The Elephants never had the luck of the draw first being drawn alongside Argentina, Netherlands and Serbia and Montenegro in 2006, then drawing Brazil, Portugal and North Korea four years later.

2014 provided Ivory Coast’s golden generation the best possibility of making it past the group stage for the first time, and with just seconds of their game with Greece reaming they were on the verge of doing it until the Greeks were awarded a controversial late penalty.

Georgios Samaras converted the penalty for Greece sending them through and in the process sent Ivory Coast out at the group stage for a third tournament in a row and brought down the curtain on one of the best African sides of all time.

Both North African rivals had been waiting over 20 years to make their return to the World Cup finals which only hyped these game even more. The first game finished 3-1 to Algeria but the return game in Cairo is when the drama started.

Before the game the Algerian team bus was attacked and there was political tension between the two countries. On the pitch Algeria had to avoid losing 2-0 and they would qualify for South Africa. Egypt secured a 2-0 victory with their second goal coming in the 95th minute of the game. This meant the two rivals could not be separated and had identical records in qualifying, so a third game was needed to decide who would qualify.

The third game was to be played in Sudan, were Algeria won 1-0 to qualify, but the game was overshadowed by violence of the pitch reported in Sudan, Algeria, Egypt and France.

As expected the story didn’t end there with the fallout turning political in the weeks that followed. The question is often asked when two teams are competing against each other what will happen if they finish level on points? Well in 2009 we got our answer and it wasn’t pretty.

Spain’s first match after winning their maiden World Cup title in 2010 saw them travel to Buenos Aires to take on Argentina. Apart from games leading into the World Cup in Brazil in 2014 it has become a rare occurrence in recent years to see the major European sides take on their South American counterparts in South America.

The Spanish had dazzled the world just months earlier in South Africa with their Tiki-Taka style of play, but thanks to goals from Lionel Messi, Gonzalo Higuaín and Carlos Tevez, Spain had been ripped apart by half time.

Despite it being just a friendly it was only Spain’s third defeat in four years dating back to 2006 and was the first time Spain had been completely out played whilst playing Tiki-Taka.

For some reason the Confederations Cup never got the credit it deserved. The format which saw the champions of each confederation pitted against the World Cup champions and World Cup hosts was so simple and produced many memorable matches.

The 2005 competition in Germany produced many great game such as Germany beating Australia 4-3 in the opening match and Brazil’s 3-2 semi-final victory over the hosts. However, the stand out game was Brazil’s victory over rivals Argentina in the final.

Adriano, Kaka and Ronaldinho were at their very best and produced one of the all-time great performances in a major final. If anyone ever needs reminding of what a talented player Adriano was then all they need to do is sit back, relax and enjoy this game.

There was no dramatic second leg come back here like we have become accustomed to in the knockout stages of the Champions League, it was just a straight forward victory for Atletico Madrid. However, looking back on this game now it was actually very significant.

This match represented a changing of the guard in European football. AC Milan in truth by this point were already on a downwards trajectory and this game marked their last appearance to date in the Champions League. It also turned out to be Kaka’s last appearance in the competition.

On the other hand, this match was the first time Atletico had reached the quarter finals of the Champions League since 1997 and have since been runners up twice and won a Europa League title.

Much like the tournament mentioned in 2005, this addition of the Confederations Cup produced its fair share of memorable matches.

Brazil had played some great football in the group stages against Japan, Mexico and Italy, while Spain had been involved in a surreal match against Tahiti which they won 10-0 and could have been more.

The final at the Maracana was dominated by Brazil as they easily won their third consecutive Confederations Cup, and ended Spain’s 29 game unbeaten streak.

Again looking back at this game gives it more significance as it marked the end of Spain’s era of dominance in world football and was a precursor of what was to come a year later for the Spanish back in Brazil at the World Cup as they went out in the group stage after shambolic defeats to the Netherlands and Chile.

Much like the Confederations Cup the annual curtain raiser to the European football season doesn’t get the credit it perhaps deserves because for many fans it is viewed as a glorified pre-season match.

The 2015 addition of the Super Cup in the Georgian capital of Tbilisi was by far the best Super Cup in history. Sevilla had taken an early lead, which only lasted for minutes till Lionel Messi equalized. From their Barcelona raced into a 4-1 lead and looked destined for their fifth title. Sevilla had other ideas and staged a dramatic comeback to force extra time.

Pedro scored Barcelona’s winner in extra time to take the trophy back to Catalonia, made all the more dramatic as he had requested to leave the club and was being strongly linked to Manchester United at the time. As it turned out this was Pedro’s last game for Barcelona and he joined Chelsea nine days after the final.

The game between Manchester United and Europe XI was arranged by UEFA in 2007 following a request by the European Union to mark 50 years since the signing of the Treaty of Rome and also marked 50 years of Manchester United involvement in UEFA competitions.

The match at Old Trafford saw United name a strong side which included Wayne Rooney and Cristiano Ronaldo as well as Andy Cole returning to make a guest appearance of the bench.

Unfortunately, the European side manged by Italian World Cup winning manager Marcello Lippi had a number of big name withdrawals including Ronaldinho but still fielded a side which included Zlatan Ibrahimović, Andrea Pirlo and Steven Gerrard.

Ronaldo scored the pick of the nights seven goals with a fantastic 30-yard free-kick which whizzed past Santiago Cañizares in goal for the Europe XI.

Games of this nature are common in American sports and a lot of football fans would be happy if we could get more of this type of match, maybe an annual Europe XI against the Champions League winners. 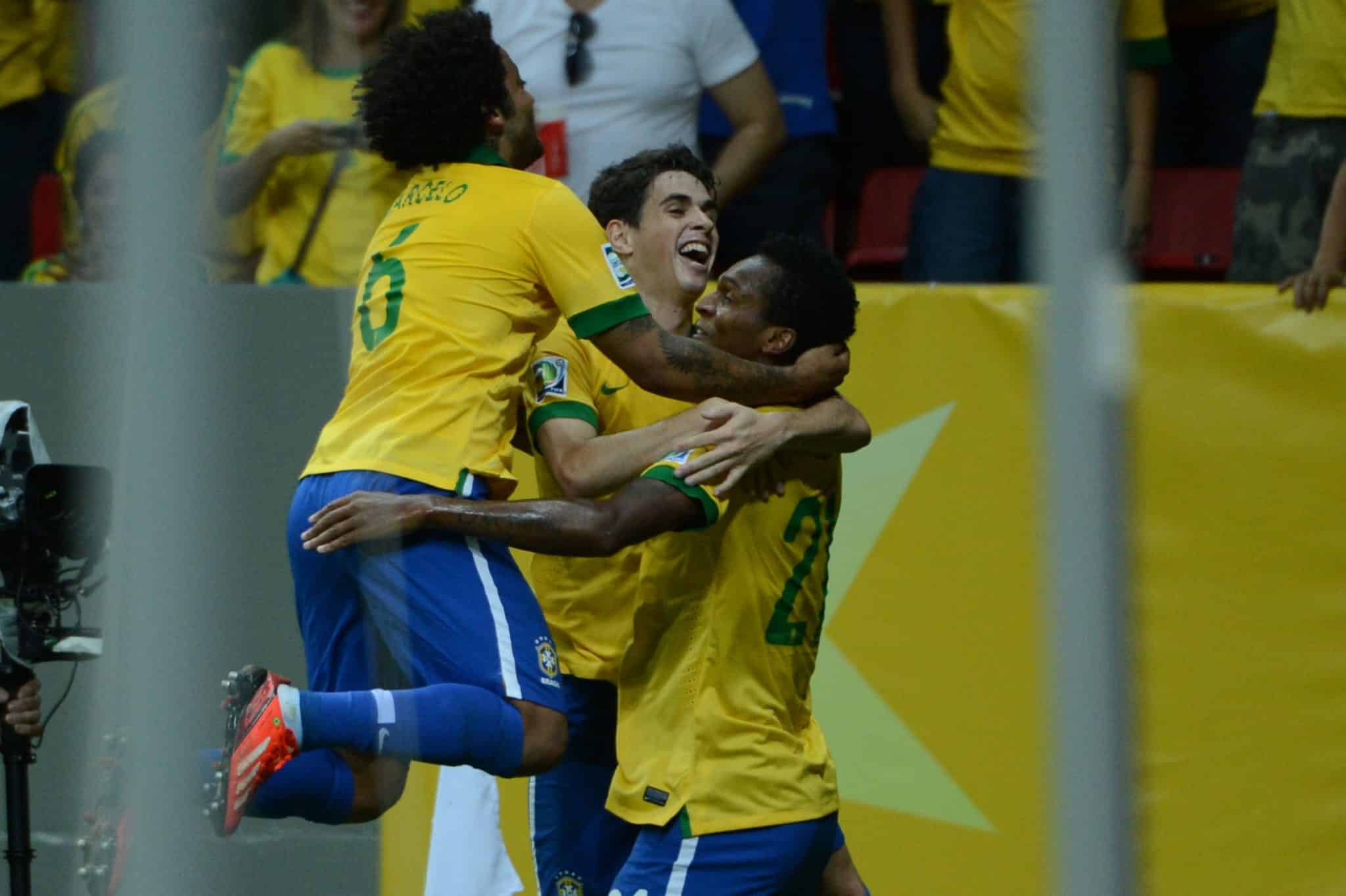