When you think of the leader of the offense, you think of Joe Montana, Tom Brady, Aaron Rodgers, or Peyton Manning. You think of Troy Aikman before you think of Emmitt Smith. You think of Kurt Warner before Marshall Faulk. This phenomenon began around the 90’s where QBs with all time great RBs began to steal the show with their air raids and flashy throws. With the Cleveland Browns, they had a disappointing offense in the 2019-2020 season. They only ranked 22nd in PPG in the NFL in 2019, and despite having a ton of offensive weapons. This can be chalked up to their struggling QB who was given more and more pass attempts under an incompetent HC.

They had a poor offense, yet their brightspot, Nick Chubb, was under-utilized. The Browns need to use Nick Chubb, as it can change their whole offense for the better.

The Underappreciated Career of Nick Chubb

So far in Nick Chubb’s career, Nick Chubb is averaging 1,245 yards on 245 attempts a season. This coupled with 8 TDs per season, and 11 runs of 20 or more yards per year. If he put up those numbers in 2019 he would’ve been 5th in yards, 9th in TDs, 1st in runs over 20 yards, but only 10th in attempts. The Browns haven’t given him the reigns to the offense even though he’s proven to be worth the role. In 2019 he ran for 1,494 yards yet was given the backseat to Baker Mayfield? I love Baker, he’s why I love the Browns, but you can’t give a struggling QB the reigns to your offense when you have a dominant RB in your backfield.

Over-Powered Partner in the Backfield

Kareem Hunt has a career 4.7 Y/A which is just as good as Alvin Kamara’s 2019 Y/A. I don’t believe Hunt is that caliber of RB but for an RB2? He’s ELITE, and can give the Browns an offensive scheme similar to the San Francisco 49ers offense. Multiple RBs and Play Action passes can make this offense scary.

Having to guess whether you’ll get Nich Chubb or Kareem Hunt out the backfield or Baker Mayfield hitting Jarvis Laundry or OBJ on a pass is impossible for defenses, but it only works if you give the RBs the key to the offense. The best offensive player on your team is probably Nick Chubb and by making him the face of the offense you allow Baker Mayfield to develop and not be headhunted by defenses.

When Baker Mayfield had rough games or was getting crushed by defensive lines due to a poor O-line, Freddie Kitchens just threw him back into the fire. I can’t even begin to comprehend how stupid it was not to just get Nick Chubb more involved to alleviate Baker of the pressure he had in the first few games. Had the Browns given Nick Chubb more rushes and Baker less passes, they could’ve curbed Baker’s turnovers and maximize the potential of their offense. Their 2-2 start could’ve been built upon even further. They could’ve had a much better season had they rushed more, and the stats prove it.

Breaking Down the Splits

When comparing the metrics, it’s very clear that Baker Mayfield is much better QB when his RB gets more attempts per game. Are those numbers very good? No but they would’ve been good enough to make the postseason arguably. The Browns best stretch of football is when they went 4-1 over 5 games, and they averaged 28.8 rushes a game.

It’s not at all a stretch to say that the Browns and Baker Mayfield are so much better when Chubb gets a lot of touches, and if they give him touches, they’ll be in the playoffs next season. 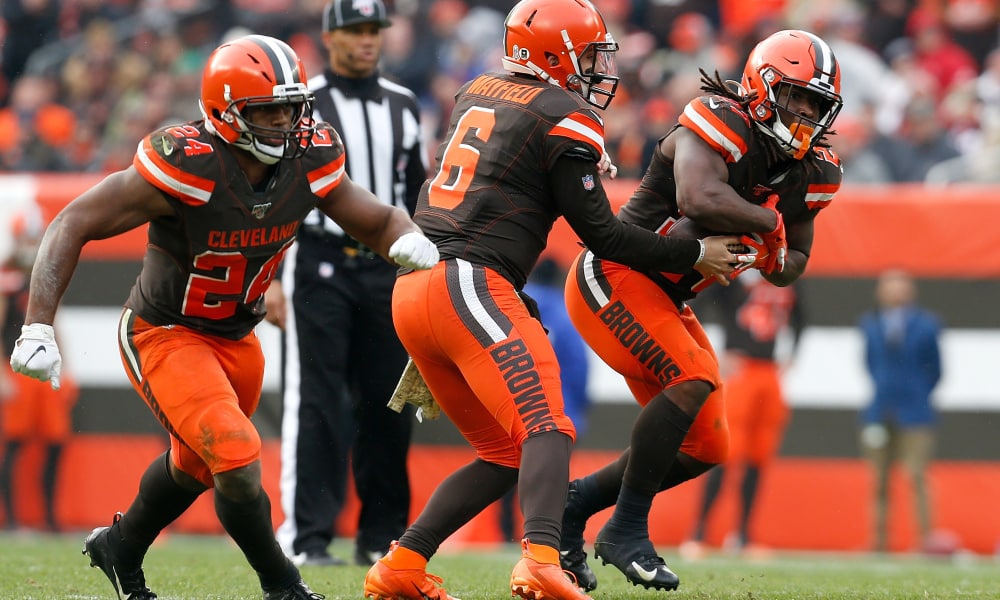