When star-caliber players such as Joe Haden go down with an injury, it oftentimes gives other players of similar position a chance to show the team what they’re made of. This is exactly the case for the Cleveland Browns cornerback position. Joe Haden missed the Browns preseason opener against the Washington Redskins and Monday’s join practice against the Buffalo Bills at St. John Fisher College in Rochester, New York, giving players like Justin Gilbert and Tramon Williams a chance to earn their stripes.

Justin Gilbert, the eighth overall pick in the 2014 NFL draft, disappointed many in his rookie season with the Browns. In his rookie season, the 23-year-old defensive back combined for just 29 tackles, one interception and one touchdown. Veteran safety Donte Whitner went as far as saying it was “a wasted year for him (Gilbert),” and even asked him to “grow up and not be a kid anymore.”

After admitting he was distracted by “family business” during his rookie season, Justin Gilbert told reporters that he’ll “work a lot harder”. He was given an opportunity to prove his disgruntled teammates that he could make a leap during his sophomore season. Though he is being handed an opportunity on a silver platter, Gilbert has failed to live up to his first-round expectations… Again.

In last Thursday’s preseason opener against the Washington Redskins, Gilbert looked flat-out sloppy. In the early stages of the first quarter, Redskins receiver Pierre Garcon blew past the second-year corner in what looked to be a sure-fire touchdown for the Redskins, but ultimately dropped the pass. Now, he didn’t drop this pass because of Gilbert’s defense. Matter of fact, Gilbert was five yards behind the receiver.

Instead of staying concerned with where the receiver was going, Gilbert was more focused on where Robert Griffin III was looking; leading to Garcon blowing right past him. Gilbert’s teammate Tramon Williams firmly believes plays like this will only help Gilbert in the long run.

“It is just another opportunity for (Justin),” Williams said. “At this position, you always want to get as many reps as you can. It is good for him to go through some of those trials right now. He will be better, no doubt about it. Trust me, he’ll be good.

These are pretty encouraging words coming from a veteran like Williams. The Browns decided to sign Tramon Williams after starting cornerback Buster Skrine decided to ink a deal with the New York Jets. In his seven seasons in the NFL (all with Green Bay), Williams has 391 tackles, 28 interceptions and one touchdown under his belt. According to Andrew Gribble of ClevelandBrowns.Com, only All-Pro Darrelle Revis has more passes defensed than Williams’ 115, and only Cleveland’s own Joe Haden has more passes defensed since 2010 than Williams’ 82.

Williams put on a show during the join practice against the Buffalo Bills on Monday. After Williams basically blanketed the Bills’ receivers, batting down balls, using proper techniques, and all-around aggressive play resulted in Tyrod Taylor, Matt Cassel and E.J. Manuel not even looking in Tramon Williams’ direction.

Bringing in Tramon William could very well be the best decision the Browns made during the offseason. Not only is he still fully capable of playing the cornerback position at an efficient rate, but he has also been a mentor to younger players such as Gilbert, K’Waun Williams and Pierre Desir.

During the 2014 season, the Browns’ defense ranked second behind only the San Francisco 49ers in total interceptions with 21. Knowing they have Joe Haden recovering from a minor hamstring injury, and somebody like Tramon Williams who is willing to help the younger players, such as Justin Gilbert who still has plenty of time to improve,  it’s pretty clear to say Cleveland doesn’t have much to worry about when it comes to the secondary. 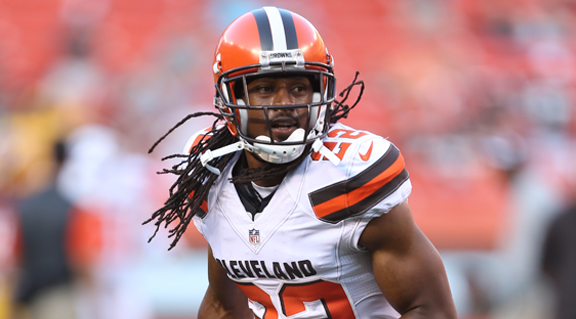