Russell was able to defend his position on the track after he was told that he and Lewis Hamilton were going racing.

Managing two competitive drivers is nothing new to the German boss. Nico Rosberg’s and Lewis Hamilton’s stint together as Mercedes drivers saw the two drivers battle it out for the World Championship for 3 consecutive years.

“He had the win on his hands in Bahrain a few years ago, now he drove it home. He had the pace, and he withstood the pressure at the end. Hamilton pushed out but he came back. They are both alpha drivers, which is good,” Wolf told Sky Sports.

Wolff continued with his praise: “We don’t want a puppy in the car. We will manage this as well as we can.

“He had a strong start, then a dip. But they push each other which is good to see. They work well together. You can see similar levels between Hamilton and Russell.”

Although the tears of joy and happiness from Russell at the end could have been one of sadness as Wolff also revealed that there was a water leak.

To my family, my friends, my teammates and everyone who has been on this journey, thank you. I can't put into words how much your support means to me and how much of a joint effort it has been. This win is as much yours as it is mine. We did it, together. I'm so proud of you all. pic.twitter.com/BC2PnM5sf7

Wolff told Sky Sports: “As an aside, we had a water leak on the car throughout the race and it wasn’t clear whether we could actually make it to the end.

Mercedes confirmed the issue occurred halfway through the race and Russell was not told.

A spokesperson added: “We were concerned at one point that we would be four-five laps from the finish and not make it. But then it did but by the skin of its teeth.”

The issue did not end up being a problem and Russell stormed to victory to claim his first F1 win after so many ‘nearly’ wins in recent years.

Russell reflected on his victory and said: “Amazing feeling, just a huge thank you to the whole team for making this possible,” said Russell.

“It’s been an emotional rollercoaster this season. This race was a really tough race, I felt we controlled, Lewis was super-fast and then when I saw the Safety Car, I thought this is going to be a really difficult ending, he put me under so much pressure, but so happy to go away with the victory.

“On the in-lap, all of these memories came flooding back, it started off with my mum and dad in go-karting and go through and all the support I’ve had from the rest of my family, my girlfriend, my trainer, my manager.

“And then obviously the likes of Gwen [Lagrue, Mercedes driver development advisor] who gave me the opportunity to get on the programme with Mercedes and James Vowles [chief strategist] and Toto, the list is endless, I can’t thank enough. Super proud.”

George Russell is now 4th in the Drivers’ Championship and is now 25 points clear of Lewis Hamilton.

Mercedes sits in 3rd in the Constructor Standings with 505 points and are now 19 points behind Ferrari. A repeat of the results in Brazil will see Mercedes finish second.

Russell’s win also means Mercedes do not finish winless for the first time since 2011. Although barring a Hamilton win in Abu Dhabi it seems likely that Hamilton’s record of winning a race in every F1 season he has competed in, will end.

The 2022 F1 season ends in Abu Dhabi this weekend at the Yas Marina Circuit, the race has become synonymous with all the controversy that occurred when it hosted the season-ending race in 2021. 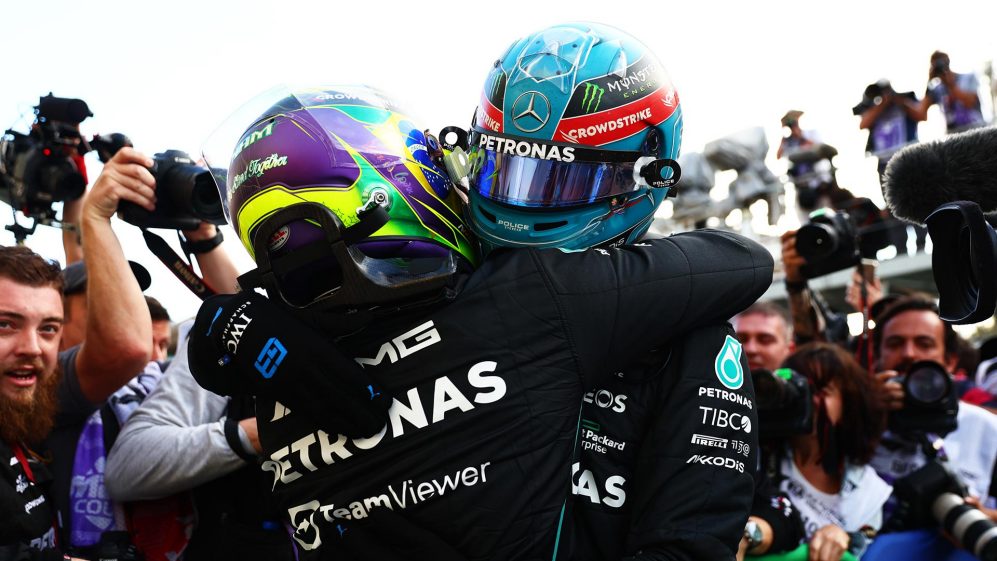