After nine consecutive years of dominance by Juventus, Inter Milan finally broke their stranglehold over Italian football in the 2020/21 season as the Nerazzurri secured the Serie A title. Last season the pendulum swung to the other side of Milan as the Rossoneri won the Scudetto for the first time in 11 years and drew level with Inter on 19 Serie A titles each.

The race for the title this year promises to be a fascinating battle as the three main contenders battle it out over the course of the season. However, they will have to contend with a few dark horses who will be looking to upset the balance of power in Italy. It will be a hard-fought campaign but who will end the year with the much-desired Scudetto?

Last year’s champions will be the team to beat this season. Crucially for the Rossoneri, they have not lost many of the key players who helped them secure the Scudetto last year. Franck Kessie and Alessio Romagnoli are significant departures but, players such as Fikayo Tomori, Theo Hernandez, Sandro Tonali and Rafael Leao still remain at the club after impressive seasons.

Talented young players like those just mentioned are a part of the blend of youth and experience that was so important to Milan’s title win. Seasoned veterans such as Oliver Giroud and Zlatan Ibrahimovic, who has signed a new contract which will take him past his 41st birthday, are serial winners who helped guide the younger players to what was for many their first title success.

The AC Milan squad are hungry for more with many players cutting their holidays short and starting pre-season earlier than scheduled in preparation for defending their Scudetto, which their manager Stefano Pioli believes they will do.

‘I am convinced that this is a cycle that has just started and not one that is about to end.’

Milan will be helped this season by new signings such as former Liverpool forward Divock Origi. The Belgian forward won 6 trophies during his time at Liverpool including the Premier League and the Champions League, where he scored the winning goal in the final. English fans will be all too aware of Origi’s knack for scoring important goals at important times and if he repeats the trick for the Rossoneri, it could be vital.

Charles De Ketelaere is an exciting young prospect who has joined Milan from Club Brugge for €36 million. De Ketelaere is a Belgian international and leaves Club Brugge having notched 18 goals and 10 assists during the 2021/22 season. During his time in Belgium, the forward has won the Belgian league three times and the Super Cup twice, meaning he will add both attacking flair and a winning mentality.

In addition to these two signings, Milan has made the loan deals of both Junior Messias and Alessandro Florenzi permanent showcasing Stefano Piolo’s desire for continuity from last season’s brilliant campaign. The champions certainly look in strong shape as they look ahead to beginning their Scudetto defence against Udinese at the iconic San Siro on Saturday.

The team who looks set to be AC Milan’s toughest challenger this year is their fierce rivals Inter Milan.

Just like AC Milan, Inter has so far been able to keep hold of the majority of their core squad which last season lost out on the Serie A title by just two points in Simone Inzaghi’s first season in charge.

The big loss for them of course is Ivan Perisic moving to Tottenham. His experience and quality will be missed in the dressing room but, even with his departure Inter still have a very strong side.

The Nerazzurri boast the likes of Lautaro Martinez, Milan Skriniar, Nicolo Barella and Alessandro Bastoni in their squad and over the course of the summer have added yet more quality to their ranks. The most noteworthy of their incomings is the return of striker Romelu Lukaku after an underwhelming season with Chelsea and has expressed his desire to come back in a bombshell interview with Sky Italia last December.

Lukaku scored 8 goals in 25 Premier League appearances last year, nowhere near the amount Chelsea was expecting from him which led to the West London club allowing him to move back to Serie A despite spending £90 million on him just one season prior.

Despite this, Lukaku’s return is huge for Inter as the Belgian netted 47 goals in 72 appearances over two seasons at San Siro and he will be looking to help the Nerazzurri prevent their rivals from securing back-to-back titles. Lukaku himself has a point to prove and is relishing the chance to get back to his best in the famous black and blue of Inter and make sure they have the Scudetto come to the season’s end.

‘The season at Chelsea gave me extra motivation to do even better than before,’

‘That is the kind of anger that I have inside me. That now the team has it too, which didn’t win last year, all together we hope to do better and bring something home.’

Romelu Lukaku is not the only notable arrival at Inter this summer. Former Borussia Dortmund and Manchester United playmaker Henrikh Mkhitaryan have joined the Nerazzurri on a free transfer from Roma and goalkeeper Andre Onana have arrived on a free transfer from Ajax. Midfielder Kristjan Asllani is an exciting young prospect with a strong passing game who has joined the club from Empoli on a loan with a buy obligation.

Inter Milan kick off their 2022/23 campaign away at Lecce on Saturday and will be looking to start with a win to put immediate pressure on their city rivals.

After such a prolonged period of dominance, it feels strange not to be talking about the Old Lady as the outright favourites to win their 37th Scudetto.

Despite Massimiliano Allegri returning as Bianconeri manager last year, Juve has finished in fourth place in Serie A for two consecutive seasons. Moreover, the 2021/22 season was their first without a trophy for 11 years.

Juventus have been busy in the transfer market as they look to create a squad that is capable of upstaging both Inter and AC Milan. A number of players have left, including some that are immensely talented such as Paulo Dybala and Matthijs De Ligt. Time will tell if that was a good decision but players of their quality are not easy to replace.

They have also lost one of their most influential players and a true club legend after Giorgio Chiellini decided it was time to move on. He will undoubtedly be sorely missed in the dressing room, on the pitch and in the stands.

Gleison Bremer is the defender that the Old Lady has signed to replace their outgoings. The Brazilian was voted Serie A Defender of the Year last season and on paper appears to be the exact defender that Juve needs. Perhaps crucially, Inter Milan was heavily interested in Bremer but Juventus beat them to his signature.

The most notable signing that the Bianconeri made was of course the return of Paul Pogba. Although, unfortunately, the French midfielder could be out until the new year with a knee injury. This will mean he misses a significant portion of the season and the World Cup. What impact this will have on Juve’s title chances remains to be seen.

Angel Di Maria has joined the club on a free transfer from Paris Saint Germain, he brings a wealth of title-winning experience from both his time in France and at Spanish giants Real Madrid with Juventus hoping his quality can replace that of Paulo Dybala’s. Alongside these new signings, Juve still has elite players in their ranks such as Serbian hitman Dusan Vlahovic, Italian winger Federico Chiesa and Brazilian fullback Alex Sandro.

Juventus got off to a poor start last season and will need to begin the season strong if they are to properly challenge Inter and AC Milan for the title. They get underway at home to Sassuolo on Monday night.

The two sides that could well prove capable of upsetting the three main title contenders in Italy are Roma and Napoli.

The 2022/23 campaign will be Jose Mourinho’s second season in charge of the Giallorossi having won the Europa Conference League last year in Roma’s first European final for 31 years.

Roma certainly cannot be completely ruled out of the title race as they have made marquee signings such as former Liverpool midfielder Georginio Wijnaldum on loan from PSG and Paulo Dybala on a free transfer from Juventus, could be come back to haunt the Bianconeri?

In addition, you simply cannot rule out Jose Mourinho. The Portuguese manager’s style seems to be perfectly suited to Italian football and over the past few years, he has had his critics, especially in England. He will be desperate to prove them wrong by leading the Giallorossi to their fourth Scudetto after last lifting the trophy in 2001.

Napoli was firmly involved in the title race last season and was only 7 points behind AC Milan in the final league standings. The issue for the Partenope is that they had a mid-season slump last year which would absolutely need to be avoided this season if they are to push for the title.

The biggest challenge for Napoli will be contending with the departures of Captain Lorenzo Insigne, centre-back colossus Kalidou Koulibaly and all-time leading goalscorer Dries Mertens. It also looks likely that they will lose Spanish playmaker Fabian Ruiz to PSG. If these players cannot be adequately replaced, it will be tough for Napoli to maintain a push for the Scudetto.

Serie A was once one of the most exciting leagues in Europe. With the battle for the Scudetto getting increasingly competitive, it seems that the Italian league is on its way back to its former glory. 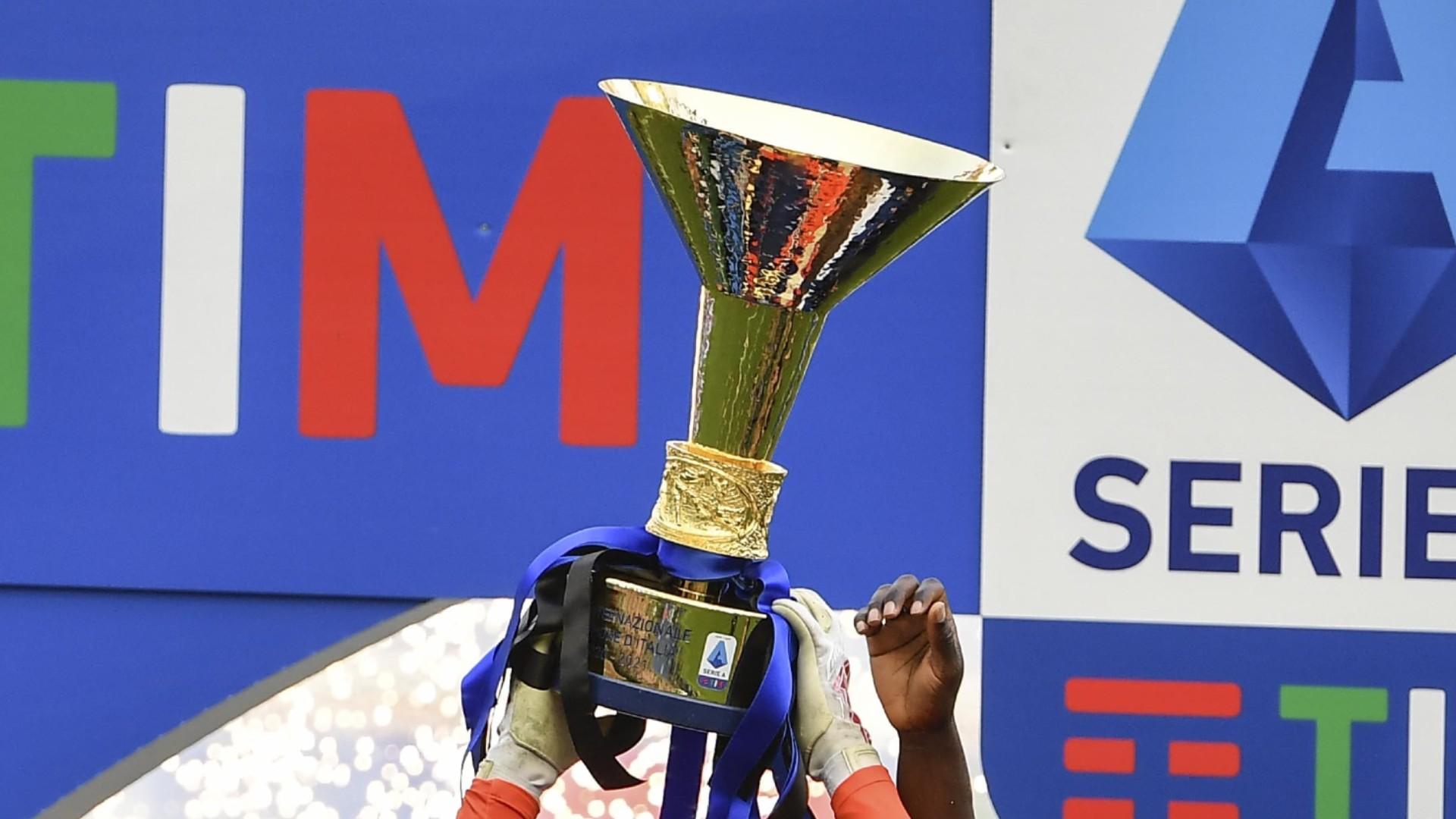