Wil Myers has been a rising star since his 2016 year with the San Diego Padres, which ended with him going to the All Star game for the first time in his career, Myers ended that season with 676 plate appearances and 28 home runs, which is more than double the amount of home runs he hit in previous years.

Myers hit a huge 2 out double to right center field to be the first Padres to get an extra-base hit in an All-Star game since Ken Caminiti in 1996.

His rise to success took off very quickly and his name was starting to show up everywhere. He was called the hometown hero after that hit during the All-Star game.

He signed an 83 million dollar six-year contract before the 2017 season, which is the most rewarding contract in Padre history. This being said, would he have made more money if he went to another team?

Should he have signed a shorter deal and explore his options with a different team and with a higher pay-day?

If you are a Padres fan, like me, you are happy with having him in San Diego for 6 years, but is that really the best deal that he could have received?

I believe that he made the right decision to stay in San Diego and sign that 83 million dollar deal. San Diego is a great place to live, lots to do, great fans, and one of the most beautiful ball parks in all of baseball. Myers has the chance to be the face of the Padres for the next six years. I don’t believe he would have the same opportunity if he went elsewhere.

The Padres have been rebuilding for quite some time now, and the fans are starting to get restless for even a slither of success. Myers is giving Padres fans a look into that success. Fans are used to the Padres getting a great player only to trade them to another club for some minor leaguers that we don’t even know.

The extension of Myers definitely calmed some of the fans and gives them an All-Star player to cheer for.

Now on to the question if Myers did play with another club would he be a bigger star?

I think this statement is true. San Diego has a smaller salary cap, lower fan base, and is not known for keeping high caliber players since the team is still rebuilding.

If he happened to play for another team like the Yankees, or the Angels I do believe that his name would be a lot bigger than it is now. The Padres are building the team around Myers and hope to make it back to the playoffs in the near future.

The Padres this year have started slowly and are 5th in the NL West, yet fans still seem to be engaged.

I think this is due to the success with the long ball, Myers contributions, and the fact that our roster has some of the best rookie in baseball this year. It takes time to rebuild a team, but I think we are definitely on the right path. Yes, Myers would be a bigger name if he played for a higher caliber team, but he set himself up well only being 26 years old and a six year contract.

He will still be young at the end of the contract and could always stay in San Diego or move on to a new team. Myers is a huge step to getting San Diego back in the pennant race, which the Padres haven’t seen since the 2006 season, where they lost to the Cardinals in the NLDS.

There is no doubt that Myers is an All-Star player and could be a bigger star elsewhere, but his home is San Diego at this point of his career is the smartest decision he could have made. 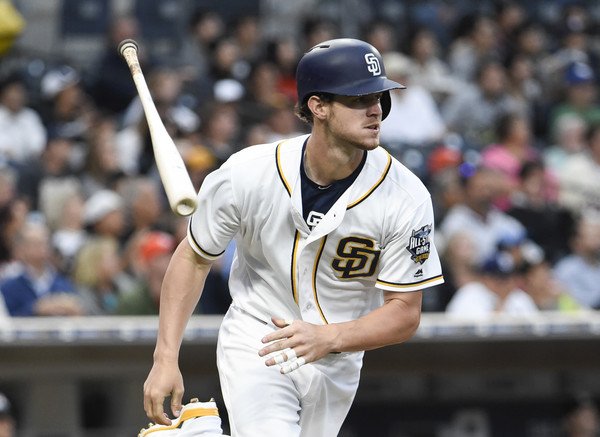