“We are back.” This was Gerard Pique’s summation after Barcelona’s resounding victory inside the Santiago Bernabeu in the latest ‘Clasico’ versus arch nemeses Real Madrid on Sunday night. A brace from Pierre-Emerick Aubameyang and goals from Ferran Torres and Ronald Araujo secured a dominant 4-0 away win for the Catalans in a match that harkened back to similar thrashings they have dished out to Los Blancos in the past near-decade and a half.

Pique himself was involved in some of those commanding wins; 6-2 and 4-0 victories away at the Bernabeu in 2009 and 2015 respectively, either side of a 5-0 dismantling of Madrid at the Camp Nou in 2010. However, after a run of six games without a win and five straight defeats in the famous fixture, those historic results would not have been further from his, or anyone associated with Barcelona’s, mind.

Barca’s shocking form against their eternal rivals in recent years has been indicative of their major decline during the final stages of the Lionel Messi era and the hopelessness surrounding the club immediately after his exit. Total mismanagement on the pitch was a symptom of the even greater mismanagement at boardroom level which sent FC Barcelona into a spiral that has resulted in them coming as close as you can imagine a modern-day superclub coming to financial and existential oblivion.

That being said, the arrival of club legend Xavi as the new head coach and the impressively savvy January transfer market dealings had lifted the mood around the club and had Barca fans hopeful once again. A fantastic start to 2022 for the Catalan giants, in which they notched four goals on five occasions since the beginning of February and have navigated their way into the final eight of the Europa League, built on this and had Culers heading into Sunday evening’s clash with genuine optimism.

Xavi stuck with the tactical principles that have re-energised Barca over the past few months as his team took to the field at the Bernabeu. Since his arrival, the new Barcelona coach has placed a huge emphasis on his wingers. Xavi stations his wide men very high and wide, always in close proximity to the touchline and occupying the opposing full-back. The purpose of this is to isolate the wingers’ markers who have little chance at being able to stop such quick and dynamic dribblers as Ousmane Dembele and Adama Traore in one-on-one duels; a strategic development that has reinvigorated Dembele and accentuated Traore’s foremost attributes.

This game plan was evident in the build-up to Barcelona’s first goal. Dembele picked up the ball wide on the right with only an ageing utility full-back in Nacho Fernandes to defend against him. Dembele breezed past the Spanish defender, as he is so capable of doing, and delivered a perfect cross for Pierre-Emerick Aubameyang to head home; furthering the Gabon international’s fantastic start to life in Barcelona, having now scored seven goals in seven La Liga appearances for his new club.

Xavi’s team also demonstrate greater verticality in their play than you would typically associate with Barcelona teams, especially the ones that the diminutive Spaniard was famous for orchestrating as a player. Central defenders like Pique, Ronald Araujo and Eric Garcia have licence to play long passes, generally to the wide players to exploit the wingers’ aforementioned abilities when facing up an exposed full-back.

These more direct passes not only look for the wide forwards, however. The centre-backs and Sergio Busquets also tend to play more vertical passes to find midfield runs from deep, generally from Pedri and Frenkie De Jong, who often make these late runs to form a front five with Aubameyang and the wingers. Taking advantage of the stretched opposition defence caused by the positions of the wingers, these front-foot midfielders’ propensity to play in the attacking half spaces at the edges of the opponents’ box and even break beyond the defence into goal scoring positions is a fundamental aspect of Xavi’s philosophy and caused Madrid’s defence a great deal of trouble throughout Sunday’s Clasico.

With Dembele and, in this game, Ferran Torres hugging the touchline, Barcelona’s full-backs have shifted away from the marauding, overlapping style they are used to playing. In possession, they now occupy more interior positions in the defensive half-spaces on either side of Sergio Busquets to facilitate build-up and create a quasi 2-3-5 formation that has come to be associated with Pep Guardiola’s Manchester City in recent years. Jordi Alba and makeshift right-back Ronald Araujo executed this very well and offered a platform for the front five to pick holes in Madrid’s defence.

The other tactical reason for the narrowing of Barcelona’s full-backs is to offer more solidity against opposition counter-attacks through the middle of the pitch. This was an approach that Ancelotti’s Madrid was clearly trying to utilise with Vinicius Jr and Rodrygo operating almost as split strikers in a 4-4-2 diamond formation when their team had the ball. However, due to the way Xavi set his team up, the two inverted wingers didn’t get any change out of Barca’s defence.

In the absence of talismanic forward Karim Benzema, Ancelotti opted to play Luka Modric in a role somewhere between a false nine and a number ten. In this alien position, Modric seemed lost, and he and Toni Kroos weren’t able to assert their usual control and tempo on proceedings.

Out of possession, Kroos tended to push up alongside Modric as Madrid’s most advanced pressers in a sort of 4-2-2-2 or 4-2-4 set up, similar to the way in which Ralf Rangnick deployed Bruno Fernandes and Paul Pogba in the Manchester derby defeat to City earlier this month. In both of those examples, dynamic off-the-ball pressing is not the trait most associated with either of those pairs of players. As with City, Barcelona did not struggle to play through, over or around Madrid’s disjointed press and attack Los Blancos’ creaking backline.

For Ancelotti and Real Madrid, it is alarming that the absence of an admittedly world-class but ageing centre-forward can cause such shockwaves throughout the system and the performance of the other players. The Italian coach will be hopeful that his star striker is available for the Champions League quarter-final clash with holders Chelsea in early April because, as seen on Sunday in the Bernabeu, Benzema remains completely irreplaceable within his squad.

For Xavi and Barcelona, whilst the importance of this win is likely minimal in terms of the context of the league (there will be no claims of ‘hay liga’ around Camp Nou off the back of this result), its emotional significance cannot be overstated. Since Xavi’s arrival in November, Barca have now taken more points than Real Madrid in league football. This, in addition to Sunday’s performance, will no doubt have Barcelona players and fans believing that they are once again ready to compete on the domestic, and potentially even European fronts; hence Gerard Pique’s declaration that his team ‘are back’.

As previously mentioned, each of Barcelona’s most successful head coaches of modern times; Johan Cruyff, Pep Guardiola and Luis Enrique, have presided over big El Clasico wins during their time in charge. Xavi has now followed in their footsteps in his first league match versus Barca’s biggest rivals. And although this game was evocative of those previous encounters, it differed in the sense that those wins seemed to be culminations of Barcelona’s dominance; confirming what we already knew. This display, despite the team’s impressive form, was much more unexpected but, hopefully for Barcelona fans, represented a seminal performance; a sign of things to come.

The way in which Xavi and his players can ensure that Sunday evening’s win was just that is to build on it. However, it doesn’t get much easier for the Catalans. Up next is a Sevilla side that sits one place above them in the La Liga table. A difficult game, but one that Barca will now be expected to win at home given the brimming confidence the players must have taken away from the Santiago Bernabeu.

After the progress that the team have made since the turn of the year and such a dominating victory over their biggest rival who remain one of Europe’s premier teams, it is hard to argue with Gerard Pique’s assessment. Whilst this young group of players still have a long way to go before Pique’s assertion that Barca are back (especially compared to the lofty standards they previously set for themselves) is proven correct, under Xavi, they are certainly heading in the right direction back to the top. 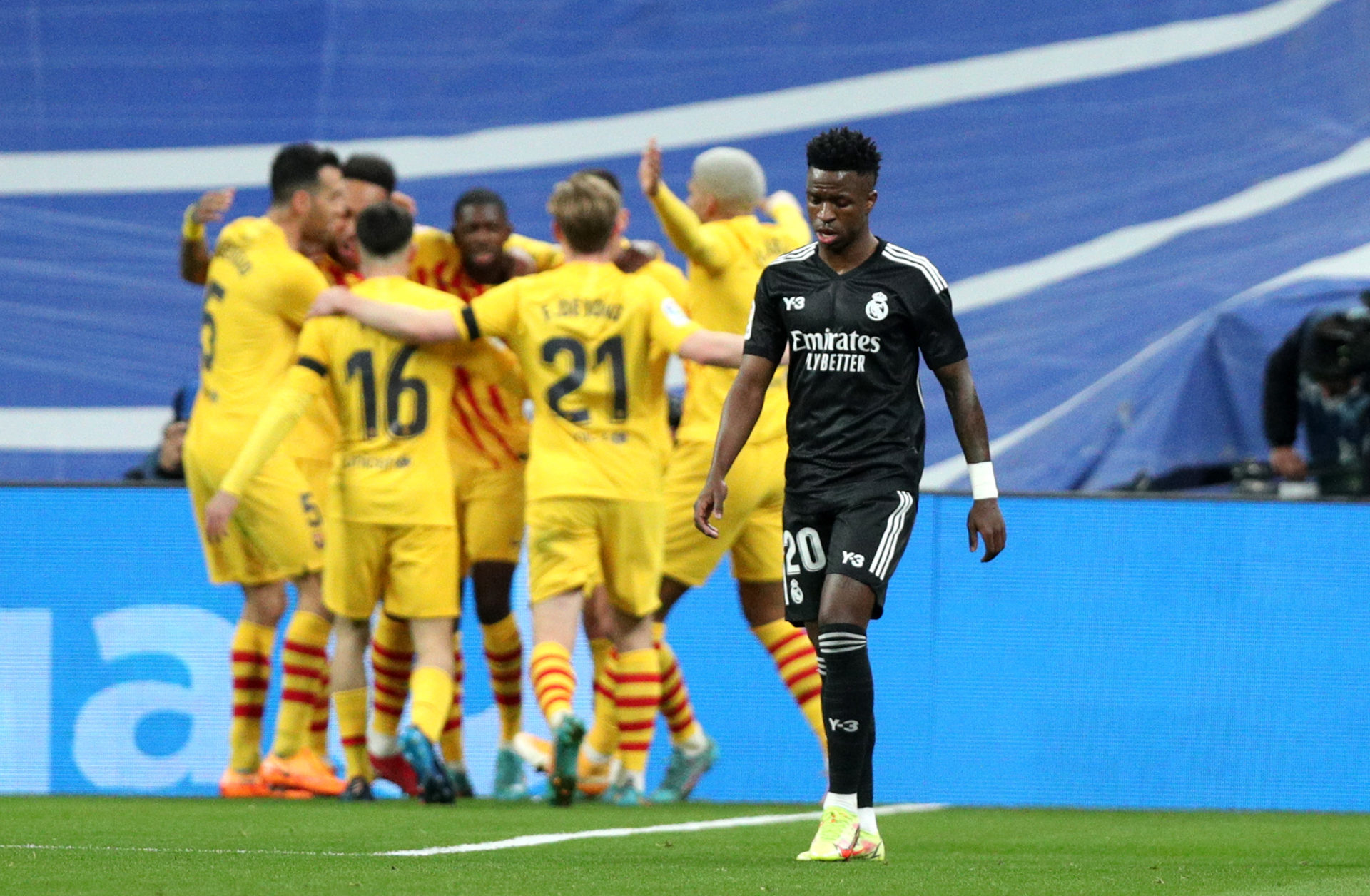