Denny Hamlin held off Brad Keselowski at Kansas to win for the fifth time this season, becoming the driver with the most wins in 2020.

The Joe Gibbs Racing driver, who had already led 44 laps earlier in the race, overtook Kevin Harvick with only 13 to go to take the lead for the final time. At that point, it looked like the three-time Daytona 500 winner was in control, but he still had to fend off a late-race challenge from Brad Keselowski. Despite having a faster car at the end, Keselowski wasn’t able to get close enough to make a move.

The win on Thursday night is not only Denny Hamlin’s second consecutive win at Kansas, but also his fifth of the season, which makes him the driver with the most trips to victory lane in 2020. It is also Hamlin’s 42nd career win and comes after a tough stretch of races for the #11 team, which, despite its recent success, had finished the last three races outside of the top ten.

Even though he was faster than Hamlin in the last ten laps, stage two winner Brad Keselowski had to settle for second place. The Team Penske driver was one of seven drivers who led for more than 15 laps on Thursday night (with Hamlin leading a race-high 57 laps), but ran out of time at the end. The 2012 Cup Series champion led 30 laps, 14 less than Martin Truex Jr, who finished in third place.

Polesitter Kevin Harvick lost several spots in the closing stages, finishing fourth. The Stewart-Haas driver was in the lower half of the top ten for most of the race, but managed to make his way to the front in the last segment, before a brilliant final restart saw him overtake both Alex Bowman and William Byron to take the lead with less than 20 laps to go. However, the three-time Kansas winner had a very loose car at the end of the race and couldn’t keep up with the drivers who finished in the top three.

Erik Jones made it three Joe Gibbs Toyotas in the top five. Last year’s Southern 500 winner had a great night at Kansas, gaining a lot of points on the other drivers who are trying to make the playoffs. Nevertheless, Jones is still 12 points below the playoff cutline. Aric Almirola came home sixth to continue his impressive run of results, ahead of teammate and Kentucky winner Cole Custer.

The best Chevrolet driver at the end of the race, Alex Bowman actually lined up first for the final restart, alongside William Byron, with the two having changed only two tires on their final trip to pit road. However, neither of them were able to hold off the drivers who spent the majority of the race battling for the win. Bowman finished in eighth place and Byron rounded out the top ten.

Kyle Busch, who won stage one and led 52 laps, wound up 11th after hitting the wall in the last segment. Despite that mistake, the Cup Series champion had one of his best races of the season, scoring his first playoff point. Ryan Blaney was also in the mix late on but a flat tire took him out of contention, while Penske teammate Joey Logano crashed out after leading early on.

The Super Start Batteries 400 had 11 cautions and was red-flagged due to a scary accident on Lap 172, that involved Ryan Newman, Christopher Bell, Chris Buescher and Ryan Preece, whose car hit the inside barrier and almost landed on its roof. Preece walked away unscathed. 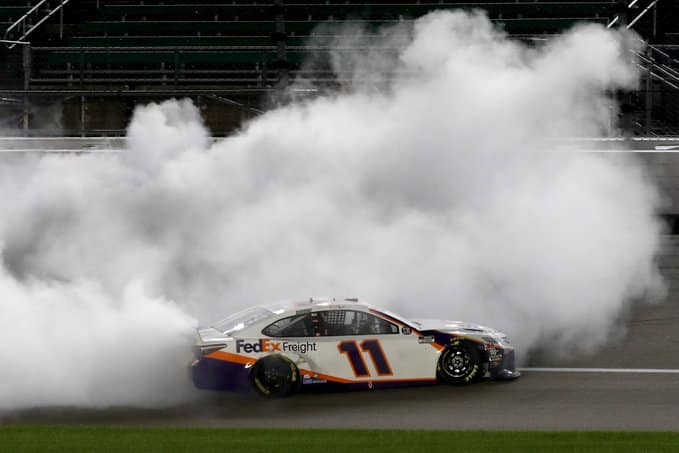