The Formula One season is about to get underway with the Pre-Season testing at Bahrain. Like every season, the 2021 season will feature multiple storylines. Who will win the championship? Who will be the most improved driver? Who will have the best season out of everyone? But most importantly, the 2021 season begins with a few drivers that have swords hanging on their heads. Drivers that might be in danger of losing their current seat in Formula One. Every year there is someone who loses their seat either due to a lack of performance or due to monetary reasons or sometimes it’s purely down to bad luck. Today, let’s look at 5 drivers that could lose their seats at the end of the season.

Valterri Bottas’s formula one seasons follow a specific blueprint. A fast start and a win or two at the early stages of the season, a one-year extension on his contract, and then a slump in form as everyone on the grid contemplates whether a better driver in Bottas’ spot might pose a bigger challenge to Lewis Hamilton. At the start of almost every season, Bottas has talked about how he had to do a lot of thinking during the winter and would approach the season as a changed man.

But then every season we see the gulf between Bottas and Hamilton grow larger and larger. Bottas is a good driver, he’s easily one of the top 10 drivers on the grid. However, he’s not the best talent on the grid and some drivers are clearly better than him in Formula One. Bottas has been able to hold on to his seat at Mercedes partially because Hamilton needs a wingman and Mercedes are too scared of having a repeat of what happened with Nico Rosberg and Lewis Hamilton.

However, there are clear indications of Mercedes looking at options beyond Hamilton for the future. To add to this, George Russell, on short notice, put Valteri Bottas in his place at the Sakhir GP and would be on Mercedes’ radar for the future as well. If there was a season where Bottas needed to be a changed man then it has to be this season because if he doesn’t, he might be looking at his last season as the Mercedes Formula One driver.

Esteban Ocon’s return to Formula One has not been pleasant. In his first year with Renault, he was teamed up with Daniel Ricciardo, one of the best drivers on the grid. He was practically outclassed by the Australian throughout the season. In his second season, he’s getting teamed up with Fernando Alonso, a Formula One legend with a history of destroying multiple up-and-coming prospects as his teammates.

Sure Alonso is close to 40 and has been away from Formula One for two years but expecting his performance to drop off all of a sudden would be a mistake. Ocon is in his second year with the team, the last of his contract. Pierre Gasly, another Frenchman, is lurking in the shadows at Alpha Tauri with a much lower benchmark in Yuki Tsunoda as his teammate.

The situation is not dire but it is far from ideal for Ocon. If he needs to stick around at Alpine for another season he needs to start beating Fernando Alonso and show Alpine that they have a future world champion in their ranks who could lead the team. Esteban Ocon beat Max Verstappen to win the Formula three title in 2015. He came to Formula One with a lot of hype behind him but all the hype has died down. 2021 would be a crucial season for Ocon. If he can beat Fernando Alonso in the same car he would prove his worth. If he doesn’t beat Alonso we might see Pierre Gasly driving the Alpine F1 car next season.

He has to try and match if not beat Max Verstappen, arguably the most talented driver on the grid in a team that has been molded around him. And he has to do it in a team that has an unforgiving attitude to underperformance, a team where drivers can feel the pressure of performing at a very high level.

Perez, on his part, has been an experienced campaigner throughout his career. If you look at his career closely he has had a favorable record against all but one of his teammates when he partnered Jenson Button at McLaren. He’s consistent, he’s fast, moreover, he knows how to manage a race. Some of these traits even Max Verstappen would do well to pick up on. Perez has amassed more than 10 visits to the podium despite not even once driving for a front-running team.

The problem though lies in the fact that Verstappen is not your ordinary driver. He’s one of the fastest if not the fastest drivers on the grid. The level at which he’s operating, it’s hard to expect anyone to beat him in the same car. No driver with the right mentality is happy with coming second best to their teammate. But this was why things unraveled for both Albon and Gasly who consistently tried to beat Verstappen and when they weren’t able to they became desperate in their quest to beat Verstappen and ended up making uncharacteristic mistakes.

Perez is an experienced professional. He’s seen it all in his career. But the kind of beating that Verstappen is capable of putting on his teammate, Perez hasn’t faced before. With the amount of time he has spent in Formula One, he should be able to do well at Red Bull. But losing to your teammate regularly with no hope of turning it around is a lonely place to be. Gasly and Albon imploded because of this and lost their seat. If Perez does the same then Red Bull would be keeping an eye open on a possible prospect next to Verstappen.

It’s a bit of a surprise that Antonio Giovinazzi was still retained by Alfa Romeo after what was a pretty average season in 2020. Looking at Giovinazzi’s junior category career. It’s hard to see why he hasn’t made the kind of impact he was expected to. He almost beat Pierre Gasly in the battle to the title in GP2. Ever since, he was touted to do great things once he got a seat in Formula One, maybe even a Ferrari drive in the future.

However, his time at Alfa Romeo has been anything but impressive. He seems to lack the raw pace that you would expect from a young driver. He seems to lack the racecraft that would help him make up places in the race. He hasn’t fared that well against a Kimi Raikkonen that is multiple years past his prime. Mick Schumacher is making his debut with Haas this year. There are multiple Ferrari Driver Academy prospects competing in Formula 2. If this is the ceiling of his talents then Alfa Romeo might just be looking at replacing Antonio Giovinazzi with one of their younger drivers in 2022.

George Russell did himself a favor by beating Valteri Bottas at the Sakhir GP. However, it almost seems as if Russell’s fate is not in his hands anymore. If Lewis Hamilton is retained beyond 2021 then there is a high probability that Mercedes could give Bottas another year as a wingman to Hamilton.  On the other hand, Alpine is expected to turn Williams into its sister team as Williams is expected to move to Renault engines. Although great news for Williams, it might not be that good for Russell as Alpine has their own driver development program and would be looking at Williams to accommodate the drivers from this program.

With drivers like Christian Lundgaard and Oscar Piastri competing in Formula 2, they could impress enough to find a way into Formula One. With Nicholas Latifi bringing in huge investment, George Russell could be the one facing the ax.

So these are the five drivers that I feel could be in danger of losing their seats in Formula One. Did I miss someone? Do let me know and share your views in the comments section. 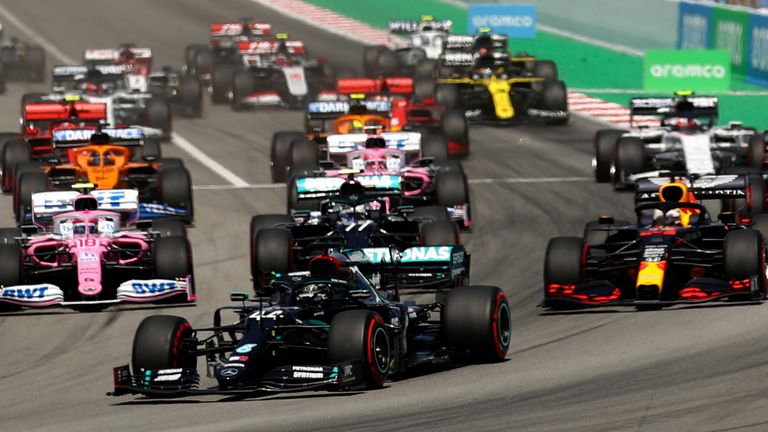